Taste of Chicago kicks off in Grant Park on hottest day of the year, high temps cause issues throughout city 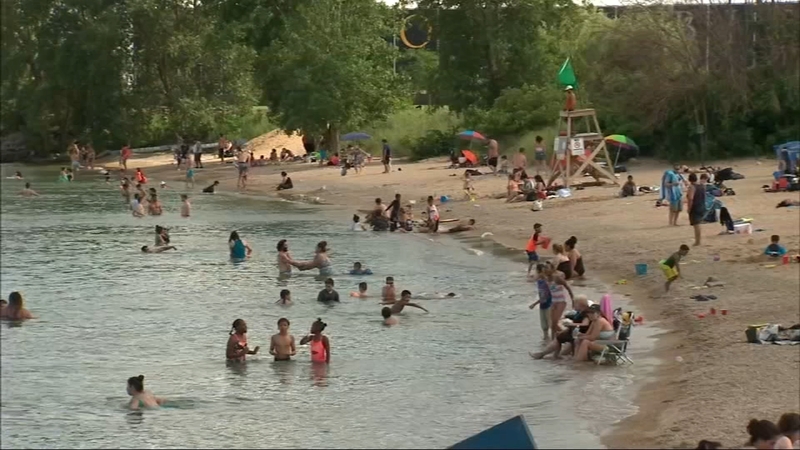 Taste of Chicago kicks off on hottest day of the year, high temps cause issues throughout city

CHICAGO (WLS) -- Wednesday was the hottest day of the year, and the high temperatures caused problems throughout the city, from the roadways to public transit to the first day of Chicago's flagship food festival.

The 39th Annual Taste of Chicago kicked off Wednesday in Grant Park. Officials with Chicago Fire Department said there at least eight people were transported or treated for heat-related illness.

Officials with Chicago Fire Department said there have been at least five people who have been transported or treated for heat-related illness Wednesday.

It's unclear the conditions of each of the five people but the message is clear - if you don't take the proper precautions, including staying hydrated or limiting your exposure to sun, things can take a dangerous turn.

On the 92nd Street Bridge, firefighters had to hose down the swing bridge to keep it from expanding.

The South Shore Line was put on a high temperature speed restriction, delaying commuters on the ride home.

"It feels as if it's a million degrees," said Lorelai Rivera, commuter.

At the Taste of Chicago, emergency officials were stationed throughout Grant Park, assisting with the many who succumbed to heat-related illnesses. Many sought shade trying to escape the heat.

"I'm very glad I brought this umbrella," said attendee Lesley West. "Otherwise I'd probably be having to get transported as well because it's really hot out here."

This year, 80 restaurants will participate in the festival, including 24 pop-ups and 17 food trucks. The city said 36 of the participating food vendors are new.

More than 80 eateries will participate at this year's Taste, including:

ABC 7's Steve Dolinsky has some special menu items that visitors can sample this year.

The 39th Annual Taste of Chicago kicked off Wednesday in Grant Park.

High energy and a taste of Africa from Uptown's Iyanze is where you can find Caribbean-influenced coconut rice served as a starchy base for tender stewed goat with sautéed peppers and onions.

Seoul Taco has been to the annual event as a pop-up, but this year they're staying all five days. Their bulgogi tacos offer a mashup of Mexico-meets-Korea.

Across the street, another new vendor, Buscia's, brings its Polish and Lithuanian-influenced cheddar bacon bun to Taste.

The Petrillo Music Shell will feature a diverse mix of musical acts, including De La Soul, The Strumbellas and India.Arie. Opening acts include Sunflower Bean, Taylor Bennett and Joywave. Concerts begin at 5:30 p.m. Wednesday through Friday and at 4:30 p.m. on Saturday and Sunday.

Watch to see the Brazilian Bowl Inc. and Luella's Gospel Bird show dishes you can "taste" at the festival!

The 39th Annual Taste of Chicago will be held at Grant Park, July 10th- July 14th in the Chicago Loop.

Tickets to the main stage are generally $25 to 50.

"You have to pay for your food and drink, but there are experiences and activities everywhere," said Mark Kelly, commissioner for the Chicago Department of Cultural Affairs and Special Events.

The Taste runs until Sunday in Grant Park. Weekday hours are 11 a.m. to 9 p.m. and from 10 a.m. to 9 p.m. on Saturday and Sunday.
Admission to the Taste is free and tickets for food and beverages can be purchased in strips of 14 for $10.

Chicago Police Department and the city is also keeping a watchful eye with extra security measures in place for the festival.

There are more cameras in Grant Park and on mass transit, as well as evacuation plans in case of weather emergencies, including loudspeakers through-out the park.

HEADS UP: Metra adds service on some lines for Taste of Chicago