Gary police sergeant wounded in shooting; 1 suspect in custody, another on run 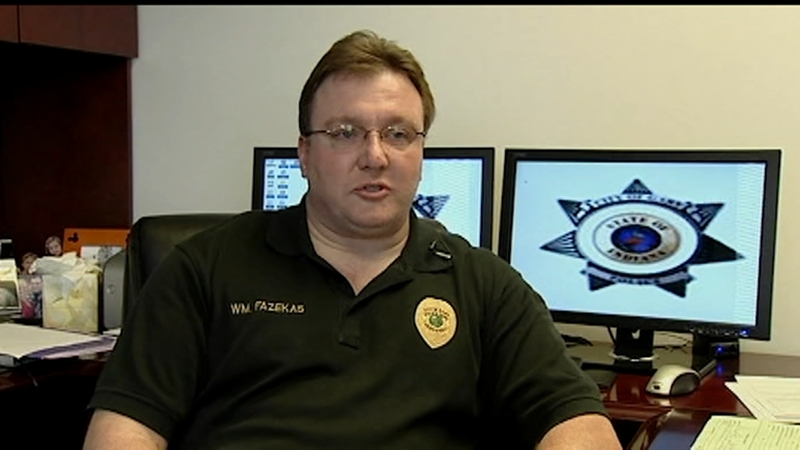 Gary police officer shot; 1 suspect in custody, another on run

GARY, Ind. (WLS) -- One suspect is in custody and a person of interest remains at large after a Gary police officer was shot Monday afternoon.

The officer was shot in the shoulder near 5th Avenue and Lincoln Street in Gary around 12:57 p.m., Gary Police Chief Brian Evans said.

The officer who was shot is Sgt. William Fazekas, a 32-year veteran of the force currently assigned to the violent crimes division, Evans said.

Fazekas, whom ABC7 has interviewed in the past, was on routine duty when police said he encountered gunfire.

"The officer observed a vehicle strike another vehicle, and then when he engaged, which is activating his lights to see what was going on, to render aid or whatever needs to happen, the individuals opened fire on him," Evans said.

Fazekas was struck in the left shoulder and rushed to a hospital while Gary police and the Lake County Sheriff's Dept. scoured the area for the shooters, searching on the ground with dogs and from the air with a chopper.

Police eventually apprehended a suspect at a nearby abandoned building, but another person of interest remains at large. Police have not shared a description of who they are looking for.

"I am appreciative of all the officers who responded to the scene, and as the chief suggested, this is an ongoing investigation," Gary Mayor Jerome Prince said.

Fazekas is said to be doing well and is with family. His condition has stabilized and he was transferred to a hospital in Chicago for further treatment, Evans said.

"This is something that is one of the dangers of traffic stops and dangers of being police, but we are committed to making sure that you're safe and committed to doing our jobs, and we thank the community for their support," Evans said.

Police said Fazekas returned fire, though it was unclear if he struck anyone. The Lake County Sheriff's Department is investigating the shooting at the request of Gary police.
Statement from Mayor Jerome A. Prince on injured Gary Police Officer:
Earlier today, a veteran Gary Police Department officer sustained a gunshot wound while responding to a call in the city. While we will not share the officer's name at this time, I am thankful the officer is in stable condition, and he is receiving the best possible medical care. I visited with the officer briefly, and I am relieved to say he is doing well.
Working with deputies from the Lake County Sheriff's office, our Gary Police Department has apprehended a suspect in this incident. Please remember this is an active investigation, and we will limit the information we release from City Hall in support of that investigation.
Our Gary Police Department has made significant progress in making our city safer, but, as today reminds us, our dedicated men and women on the police force put their lives and well-being on the line every day to serve and protect us. It can be dangerous work, and I thank each and every one of them.
Report a correction or typo
Related topics:
garysearchmanhuntshootingpolice officer shot
Copyright © 2022 WLS-TV. All Rights Reserved.
POLICE OFFICER SHOT
'Run to Remember' honors CPD officers killed, injured in line of duty
Man found guilty in fatal Rockford shooting of McHenry County deputy
Suspect charged in traffic stop, shootout that injured 2 CPD officers
2 officers injured, 1 suspect shot in East Garfield Park incident: CPD
TOP STORIES
Uvalde victims latest: Slain teacher's husband dies of heart attack
Chicago moves to CDC's high risk level, along with several counties
Family of unarmed 13-year-old shot by CPD files lawsuit
Onlookers urged police to charge into TX school: 'Go in there!'
2 charged in Skokie murder, attempted murder of 2 young boys
'Goodfellas' and 'Field of Dreams' actor Ray Liotta dies at 67
Several companies pull products linked to Jif peanut butter recall
Show More
FL school recognizes 1st African-American valedictorian, salutatorian
Illinois reports 6,358 new coronavirus cases, 2 deaths
LIVE RADAR: Chicago area under threat of severe weather for 2nd day
Dolton police shoot man after gas station argument
Illinois Primary Election: Meet the candidates
More TOP STORIES News