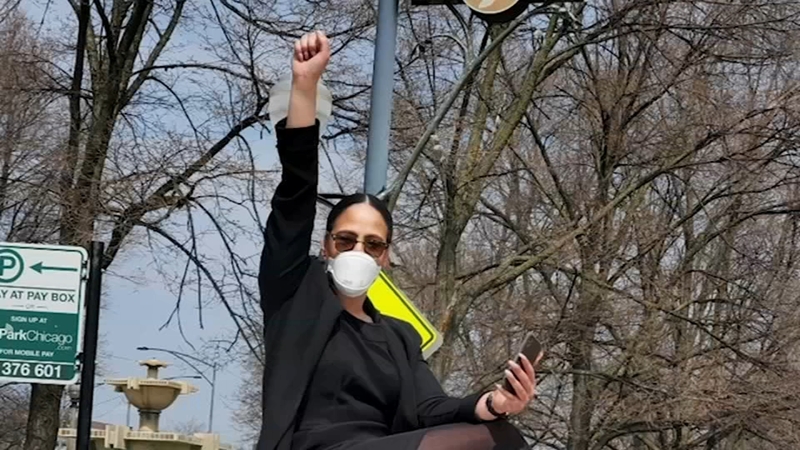 CHICAGO (WLS) -- She is only 29 years old, and just three years out of DePaul Law School.

Regardless of her admittedly rookie status, Cierra Norris has accomplished in the past few weeks what some criminal defense attorneys could only hope for: she has single-handedly managed to get almost a dozen inmates freed from the Cook County Jail.

Cook County Jail isn't loaded with prisoners "doing their time." Although many are felons and some have extensive criminal records, in the eyes of the law they are presumed innocent of the charges that landed them behind bars this time. Most are waiting for trial, unable to make bond.

With a charming yet deceivingly bulldog style, Norris has convinced multiple county judges that numerous detainees - including one woman - should be allowed bond because of the COVID-19 risk. It started with a couple of her own criminal clients and then she went to bat for others.

Her personal backstory, which she is hesitant to tell because she says the focus should be on detainees in a broken system, is nonetheless hypnotic.

It is centered at what has become a major focus of the fight against COVID-19, Cook County Jail. Coronavirus has infected hundreds there and killed several. Across metro Chicago more than a thousand prisoners and staff have been sickened by the pandemic-level virus, leaving inmates desperate to get out on bond.

"We got seven people out that first week," Norris told the ABC7 I-Team. "Then once people started hearing about what we were doing, we started getting calls to come in on cases that weren't ours."

Now, Norris has extracted 10 detainees from the Cook County Jail, putting them outside the danger of a quickly spreading jailhouse coronavirus outbreak.

"I started reaching out to different public defenders and different lawyers across the nation and started getting some examples of COVID-19 emergency motions. And we wanted to wait for something else specific to Cook County," she said in an interview in her Loop office.

After the first positive COVID test in the jail on Sunday, March 22, Norris said she got on the phone and then went to court.

"We never stopped going to court even when they shut court down," she said. "And we had to go before at least 20 different judges in over 20 different hearings for people."

The pace has been nonstop, according to Norris. And she is preparing for "round two" of hearings that will attempt to secure freedom for additional detainees.

Keith Spencer is one of her "guys" as she calls them; he was locked up on gun and drug possession charges. He told the I-Team he never imagined that any attorney would be successful getting him out on bond.

"I was scared of my safety," Spencer said. "And my health, because I do have asthma."

His new attorney, Norris, always wanted to be an attorney, but never wanted to juggle some roles she now plays.

"I did not sign up to tell people that they would have to pay the ultimate price for this..." Norris said, describing the life-and-death situation faced by her clients still in the county lock-up.

But when asked what motivates her to be so aggressive in trying to find freedom for accused criminals, she is hesitant to turn the spotlight on herself.

"This fight is really personal for me," she said with the glisten of tears in her eyes. "I had a son when I was 16. His dad came out of the inner city of Detroit. I read a statistic that said that just because my son came from me it didn't matter what his dreams were or what his favorite color was, he had a 90% chance of going to jail between 19 and 25 just because he was a product of a black single mom. And I said: over my dead body."

Even as her most recently freed client, Keith Spencer promises "not to put myself in the situation like that again" and return to jail. It's what he calls "a scary situation to be in." Norris has a street-philosophy about the whole thing.

"Sometimes it's easy to forget that when you have this idea of like, oh, we're releasing all these criminals. No we're not," she said. "We're releasing uncles and brothers and sisters, and nephews and sons, who are cloaked in a presumption of innocence and if it was anybody else's nephew, or, or son or daughter, they would - they wouldn't care what the crime was - they would want them home."

As coronavirus cases at the Cook County Jail take lives and climb to more than 700 staff and detainees infected, Norris said she draws deep to deal with it all.

"I've become a superhero," she said of her role with the families of detainees. She has also become "a therapist" and "a mom to moms that are older than me."

"I've become things that I didn't know I was going to have to become when I signed up for this job because of the pandemic," she added.

Many of Norris' clients, and the hundreds of others released on bond, are now tied to electronic monitors - and none of them should be considered off the hook.