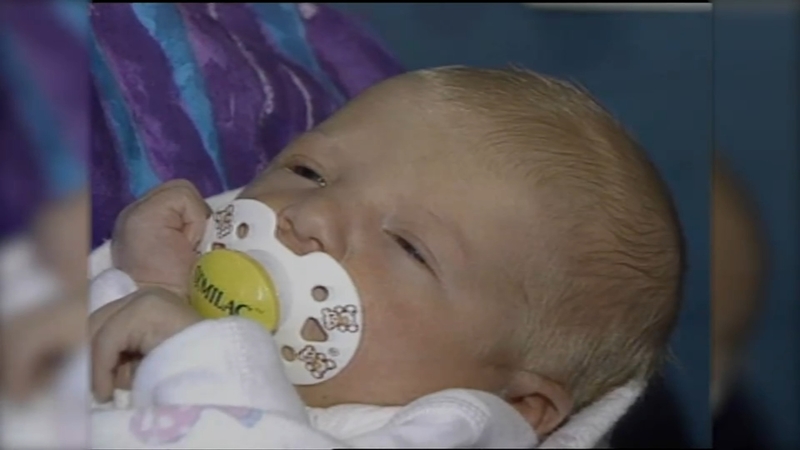 HOFFMAN ESTATES, Ill. (WLS) -- Morgan Hill was left for dead in a dumpster behind a Hoffman Estates hospital the day she was born. Now she's grown up to become a living advocate for the nation's Safe Haven laws.

"She fed me and cleaned me, but ended up putting me in a trash bag double knotted at the top and throwing me in a dumpster," Hill said. "A construction worker that was doing work on the hospital was throwing away debris, ended up finding me. He heard a little whimper, saw the bag move."

Hill's unlikely story of survival made headlines. The nurses who cared for her gave her the nickname Baby Mary Grace. She was adopted and grew up in a loving family in north suburban Cary, and eventually came to find out her story, meet her biological father and siblings, and even the construction worker who found her.

"It's been a blessing, it really has," she said. "I had a phenomenal childhood. Great parents, great family. I wouldn't trade them for the world."

Hill joined the Chicago Police Department and Save Abandoned Babies Foundation Wednesday to remind young mothers they have the option to legally relinquish their babies as long as they are unharmed and younger than 30 days old.

"There is help out there. And you can go to again, any one of our police stations, any one of the fire stations, knock on the door, hand the child over and there is no questions asked," said Glen Brooks, Chicago Police Department.

Zoe Wituk, now 7, was adopted in 2015 just days after her mother gave her up by calling an ambulance to her home.

"She was left with paramedics in Chicago Heights. The birth mom just had her and said, 'Here, I can't do this, I want to do Safe Haven,'" said Brian Wituk, adoptive father.