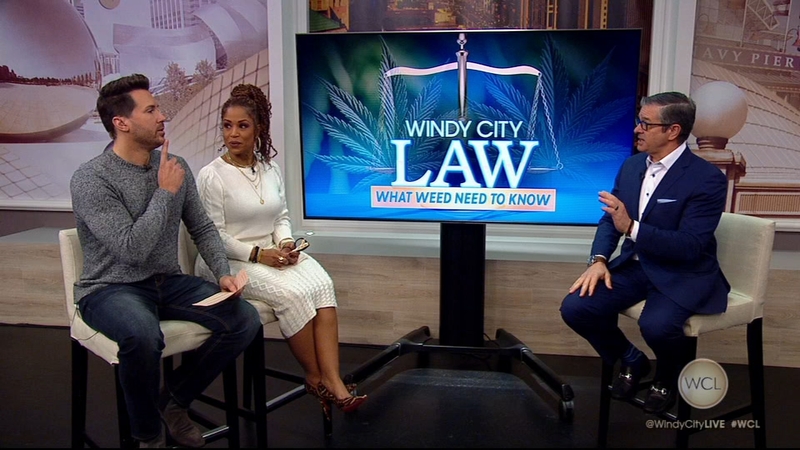 A new year means new laws - most notably, the cannabis act. So, most of us know that recreational marijuana is now legal. But what exactly does that mean, especially in the work place? Lou Cairo, our legal expert and a managing partner at GWC Injury Attorneys - One of Chicago's premier personal injury law firms - was on hand to break it all down.

Ryan: Happy New Year. And with the new year obvious came the new law. So, we know a lot right now, we've seen it all over the news. But what do we still not know that we need to?

Lou: There's a lot that you don't know that you really need to know about this. I mean, everybody knows you've got to be 21 years old, right? Here's the problem: you go to the dispensary, you buy your marijuana, you're transporting it in the car... it's has to be in a child-proof, sealed container that the smell of marijuana cannot emit out of the container. And it has to be out of your reach. So if you put it on the seat next to you, or in your glove box, or in the console and you get stopped by a police officer, you're in violation of criminal law. So you gotta put it in the back seat or put it in the trunk. That's really important. Bet you've never heard of that.

Lou: How about where can you smoke weed? Not on a sidewalk, not in a park, not on the road, not in your car driving, not in the company of anyone who is under 21 years of age, not if you're in the company of a police officer, a firefighter, or an on duty bus driver. There are so many laws about where you can't do it... rather than say where can I smoke, say where can't I. If you rent an apartment or condo, and they have a no smoking policy in the building... you can't smoke.

Lou: Well, it's always a violation of the federal law. If a federal officer stops you and you have cannabis in your possession that you just bought from a dispensary, or even with a medical marijuana card, you have a problem. Now, we don't have a lot of federal marshals walking around in this city so it's not such a big issue. But for state law ... these are all the state laws and you can be 100% legal, but how you are transporting it, where you're smoking it - are big issues.

Val: Okay, now what about work? What are the restrictions there?

Lou: Well, I'm sure no employers have told their people this, but here's the deal: If you work for the federal government, post office, or any federal employee, you can't have it in your possession, can't have it in your system because you're in violation of the criminal law. Let's say you work for a non-federal employer. You work for my law firm, you work for Disney, right... If your employer has a "zero drug tolerance" policy, which means you're not allowed to have drugs period, and they announce that to the workers and they do a random drug testing and you have legal THC in your system... you're gone. They can fire you. And you have no recourse. Because as long as it's an announced, legal, zero drug policy rule...

Ryan: Now, if your employer suspects that you could be high, can they make you take a mandatory drug test? And can you say no?

Lou: If your employer does not have a "zero drug" policy, but they feel that you're impaired, they have the right to ensure that their workers are working safely, so the new law does allow an employer to require that you take a drug test. And if you take the drug test and you fail because you have THC in your system, then you can be terminated. And the problem is, is the ability, the science, the testing and technology hasn't caught up with the law because all they know is that you have THC in your system. Was it from yesterday? Or was it from 30 days ago?

Val: I was just thinking that. What if you did it on the weekend, and then you get a test on a Thursday?

Lou: Right. You can totally, legally do it on the weekend and have done it 30 days ago and if you're a regular user of marijuana - legal marijuana - it will still be in your system and the testing doesn't say, 'Oh, Val has drugs from this morning.' It says she was positive for THC.

Val: Well when you say regular, what do you mean by regular? Asking for a friend...

Ryan: Val has never done it in her life, okay she's asking, really, for a friend.

Ryan: Now how is this going to affect you and other attorneys to represent people if they're maybe if they're injured on the job or if there's an issue at the work place?

Lou: Great question, because the law is you can smoke legally if you work for a non-federal employer... and that's smoke or ingest edibles, brownies, whatever. But if you get hurt on the job, the law in Illinois has been since 2011, that if you have drugs, legal or illegal, or alcohol in your system and you get hurt, there is a presumption that you got hurt because of the drugs or alcohol. And the burden is on the employee, the injured employee, to go get an expert, get a really good lawyer and you prove that the drugs or the alcohol had absolutely nothing to do with why you got hurt. And if you can't prove that, then you get nothing. So it makes it very, very challenging. You know we fight these cases every day at our law firm, we recognize there's going to be a significant increase in these types of problems because of legal marijuana. But we're fighting for every one of our clients until we lose - and we haven't lost any yet.

Val: Wow, okay, now let me ask you this: How will police deal with suspected high drivers? Because right now they can't do a breathalyzer on them...

Lou: Right, DUI laws are going to be the same - if you get stopped by a police officer and the officer feels that you are impaired, whether it's because of a legal drug, an illegal drug, or alcohol, they're going to do a field sobriety test and if they feel you're impaired they're going to make you go back to the station and do a hair follicle test or a blood test. If it comes back positive, you're going to have a problem because you can't prove - with alcohol they say your blood alcohol was .08, you're legally intoxicated. Under .06 the presumption is you're not - with marijuana it's positive or negative.. so you can say, "But, Judge, it was 30 days ago!" The judge will go, "Well, the police officer said you had slurred speech, you were acting funny, you were driving erratically, you answered questions that were wrong, it seems like you were impaired, sir, so you're guilty." And there's no test to prove that you weren't. When the technology catches up with the law, people that are in criminal defense are going to be much better off...

Ryan: Yeah, it's a really muddy situation there.