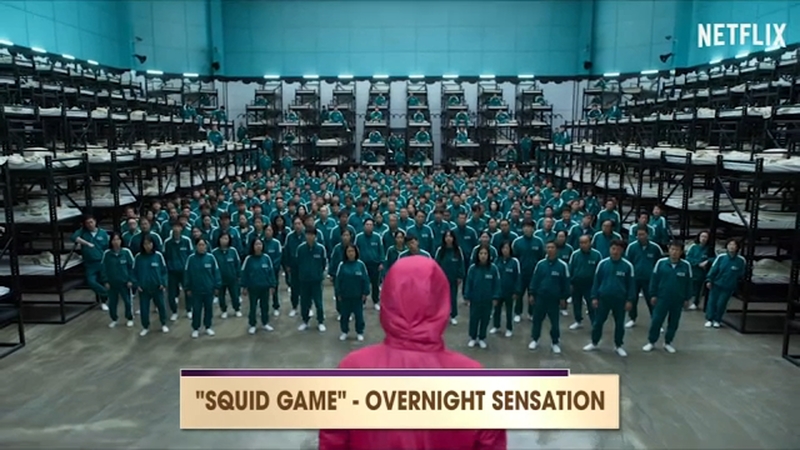 CHICAGO (WLS) -- Val Warner and Ryan Chiaverini break down all you need to know going into the weekend.

This week, Val reminisces about getting engaged on set a year ago Friday. They also dive into the White Sox series and Chicago Sky making it to the WNBA finals.

Ryan and Val also give their take on the Netflix hit show "Squid Game."

In the Kitchen with Alessi

Our home chef, Kenny Beckett, turned his love and passion for cooking into a business! After positive reviews from friends and family, Kenny created Parlay Grill, a popup food and catering company! We sent Kenny to the Strack & Van Til in Crown Point, IN, to shop for his favorite products and ingredients. After picking up some Alessi products, Kenny created a delicious chicken cacciatore meal that's quick and easy to make!

Home chef Kenny Beckett turned his love and passion for cooking into a business!

Deemed "the hunters meal", chicken cacciatore is a rustic dish that has so many variations that when it comes to the core ingredients, you get to imagine yourself as the hunter and truly make the dish what you want it to be. As long as you've got chicken, tomatoes, and a selection of other herbs and vegetables, you can't go wrong!


Pour your can of tomatoes into a blender with 3 tablespoons of garlic puree, a tablespoon each of salt, ground black pepper, and dried oregano and then blend for 20 to 30 seconds. Taste the mixture and add any extra seasoning to your liking if needed. Blend after every addition to really get the flavor to spread throughout the sauce. Once the sauce is to your satisfaction, leave on the side until Step 4.


Heat a large saucepan on medium to medium high heat and coat the cooking area with a light layer of Extra virgin olive oil. Chop or slice your desired vegetable and once the oil is hot(test by placing a piece of vegetable in the grease and see if it sizzles) you can place your vegetable in the pan to saute them. Stir frequently and remove the vegetables once they've all browned and began to soften.

**NOTE** - Depending on the size of your saucepan you may want to saute half of your vegetables at a time. You want these veggies to seer in the oil, not steam.


Season your chicken with garlic salt, pepper, and onion powder. Be generous because any extra flavor will become a part of the flavor of your sauce. After coating your chicken with your seasoning, add more olive oil to the pan as most of it will probably have been absorbed while sauteing the vegetable. Once the oil is hot, add the chicken and seer each side until you see that the chicken has become golden brown. Be sure to move the chicken slightly throughout this process to avoid sticking and burning.


Once your chicken has browned, dump all of your sauteed veggies back into the saucepan on top of and all around the chicken. After you've done that, pour the sauce that you'd blended in Step 1 over the top of the chicken and veggies. Put a lid on the pan, reduce to low heat(until you have a consistent simmer and NOT an aggressive boil) and set a timer for 45 minutes.

.
With your chicken on low simmer, you've now got 45 minutes to prepare your rice. Follow the steps as instructed on the back of your package of Vigo saffron yellow rice in order to cook to perfection.

Once your timer of 45 minutes has gone off, your Chicken Cacciatore is ready to eat! My favorite way to plate this meal is to put my rice in the middle of my plate, spoon some sauce and vegetables over the rice, and then top it with a chicken thigh and more sauce and vegetables. Fish it with some extra capers and fresh basil or parsley.

You can find Alessi products by visiting their website.

Also, be sure to check out Strack & Van Til's website to find a location near you.

To celebrate this historic anniversary, Windy City Weekend's Val Warner headed to Orlando to take in the World's Most Magical Celebration!

To celebrate this historic anniversary, Windy City Weekend's Val Warner headed to Orlando to take in the World's Most Magical Celebration!!

To mark this momentous occasion, Disney unveiled two nighttime spectaculars: Harmonious at EPCOT and Disney Enchantment at The Magic Kingdom.

Guests are also getting their first chance to hop on a new immersive ride that shrinks you down to the size of Chef Remy, the adorable rat with a passion for French food in Disney-Pixar's 'Ratatouille'! Remy's Ratatouille Adventure in EPCOT, packs the sights, sounds and even the smells of Gusteau's kitchen for a true 4-D adventure!

Space 220, also in EPCOT, blasts you off into outer space for high-end 'intergalactic' dining.

Val chats with Disney Imagineers to hear all about coming attractions, like a new immersive two-day resort experience set in a galaxy far, far away!! Its called Star Wars: Galactic Starcruiser.

There's so much new to see and do that the anniversary celebration wouldn't just fit in a year, so you can experience Disney World's Most Magical Celebration for the next 18 months!!

For more information or to book your stay, visit www.Disneyworld.com/50

For your chance to win a 4-day, 3-night Disney vacation from ABC7 Chicago, check out https://woobox.com/db8ebe/

Our film critic Richard Roeper stopped by to share what movies and shows are worth your time and money!

Our film critic Richard Roeper stopped by to share what movies and shows are worth your time and money!

"No Time to Die" - SPEND
After six years and three pandemic-related delays, Daniel Craig is back for his final time as James Bond in "No Time to Die."

"South of Heaven" - SAVE

A convicted felon on parole vows to give his childhood love, diagnosed with cancer, the best year of her life. Jason Sudeikis stars in "South of Heaven."

"Cleanin' Up the Town: Remembering Ghostbusters" - SPEND
A documentary about the making of the comedy classic "Ghostbusters." With behind-the-scenes footage and never-before-seen material, the cast and crew reminisce about the time they spent making the film.

"15 Minutes of Shame" - SPEND
Monica Lewinsky and Max Joseph executive produce this documentary about the world of public shaming in modern day culture.