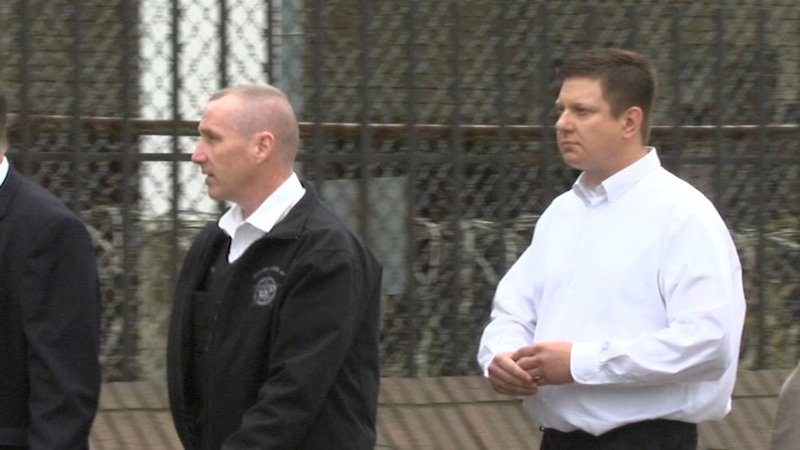 The former Chicago police officer was convicted of second-degree murder and sentenced to 81 months, or six years and nine months, in prison for shooting and killing Laquan McDonald in 2014. But he will have served less than half that when he is released.

Video of the shooting from a police dashboard camera, released more than a year later, was a key piece of evidence in the trial and inflamed public reaction across the country.

His release is not considered special treatment but is based on state rules that allow anyone to be released after about half their time with good behavior.

Law enforcement officials told the I-Team he was flown into Illinois last Friday from a facility not under state control, perhaps another state or a federal lockup. He was released from Taylorville Correctional Center near Springfield at 12:15 a.m. Thursday, an IDOC spokesperson said.

Van Dyke does have to report to state probation. He also can't leave the state during his three-year supervised release period.

There is still the unanswered question of whether the US Justice Department will now charge Van Dyke with violating Laquan McDonald's civil rights.There has been a federal; investigation underway but so far no charges-and no indication of imminent charges from the DOJ.

The ABC7 I-Team has learned that top security officials in Chicago even met with downtown business officials to discuss security concerns in the event of any civil disturbances.

9 arrested at protest in Federal Plaza

Nine people were arrested at a protest against Jason Van Dyke's early prison release Thursday. They were all released from custody by Thursday night.

Several community groups and activists were joined by dozens of people to protest at Federal Plaza. They want to see Van Dyke back behind bars.

"He's going to jail," said community organizer William Calloway. "Y'all got to have that faith."

Calloway spearheaded the years-long charge that led to Van Dyke's conviction, the first in 50 years of a Chicago police officer for killing someone while on the job.

Nine people were arrested inside the Dirksen Federal Building for violating the chief judge's order for demonstrations and appeared in court Thursday night, a spokesman for the U.S. Marshals said. They had all been released by shortly after 8 p.m.

The groups included Reverend Jesse Jackson and The Rainbow PUSH Coalition, Father Pfleger from Saint Sabina Church, Black Lives Matter Chicago and others. Many people including politicians are calling for the Department of Justice to file federal civil rights charges against Van Dyke.

"When George Floyd was killed, his killer was tried, the state tried it and now it's back in federal court," said Rev. Jesse Jackson, Sr. "The state did not do its job here. The crime and time does not correspond."

Protesters tried to deliver a letter to U.S. Attorney John Lausch demanding federal civil rights charges be brought against Van Dyke. They were unable to meet with Lausch and met an executive aide instead.

Asked if Van Dyke could face federal charges, ABC7 Legal Analyst Gil Soffer said, "Double jeopardy doesn't attach when you have the federal government trying to prosecute something that the state already prosecuted.

Foxx said Tuesday that "if there's an ability to do something about it on the federal level then by all means something should be done."

Mayor Lori Lightfoot also issued a statement Thursday morning saying, ""I know some Chicagoans remain disheartened and angry about Jason Van Dyke's sentence for the murder of Laquan McDonald. As I said at the time, while the jury reached the correct guilty verdict, the judge's decision to sentence Van Dyke to only 81 months was and remains a supreme disappointment. I understand why this continues to feel like a miscarriage of justice, especially when many Black and brown men get sentenced to so much more prison time for having committed far lesser crimes. It's these distortions in the criminal justice system, historically, that have made it so hard to build trust.

"While I know this moment is disappointing, it should not prevent us from seeing the significant progress Van Dyke's prosecution and conviction represent. He was the first officer in more than half a century to be convicted of a crime committed purportedly in the line of duty. This prosecution led to historic reforms, including comprehensive legislation that created the first-ever community police oversight body in Chicago, and a consent decree to oversee CPD reform. There is much more work to do, and it is by doing that work that we can heal from this and move forward towards justice and accountability every day."
Report a correction or typo
Related topics:
chicagolooppolice involved shootingpolice shootingjason van dykecivil rightsi teamlaquan mcdonaldprisonchicago police department
Copyright © 2022 WLS-TV. All Rights Reserved.
I-TEAM
Wedding guest budgeting tips
Postal police say they are sidelined during time of heightened crime
ISP combating expressway shootings with new technology, tactics
IN man pleads guilty to being in US Capitol during Jan 6 insurrection
TOP STORIES
2nd man killed in Near North Side McDonald's mass shooting ID'd
White Sox star says Yankees slugger made racist remark, benches clear
Police investigating potential abduction on Far South Side
Residents mourn loss of resort as firefighters continue battling blaze
Wisconsin couple kills bear that attacked them in their home
Man shot, killed 'without provocation' on NYC subway: police
Beloved Old St. Pat's pastor, Fr. Hurley, returns to say farewell
Show More
Noah Thompson crowned as the next 'American Idol' in season finale
ABC7 presents 'Our Chicago: Asian Voices'
A new billionaire has been minted nearly every day during the pandemic
Texas woman sought in fatal shooting of pro cyclist: US Marshals
Man caught on camera pushing 26-weeks-pregnant woman to ground
More TOP STORIES News