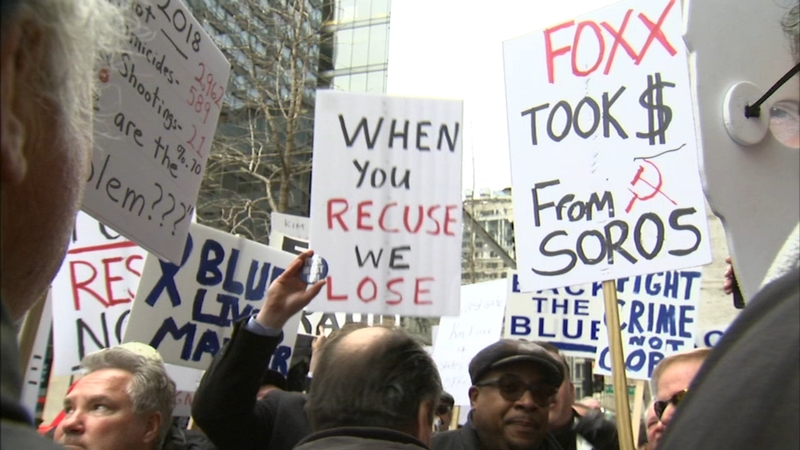 Jussie Smollett case leads to protests for, against Kim Foxx

One group wants Cook County State's Attorney Kim Foxx out of a job, based on how her office handled the Smollett case. The other supports her.

Jackson said he stands by Foxx and her decision to dismiss the charges, calling the attacks against Foxx "unreasonable, unjustified and politically motivated." Jackson said Foxx did the legal and right thing in recusing herself from the case.

In a Chicago Tribune op-ed, Cook County State's Attorney Kim Foxx said that her office did not have enough evidence to convict Jussie Smollett, despite what she earlier told ABC7.

Jackson calls the outrage over Smollett misplaced and out of proportion, and claimed first-time offenders in Cook County often have their class 4 felony cases dismissed.

"The attack on Kim Foxx is not about Jussie. Rather, it's an excuse to try to remove a strong black woman who comes in the office of state's attorney to reform it," Pfleger said.

The group supporting Kim Foxx called for an apology from Chicago Mayor Rahm Emanuel over the Laquan McDonald killing, saying he should have had as much passion about that case as he does over the Smollett case. McDonald was a 17-year-old black teen who was shot 16 times by Chicago Police Officer Jason Van Dyke in 2014.

The rally led by Jackson, and another held by groups including Black Lives Matter outside the Cook County Office Building, were organized in reaction to one planned by the Fraternal Order of Police.

Representatives of Chicago's police union said Monday that Foxx must go, and that dropping the charges was wrong. They said they believe the actor staged a hoax and owes the city money for the high-profile investigation.

"We extended a lot of manpower and we've done a lot of work to make sure that this case was brought to trial, and it wasn't. These police officers, I believe it cost us $130,000 in overtime? That's a lot of money to just throw away," said Kevin Graham, FOP president.

Smollett's attorney Mark Geragos said it was prosecutors who proposed a deal to drop the charges and do away with the case against Smollett.

"So all I know is, they approached us about dismissing it, and not the other way around," Geragos said.

Foxx stands by the decision to drop the 16 count indictment against the "Empire" actor saying she was not certain she could get a conviction.

She recused herself from the case early in the investigation. The dismissal of charges against Smollett has divided the prosecutor's office and city officials.

Emanuel has publicly stated that he believes the actor staged a hoax and owes the city money for the high-profile investigation.

"Our job is to present them with the evidence. Their job is to prosecute it the way they deem appropriate. We don't always agree, but that's the judicial system that we have and I honor that," Johnson said.

Johnson said he and Foxx talk all the time.

"Our relationship is kind of like a marriage," he said. "We have the same goal, but we don't always agree."