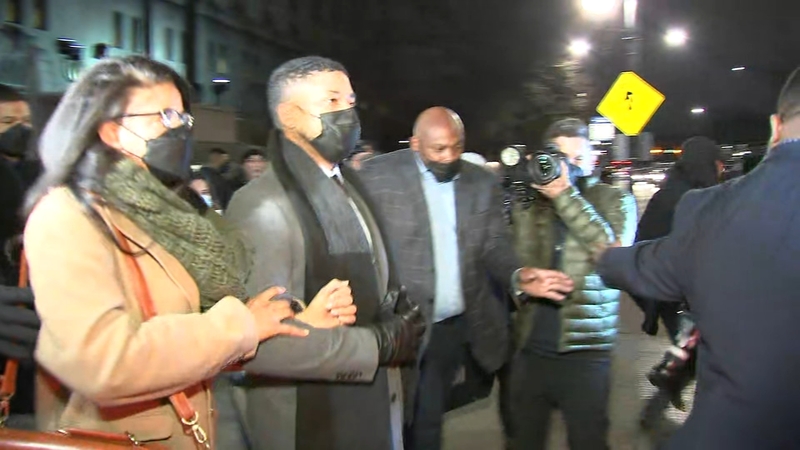 CHICAGO (WLS) -- The jury in the Jussie Smollett case has found him guilty of five counts of disorderly conduct for staging a racist, homophobic attack against himself in Streeterville in 2019.

Smollett raced out of the courthouse, ignoring questions from a crush of media after the jury's stunning rebuke.

The former "Empire" actor showed no emotion as the verdicts were read. He faced six counts of felony disorderly conduct for lying to police about the attack and was found guilty on all of them but the sixth count, which was to do with changing his statement given to Det. Robert Graves on Feb. 14, 2019, from a "white attacker" to "pale-skinned."

Jussie Smollett walks into court to hear the jury's verdict in his case.

Judge James Linn said he was fine with keeping Smollett on his recognizance bond, but he will have to return to Chicago for sentencing. He faces between one and three years in prison, but since he has no criminal record experts say it's possible he will get probation.

RELATED: Here's what could happen during Jussie Smollett's sentencing

Post-trial motions will be held via Zoom on January 27, but no sentencing date has yet been set.

Special prosecutor Dan Webb excoriated Smollett in a press conference after the verdict came down for reporting a false hate crime, noting that Chicago police officers worked around the clock as they took his claims very seriously.

"Not only did Mr. Smollett lie to the police and wreak havoc here in this city for weeks on end for no reason whatsoever, but then he compounded the problem by lying under oath to a jury," Webb said.

He also said by staging and then reporting a fake hate crime, Smollett did damage to the credibility of other victims of hate crimes.

Special prosecutor Dan Webb ripped into actor Jussie Smollett after he was found guilty of lying to police about a racist, homophobic attack.

The judge thanked the jury, which was comprised of seven men, including one African American man, and five women.

The defense vowed to appeal the verdict.

Jussie Smollett's defense attorney Nenye Uche said his client is "100% innocent" and is confident they will overturn his conviction on appeal.

Ola Osundairo, one of the two brothers hired by Smollett to stage the attack against him, had no comment on the verdict but did take a sqipe at reporters, who had referred to the Chicago-born brothers as being Nigerian.

"I apologize if I'm not using my Nigerian accent tonight," he said.

Brother Bola was in Shreveport, Louisiana, at the time of the verdict, where he is competing in the USA Boxing Tournament. His attorney said he won a bout Wednesday night and is fighting again Thursday evening, despite the trial disrupting his training schedule.

The Chicago Police Department did not have a comment on the verdict, but former CPD Supt. Eddie Johnson, who was superintendent when the hoax attack happened, was somewhat rueful after the news broke.

The case struck him as odd from the start.

"Let's face it. You look at that video, that news. I will say this, there's no Black man in America that would have a noose put around their neck and leave it on," Johnson said. "They just won't do that. That first thing they're going to do is take it off."

Eddie Johnson was Chicago police superintendent when Jussie Smollett reported a racist, homophobic attack against him, and said he knew something was wrong almost immediately.

At the time, nearly two dozen investigators spent days trying to verify Smollett's claims while violent crime was raging across the city.

"We didn't lay down on other things, but we wanted to give him his due diligence, of course," recalled Johnson. "But it was pressure on me in terms of, just if the, if the evidence guided us in a way where it was a hate crime then OK, but it didn't. And so it became pressurized for me at that point, because we had to clear the serious crimes."

Just two weeks after a grand jury returned a 16-count indictment against Smollett for lying to police, the officer of Cook County State's Attorney Kim Foxx, who had recused herself from the case, dropped every one of those charges.

"Of course it caught me and the mayor off guard when they dropped the charges," Johnson said.

The city's Law Department released a statement after the verdicts were read, saying, "The City filed a civil lawsuit against Jussie Smollett to recover costs incurred by the Chicago Police Department investigating what the City believed to be Smollett's false police reports that he was a victim of a hate crime. While using a different standard of proof, the jury's finding of guilt convicting Jussie Smollett of criminal charges stemming from the incident confirms that the City was correct in bringing its civil lawsuit. The City intends to continue to pursue its lawsuit to hold Smollett accountable for his unlawful actions and to demand that he compensate the City for costs incurred by the Chicago Police Department which took his false claims of harm seriously."

Both prosecution and defense gave their closing arguments Wednesday morning. The jury got the case shortly before 2:45 p.m. One juror had a prior commitment and had to leave by 5:15, and shortly after 5 p.m. the judge dismissed jurors for the day, ending their first day of deliberations without reaching a verdict. On Thursday, they resumed their deliberating about 9:15 a.m. at the Leighton Criminal Courthouse and announced they had reached a verdict around 4:30 p.m.

READ MORE: What is Jussie Smollett charged with?

Jurors did have a question Wednesday night, requesting a calendar the special prosecutor used during the trial.

Webb wove together seven days of testimony and evidence, including statements from Chicago police officers, the Osundairo brothers and Smollett in his closing argument, appealing to the jury's "common sense and intelligence."

A legal expert joined ABC7 Chicago Tuesday to weigh in on Jussie Smollett's decision to testify in his own defense.

"In January 2019, Mr. Smollett developed this plan to create a fake hate crime, then reported it as a real crime to the Chicago Police Department," Webb said.

He told the jury Smollett is not credible and said he was "tailoring his testimony" and lying under oath. He detailed places where he argued Smollett changed his story, and emphasized Smollett's reluctance to participate in the CPD investigation.

Webb argued Smollett refused to give police his phone because he had messaged Bola Osundairo.

Webb even went so far as to call part of Smollett's story "ridiculous," asking why Smollett was at the intersection at 2 a.m. He told the jury he went to get eggs because Osundairo told him to eat more eggs. But the drug store Smollett said he went to was closed.

"How would the brothers know to be right at that intersection right at 2 a.m.?" asked Webb. "Smollett told them where he was going to be."

And Webb said Smollett manipulated the rope that Ola Osundairo testified he couldn't get around the actor's neck.

During the defense's closing arguments, Smollett's attorney Nenye Uche described the case as crazy and Smollett as innocent and called the Osundairo brothers "con man" "liars" "criminals" who wanted money from the actor.

"They are trying to twist his (Smollett's) words. Jussie was injured! Those were real injuries!" Uche said. "These guys want to make money. They want the fast life. They want it easy."

The defense said in January 2019 Smollett's star was on the rise.

"Not only does Jussie have a lack of motive, he has anti-motive." said Uche. "He's dumb enough to go into Obama's city and pretend there's Trump supporters with MAGA hats running around? Gimme a break."

Smollett's defense ended with an appeal.

A legal analyst weighed in on a possible verdict in the Jussie Smollett trial Wednesday.

"I need constitutional warriors in that jury room." he said. "I ask you, please be strong."

The actor's defense attorneys have insisted Smollett is a real victim in the Streeterville attack.