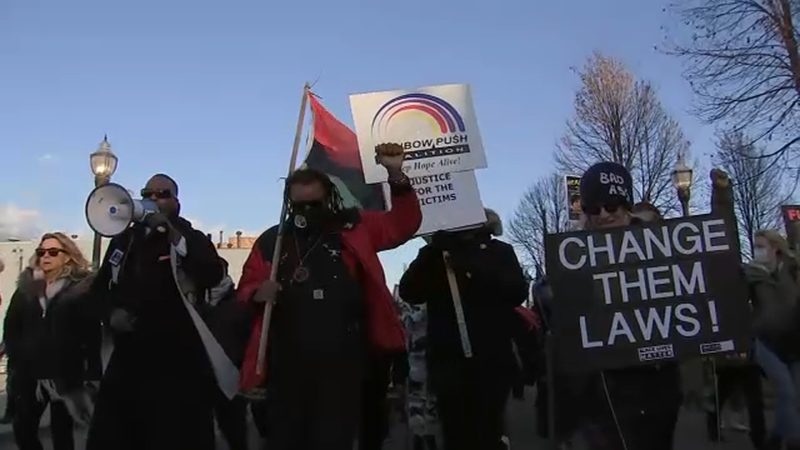 CHICAGO (WLS) -- More protests have been planned for Sunday in reaction to a jury's acquittal of Kyle Rittenhouse on all charges.

Dozens joined Justin Blake, the uncle of Jacob Blake, Sunday in Kenosha, Wisconsin to call for justice after the Antioch teen was acquitted last week.

Jacob Blake is a Black man who was shot seven times by a white Kenosha police officer last summer, which sparked demonstrations that drew the then 17-year-old Rittenhouse to the Wisconsin community.

There were several peaceful demonstrations in Chicago and around the nation following the jury's decision that the Antioch teen acted in self-defense when he shot three men, killing two of them, in the summer of 2020 in Kenosha, Wisconsin.

The Rainbow Push Coalition was among the groups who joined a protest at the Federal Plaza downtown as hundreds of people marched through the Loop.

Some of the demonstrators said the decision to free Rittenhouse is a miscarriage of justice.

Rev. Jesse Jackson also offered his thoughts on the verdict, calling it a "major blow against justice and open season by the violence of right-wing military."

Ahead of the rally, the civil rights leader emphasized that just one juror was a person of color.

Rev. Jesse Jackson spoke on the Kyle Rittenhouse verdict, calling it a "miscarriage of justice."

After speeches, the group moved through the Loop calling for justice and taking swipes at both President Joe Biden and former President Donald Trump. Some signs equated the verdict and the justice system with racism.

One man said he doesn't necessarily believe Kyle Rittenhouse intended to champion white supremacy on that infamous violent night, but he still sees the aftermath as supporting that group.

"It's just the fact that he's not held accountable for things that other people are punished for, for doing things way less," said demonstrator Dominic O'Connor.

Meanwhile, the families of those shot and killed by Rittenhouse have been speaking out.

RELATED | Kyle Rittenhouse shooting victim's father responds to verdict: 'We relived his death all over again'

Both Rittenhouse and his attorneys said the verdict was a victory for self-defense and the right to protect oneself.