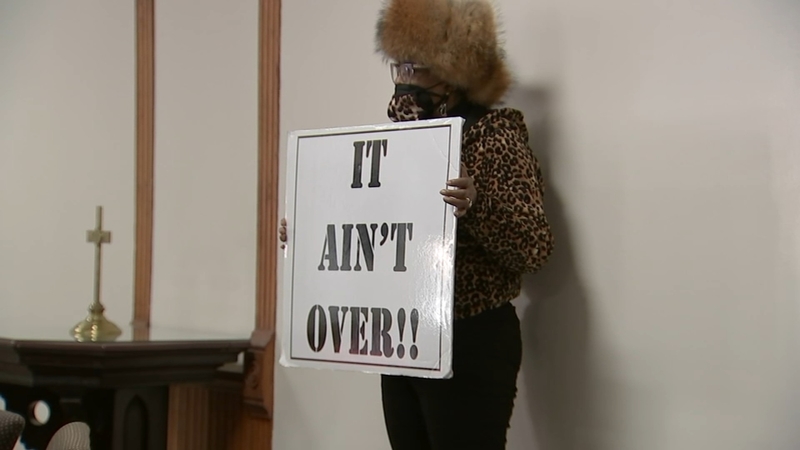 CHICAGO (WLS) -- With tears in their eyes and arms linked together, community organizers vowed Friday their fight for Laquan McDonald continues on.

Van Dyke was convicted of second degree murder for killing McDonald. He was released from prison Thursday after serving less than half of his sentence.

"We need federal charges so that other officers understand if you are like Jason Van Dyke, you will be prosecuted on the state level and on a federal level," Green said.

The Laquan 9 said their arrests are considered civil disobedience, and they plan to follow blueprints already in place from civil rights leaders.
"We did want to participate in civil disobedience. We want that to be adamantly clear," said William Calloway, a community organizer.

Kina Collins, a community organizer running for the 7th U.S. Congressional District seat, added that this moment in time is critical.

"We are literally in another civil rights movement right now as we speak," Collins said.

The Laquan 9 held their news conference at Quinn Chapel AME, home of Chicago's first African-American congregation. Dr. Martin Luther King Jr. once spoke at the church, and the organizers tapped into history.

"In the words of Dr. Martin Luther King, 'Justice too long delayed, is justice denied.' And we want justice for Laquan McDonald," said Amber Leaks.

Those arrested included a grandmother and mothers thinking of their own children.

"I want to let them know I was out here standing up for justice," said Nataki Rhodes.

Now the community organizers are asking everyone from President Biden and Vice President Kamala Harris, to local residents to get involved, including pastors.

"All these pastors in the city of Chicago we are asking you to joins us, help us mobilize, help us activate," Calloway said.

For now, their struggle will continue. They are planning more acts of civil disobedience. All nine are expected in federal court Tuesday.