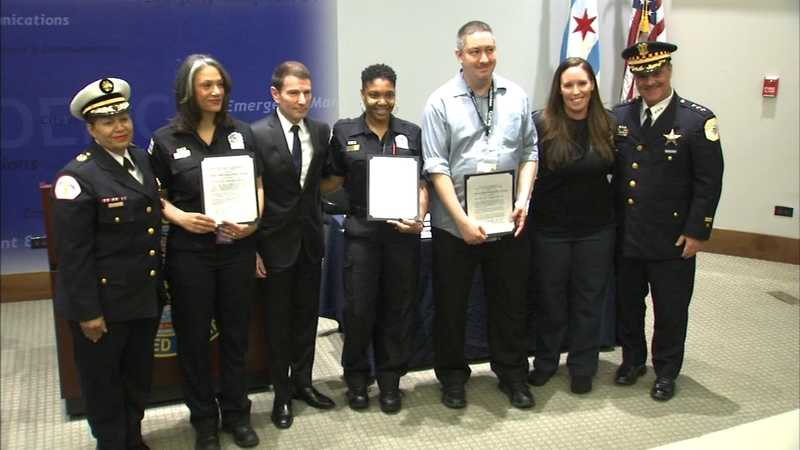 CHICAGO (WLS) -- In the chaotic moments before and after last year's Mercy Hospital shooting, those working the phones at the Office of Emergency Management and Communications was one group who brought clarity.

"The original call came over as a person with a gun," said Police Communications Operator Bianca Smith.

Smith was the dispatcher that first deployed officers to the scene that would ultimately end in tragedy with four people dead, including one Chicago Police Officer.

As that was going on, Police Communications Operator Theia Brown was taking a different call, a 911 call from Doctor Tamara O'Neal.

"All I knew to do was to talk to her and get as much information from her as possible and find out what was happening," Brown said.

Brown stayed on the phone with Dr. O'Neal from beginning until the end.

Thursday Brown and Smith were two of many people on their team honored for their work on that day.

"I think I woke up the day after, two days after and the fact that I was the last person she talked to really, really struck me hard," Brown said.

Now those in the Office of Emergency Management and Communication lean on each other for support.

"My entire watch, we all became one zone. Everyone was helping," Smith said.

Fellow teammate Jason Martinez said he and his team kept their cool because they say anything other than that would be a disservice to their city.

"If you hear the voice on the radio losing it, it's not going to communicate what they need to help," Martinez said.