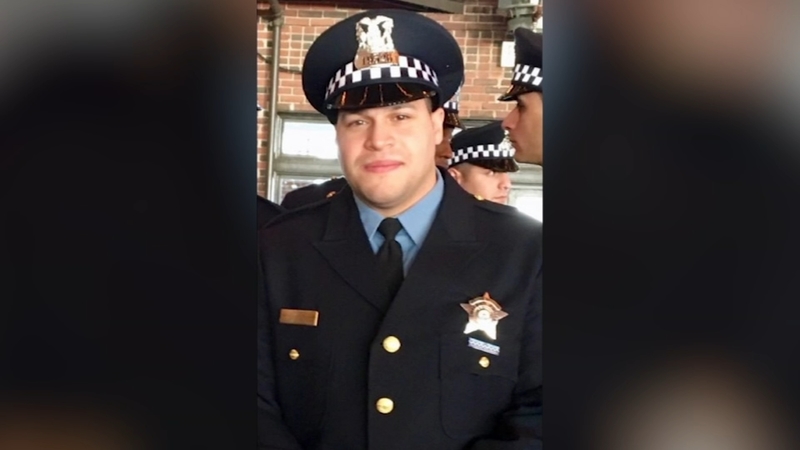 CHICAGO (WLS) -- The funeral for Chicago police Officer Samuel Jimenez, who was killed in the Mercy Hospital shooting, will be held Monday, CPD announced.

The funeral Mass will be held 11 a.m. Monday at Chapel of St. Joseph at Shrine of Our Lady of Guadalupe, 1170 N. River Rd., Des Plaines. A private burial service will be held at Ridgewood Memorial Park in Des Plaines.

Funeral arrangements for fallen #ChicagoPolice officer Sam Jimenez are being worked on and will be posted as soon as they are finalized. For external agency travel planning purposes, we are aiming for Sunday visitation with a full honors funeral on Monday 11/27. Details to follow pic.twitter.com/FL0DrTkh1J

Officer Jimenez's family is still processing what happened even as they make arrangements for his funeral. The 28-year-old who was there for so many was there for his family first, they said.

"My brother, he was the rock of the family. We're all broken right now but I know Sam will want us to be strong," said Jimenez's brother, Rafael Lugo.

Samuel Jimenez was the youngest of his siblings. Though he may have been the baby, his older brother said he was the strongest. And while the family worried about Jimenez as a police officer, they said they supported his dream.

"I would always call him. I would bless him 20 million times and tell him to take care of himself because his job was very difficult," she said.

"He went out as a hero," Lugo said. "I loved my brother. He did what he always wanted to do. He saved a lot of lives, too."

Lugo recalled a happier day, when he served as best man at Jimenez's wedding to his high school sweetheart.

"We have a tight bond, you know? My little brother, but I look up to him as my big brother," Lugo said.

Rivera has been comforted by the recognition her slain son has received.

"They have put my son on a pedestal. My son is now a bright star for the whole world, not just for his police station," she said. "His sergeant told me he is a hero and was a hero. He gave his life to defend the life of others. I'm very proud of my son."

Rivera and Lugo thanked those who have shared kind thoughts about Samuel over the last two days and said they are grateful for all the support they have received.

Earlier Wednesday, the Chicago Police Memorial Foundation presented his loved ones with a check to help with expenses. The 100 Club of Chicago is also pitching in.

"It's on behalf of all of the Chicago police officers and all of the contributors to the Chicago Police Memorial Foundation and it's helping the families out, that's the important thing here," said Chicago Police Memorial Foundation Executive Director Phil Cline. "That's what we want these families to know is that that don't have to go forward alone. We will always be there for them."

Tuesday night, the Edison Park community came together at the Firewater Saloon to hold a fundraiser for Jimenez' wife and three children. Officer Samuel Jimenez grew up in the area and his family is from there and friends and former colleagues were there in support.

Meanwhile, blue ribbons wrapped around fences and poles will guide the way for thousands of runners through the neighborhood in an annual fundraiser on Thursday for the Police Memorial Fund.
"Had he not made that ultimate sacrifice, there would have been so many more people that may have been killed," said Melissa McIntyre of the Edison Park Chamber of Commerce.

"When everyone's running away from gunfire, that's Sam running towards it to help somebody that's screaming and crying for help," said Anthony Jahs, Jimenez' police academy classmate. "That's just who Sam is."

Jimenez was killed in an exchange of gunfire on Monday afternoon at Mercy Hospital. He was trying to stop a man in a rage from killing more people.

The 28-year old-who just became a full-fledged police officer is being hailed as a hero.

Before he was Officer Jimenez, people in Edison Park knew him as a working boy with a dream. Jimenez was a student-athlete and choir member at Foreman High School, now known as Foreman College and Career Academy, in Chicago's Portage Park neighborhood. He graduated in 2009. The school is set to honor Jimenez on Saturday, according to the Chicago Sun Times.


Years ago, Jimenez worked at Moretti's restaurant in the Edison Park neighborhood.

On the eve of what may be a painful Thanksgiving for the victims' families, a small crowd gathered to bring light to what ended the lives of Officer Jimenez, Dr. Tamara O'Neal and pharmacy resident Dayna Less.

"These are really good people," said Margaret Sents, another attendee of Wednesday's vigil. "Surely we should value them enough to protect them with sensible gun legislation."