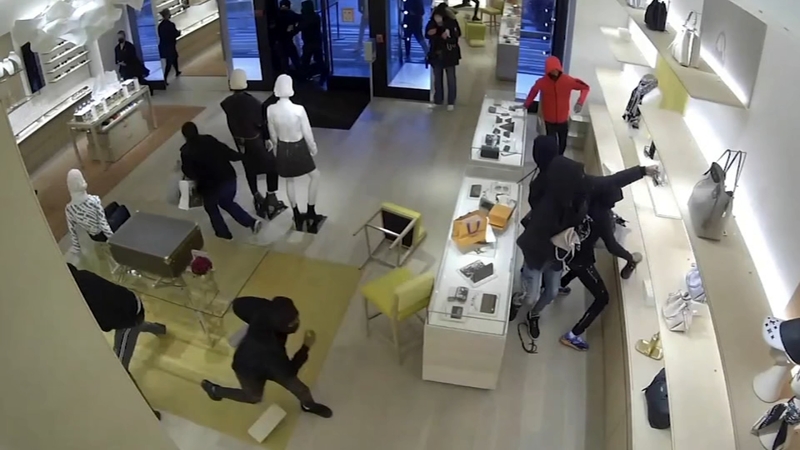 The Oak Brook Police Department responded to a report from mall security at about 3:31 p.m. of several people partaking in a grab-and-run of merchandise at 196 Oak Brook Center.

"Once they entered the store, they pulled out the garbage bags from their coats and started filling them with merchandise," Oak Brook Police Chief James Kruger said.

Fourteen suspects drove away from the scene in three separate vehicles. Police recovered one of the vehicles, a Dodge Charger reported stolen in October out of Chicago. The recovered vehicle will be processed later Friday, police said. Investigators said they are following leads, including license plates numbers for the criminals' getaway cars.

"This is safe area," shopper Mahboob Abbas said. "We come here all the time. The kids play outside."

"You don't expect that kind of thing to happen outside of the city, too," shopper Jasmine Tsang said. "I actually moved in from the city just recently. I thought I escaped all of that."

This isn't the only Louis Vuitton store that's been targeted. A similar crime happened last month about 30 miles from here in the northern suburbs."=

In that case, Northbrook police said 13 thieves and 3 getaway drivers targeted a store at Northbrook Court Mall, stealing $66,000 dollars worth of merchandise.

"We don't know if there is a connection yet, but certainly there are similarities and our investigators are talking to their investigators," Kruger said.

Police in Oak Brook are now turning to the Illinois attorney general, who has formed a task force for these types of crimes.

"The attorney general is looking into this investigation as well and whether or not to tie it to a larger scale investigation," Kruger said.

Authorities urge anyone who may have seen something suspicious or has information to contact the Oak Brook Police Department at 630-368-8700 or email crimetips@oak-brook.org.