Early voting numbers at a record high ahead of runoff

WLS
CHICAGO (WLS) -- A record number of Chicago voters have made up their minds and cast ballots before Election Day during early voting.

Mayoral candidate Jesus "Chuy" Garcia and wife Evelyn walked into their 22nd Ward polling place a few minutes past 9 a.m. After checking in, they finished their business in fewer than two minutes.

"I urge everyone who's out there to come out and early vote," Garcia said. "It's convenient, it's fast and get it done."

At the same time, Mayor Rahm Emanuel walked alone into the polling place at the city's Board of Elections headquarters to count himself among the record number of early voters.

"The early vote, as you said, is big," Emanuel said. "I think people realize that this is a big election."

As of Wednesday night, over 100,000 Chicagoans had early voted in the runoff; that's nearly twice the number who had cast ballots at the same point before the February election when overall turnout was 34 percent.

A Board of Election spokesman predicted a higher overall turnout next Tuesday during spring break for the public schools.

So far, the five wards with the highest early vote are the 41st, 45th and 47th on the North and Northwest Sides, and the 18th and 19th on the South Side.

The wards with the lowest early vote are the 12th, 15th, 25th, 26th and 30th. All are considered Latino majority wards.

Commissioner Garcia, whose campaign wants to win by big margins in those wards, said it is tradition among many in his community to vote after work on Election Day.

"I do expect a much better turnout, a much heavier turnout on Election Day," Garcia said. "I predict there will be lines, especially between the hours of 3-7 p.m."

The Election Board also reports that absentee or mail-in ballots are arriving at a record pace as already 55,000 have been received. They'll be counted after the polls close on April 7. 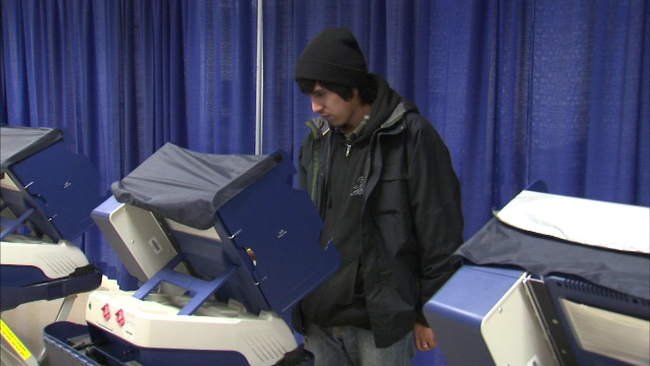