In a surprise announcement from his studio window to faithful standing below in St. Peter's Square, Francis said the churchmen would be elevated to a cardinal's rank in a ceremony on Nov. 28.

Gregory was picked by Francis to lead the prestigious diocese in the U.S. capital last year. He served three times as the head of the U.S. Conference of Bishops.

"By naming Archbishop Wilton Gregory as a Cardinal, Pope Francis is sending a powerful message of hope and inclusion to the Church in the United States," Archbishop José H. Gomez of Los Angeles said. Gomez is also the current president of the U.S. Conference of Catholic Bishops. "As a former president of our national bishops' conference, Archbishop Gregory displayed generous and principled leadership. The naming of the first African American cardinal from the United States gives us an opportunity to pause and offer thanks for the many gifts African American Catholics have given the Church. Please join me in praying for the continued ministry of Archbishop Gregory."

Other priests congratulated him during Sunday mass at Holy Angels Catholic Church in Avenue, Maryland.

"We are grateful to Pope Francis for his appointment today of Archbishop Wilton D. Gregory as Cardinal of the Catholic Church," said Cardinal Blase J. Cupich, archbishop of Chicago. "While we take particular pride in this recognition of a dedicated priest, whom we are proud to claim as our own we are also moved that Pope Francis chose this compassionate, thoughtful pastor when our nation and the world are in desperate need of healing and courageous leadership."

Gregory came to the Catholic faith as a student in a Chicago archdiocese grammar school and went on to become a strong leader in addressing some of the most pressing issues facing the church and society, Cupich said. In his years as president of the United States Conference of Bishops and beyond, he has been at the forefront of moving the church to repair the damage of child sexual abuse and confronting racism in all its forms, he added.

Gregory, whose parents were Baptist, converted as a child to Catholicism.

His elevation to cardinal is seen as groundbreaking and shines a long-overdue spotlight on African American Catholics.

"The fact that we now have an African American cardinal is a tremendous blessing," said Father Jerry Boland, pastor of Our Lady of Perpetual Help.

"I think that's what his ministry has been a celebration of humanity and difference," Gregory's sister added.

Gregory's first assignment was at the Glenview church.

For the past 50 years, Sister Rosemary Connelly has developed the residential and program offerings of Misercordia, a local nonprofit that offers care to people with disabilities.

"If there is anyone that deserves to be a cardinal, it is Wilton Gregory," Boland said. "He has served the American church in so many ways."

Boland worked closely with Gregory at Our Lady of Perpetual Help.

He's the third Chicago priest to become a cardinal.

This weekend, some of those who know Gregory and his faith from his roots in Chicago are rejoicing in the decision.

"It's not just about him. It's about the combination of help and joy and support and love and giving that has allowed him to accomplish this," Swenson said. "And, Pope Francis recognizing who we are and what he is, and can offer and has been offering to the church."

Tim Thoelecke has been part of the Glenview church since 1964.

He shared a dear memory of Gregory from an Easter, decades ago. Thoelecke said his wife was sick and could not make it to church, so Gregory came to their home and gave her communion.

"People liked him because he was such a kind person, likable, handsome man. Now he has that gray hair like I do, but he worked for it like I did," Thoelecke said.

Gregory grew up on the South Side of Chicago, just about five minutes away from St. Sabina church.

"We were friends all through high school and college and the seminary," said Father Michael Pfleger of St. Sabina.

He added the two are still close today, and he applauded the pope's decision.

"This pope has made major changes in the church, and this is another great move for the church," Pleger said.

He said he was confident Gregory, who has served as a voice for the disenfranchised, will continue to be the voice of change.

"I think this will allow him to be an even more powerful voice in this country for justice," Pfleger said.

Other new cardinals include an Italian who is the long-time papal preacher at the Vatican, the Rev. Raniero Cantalamessa, a Franciscan friar; the Kigali, Rwanda, Archbishop Antoine Kambanda; the Capiz, Philippines, Archbishop Jose Feurte Advincula, and the Santiago, Chile, Archbishop Celestino Aos.

Another Franciscan who was tapped is Friar Mauro Gambetti, in charge of the Sacred Convent in Assisi. The pope, when elected in 2013, chose St. Francis of Assisi as his namesake saint, and earlier this month, the pontiff journeyed to that hill town in Umbria to sign an encyclical, or important church teaching document, about brotherhood.

In a reflection of the pope's stress on helping those in need, especially the poor, Francis also named the former director of the Rome Catholic charity, Caritas, the Rev. Enrico Feroci, to be a cardinal.

New cardinals under the age of 80 will join fellow cardinals eligible to elect the next pontiff in a secret conclave.

No details were immediately given by the Vatican about the consistory, as the formal ceremony to make the churchmen cardinals are known, especially given travel restrictions involving many countries during the COVID-19 pandemic. 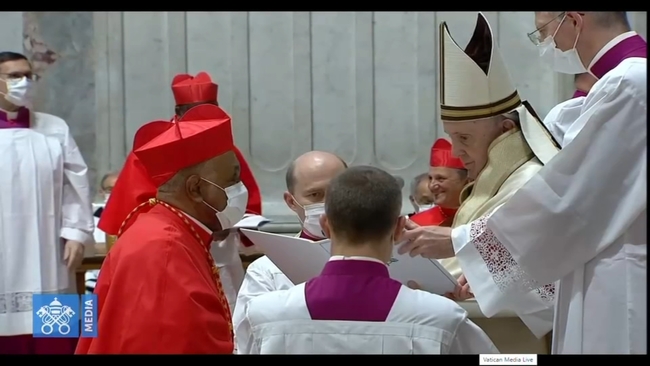