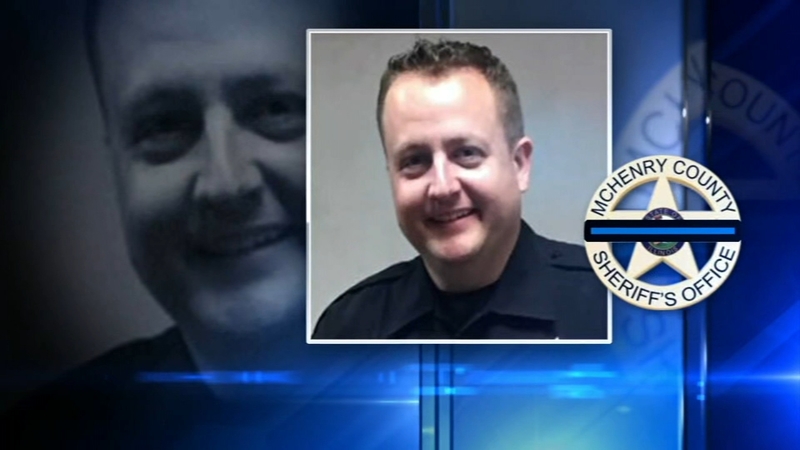 ROCKFORD, Ill. (WLS) -- The widow of McHenry County Deputy Jacob Keltner, who was shot and killed while assisting in the arrest of a fugitive Thursday, released a letter to the public on the eve of her late husband's funeral.

Deputy Keltner was assisting a U.S. Marshals Fugitive Task Force who were searching for 39-year-old Floyd Brown who was wanted on a number of warrants in multiple counties.

Police tracked Brown down to a Rockford hotel. When investigators knocked on the door, he fired shots at police then jumped from a third story window and shot Deputy Keltner in the head with a rifle, authorities said. Keltner was rushed to a local hospital where he was pronounced dead.

Brown was taken into custody Thursday afternoon following a high-speed chase and standoff with police.

Those who knew Keltner remembered him as a determined, motivated man.

"Never quit, never gave in," said Andy Isaacson, gymnastics coach at Willowbrook High School. "It didn't come easy for him to do any of the skills that he did, and he worked very hard."

Isaacson said that while others had more talent, no one outworked Keltner, who graduated in 2001. After hours in the gym he practiced at home on a pommel horse installed in his family's garage.

"Everybody got better by watching Jake persevere," Isaacson said.

"Our school kind of has a motto: one school, one family. And Jake was a family member of ours, so we lost a family member," said Brandon Murphy, Willowbrook High School Athletic Director.

"He wanted to make the world a better place and he did make it a better place for my family," Becki Keltner wrote in her letter. "He was my rock. He supported me through thick and thin. He was my everything and we didn't have enough time..."

You can read the Becki's full letter below.

Hundreds of people are expected to show up to pay their respects to Keltner.

The funeral will take place on Wednesday, March 13 at Woodstock North High School, 3000 Raffel Road in Woodstock. The funeral begins at 10:00 a.m. Classes have been canceled for the day for the funeral.

FULL TEXT OF THE LETTER FROM BECKI KELTNER
A letter from Becki Keltner:

I am writing this letter because my husband, Jacob Keltner, should be remembered not as another statistic but as a man, a great man, who sacrificed his life to protect others.

Jake is the love of my life. We met at Western Illinois University in January 2004 and were inseparable. We married in 2007 and soon after I got a teaching job and we both focused on our careers doing what we love. In 2012 we were overjoyed to add Caleb (who is going to be president someday) to our family and then Carson (my fiery red head) blessed us in 2014. Jake and I agreed that I would leave teaching to dedicate all of my time to raise our boys, and it has been the best time of my life and our marriage. We loved each other fiercely. He was a tough guy but a secret sweetheart. He surprised me with the best gifts, nights out, and heartfelt notes. He would do things he hated with me (like seeing a ballet) because he knew how much I loved it. He supported every endeavor I ever took on and was there for me every second when my mom recently passed away. I was so lucky to have found a love so good and a man worth spending my life with.

He was a die-hard Chicago Cubs fan with me and we almost died watching the 2016 World Series together. He loved adventure. He would try anything - bungee jumping, zip lining, white water rafting and more with a huge smile on his face. Some of those he made me do with him, and he would hold my hand the whole time. He was brave and he made me braver.

My husband was a "cop's cop". He loved everything about his job and looked forward to going to work every day. He was a true patriot who wanted to protect the people of this country, so I knew when he was selected for a position on the U.S. Marshal's Fugitive Task Force, I couldn't have stopped him from taking the job if I tried. I knew it was dangerous, but he was smart, strong, and great at what he did. I knew he would protect his fellow officers like he protected our family.

Then I received the one phone call every police officer's wife has nightmares about, only this time the nightmare was real. Now I find myself a 33 year old widow, mother of two young boys who no longer have their daddy. It feels unreal. It's unfair. I have screamed. I have cried. Nothing can make this better.

He was an amazing dad. He always found ways to have fun with the boys. The night before he died he was teaching them how to catch and throw to get ready for little league. He built forts and set up family movie nights and "boy's nights" with the kids. We spent our summers relaxing and swimming in the pool. Deemed "the baby whisperer" he was the only one who could get Carson to stop crying as a baby by singing to him. Telling my children he was taken from us was the worst moment of my life. They are innocent and pure and certainly do not deserve this. They will never know their daddy like they deserve. They won't know him as a jokester. They won't know his contagious smile and his infectious laugh. He was taken from them far too soon.

Being a cop's wife is not easy. It's long days and nights where you don't know when they're coming home. It's the constant worry that something will happen to them. It's keeping the kids quiet when daddy needs to sleep for a few hours. It's going to events alone because they have to work and him always having to look over his shoulder when we were out together. But I am so very proud of him. He wanted to make the world a better place and he did make it a better place for my family. He was my rock. He supported me through thick and thin. He was my everything and we didn't have enough time. I need him and I don't know how to keep on going without him. I would give anything for one more hug, one more 'I love you', or one more joke from the man I love so much.

There are no words to sum up a man who meant so much to me and to so many others. My only wish is to have a world where we stop hating each other. I am overwhelmed with the support I have been given from people everywhere these past few days. I see you. You are good just like my husband was. I will keep that in my heart forever. No matter who you are, every person has a story and people who love them. Every person has hopes and dreams. We need to accept and thrive on our differences. It's what our country was built on. It's what Jake believed in, even after everything he had seen. It's what I believe in. He saw the worst of the worst every day but still had so much love in his heart. He was true and loyal. We all need to show each other love. Lift each other up. It's the only way to stop this unconscionable madness.

Floyd Brown, 39, was in court at 3 p.m. in Rockford. He faces federal murder charges, as well the possibility of the death penalty. He also faces state charges.

Brown was wheeled into the courtroom, having broken his leg, his arm and suffered other injuries after jumping out of a third floor hotel window to escape officers last week. Despite his extensive injuries, he was surrounded by five armed guards during the hearing.

Brown heard his charges, including federal murder charges, and answered in a clear voice that he understood them. The federal charges carry the possibility of the death penalty.

Brown waived his detention hearing and is being held on no bond. He is next due in court for a preliminary hearing on March 20 at 9 a.m.

His sister was in court Monday to support him.