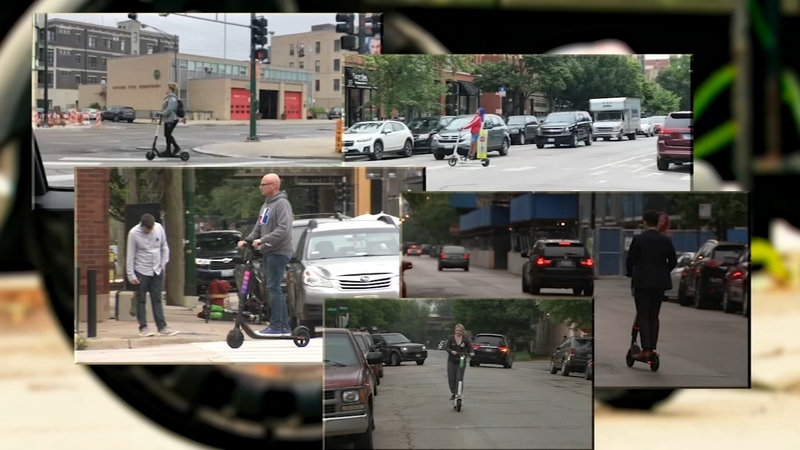 CHICAGO (WLS) -- Less than two weeks into Chicago's electric scooter pilot program, the ABC 7 I-Team has uncovered a stockpile of problems on Chicago's busy streets and sidewalks and an ever growing list of gripes.

The city says there were more than 60,000 rides the first week of the program, which launched in mid-June. Since then it's been easy for the I-Team to spot plenty of problems.

There are plenty of examples of people illegally riding scooters on Chicago's sidewalks, dodging pedestrians, and riders dumping those scooters wherever they want when they are finished using them.

"They need to be more respectful of pedestrians and stick to the streets," said resident Mark Shay .

"You wake up in the morning and you see them laying in front of your house; that's not cool," said Olga Gonzalez, who showed the I-Team a photo of a scooter laying across the sidewalk in front of her home.

When she goes to work in Bucktown, she's greeted by more scooters in the walkway.

The I-Team found several examples of scooters improperly left behind, and on their side.

The app-activated scooters don't have docking stations, but are supposed to be parked upright, out of the pedestrian walkway.

The I-Team found five abandoned scooters at the intersection of Chicago and Milwaukee. The city said companies are expected to pick up scooter litter and address other complaints within two hours of a drop-off.

"It's getting to be a bit of a visual nuisance as well as a traffic nuisance," Shay said.

And despite many of the scooter companies offering helmet giveaways, the I-Team only saw two people wearing helmets. Legally you don't have to wear one.

When Consumer Investigative Reporter Jason Knowles asked rider Alyssa Miller why she wasn't wearing a helmet, she said, "I gotta figure that out,"

A doctor at Rush University Medical Center told ABC 7 scooter injuries are already on the rise. Mary Fraction was treated for a broken wrist.

"I hit a crack and I was off before you knew it," she said.

It's not just scooter riders being injured. Allyson Medeiros' Go Fund Me page shows the 32-year-old sustained severe facial injuries. Medeiros said a weaving rental scooter hit him on his bike in the Ukrainian Village, leaving him unresponsive. He said he now needs surgery to place metal plates in his face. Chicago police are investigating.

The city's Department of Business Affairs and Consumer Protection (BACP) is overseeing the pilot program which includes10 scooter companies. There are fliers from the city on each scooter to educate riders about safety and proper placement of scooters when finished. GPS does not allow scooters to be driven out of the pilot zone on the city's northwest and southwest sides.

Lime scooters is holding safety demos where scooters are allowed. Nico Probst of Lime told ABC 7, "What we have learned over several launched over 100 cities across the globe, is it is good to get rider initiated on the front end and get them some safety tutorials."

Days before the launch, Chicago's BACP Commissioner told the I-Team Chicago's priority was to avoid problems like injuries and litter seen in other cities like Los Angeles and Raleigh, North Carolina. In Nashville, the mayor is in the process of banning shared scooter programs.

"I think having a pilot unlike other cities allows us to take a look at what works and what doesn't," said Rosa Escareno, Commissioner of BACP.

BACP said it will be tracking injury numbers based on when it can get information from area hospitals. The agency said early this week that it had received 45 e-scooter complaint calls since the program started June 15th.

FULL STATEMENT FROM DEPARTMENT OF BUSINESS AFFAIRS AND CONSUMER PROTECTION
"Chicagoans took over 60,000 rides in the first week of the pilot program. This is just one of the metrics we are using to evaluate this new program. As the pilot program continues, we're exploring all options for improvement and we will continue to build on our comprehensive education campaign to promote safe riding, encourage helmet use and ensure proper parking and riding procedures. If you see a scooter parked improperly, move it out of the way, call the company directly via the toll free number on the scooter or report it to 311. Check out Chicago.gov/scooters to learn more."
If you see scooters left improperly in the middle of the sidewalk or people riding on the sidewalk you should call 311.

Bird this week announced it will host a 100 city s.h.a.r.e. Safe Streets tour. Whether a first-time rider, an avid cyclist, or an experienced e-scooter rider, responsible riding helps improve our neighborhoods and communities for everyone. Bird's s.h.a.r.e. Safe Street events will help make responsible riding simple and achievable by providing attendees with five essential s.h.a.r.e tips: