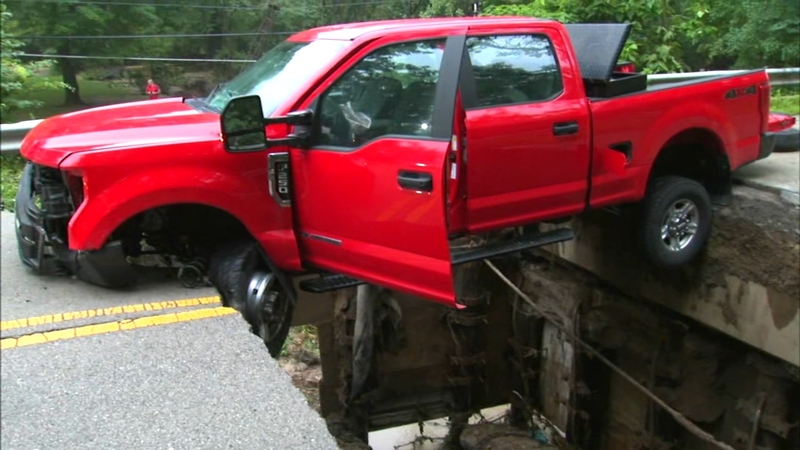 In Seneca, a bridge on River Road partially collapsed with a truck on it, police said.

Some good Samaritans pulled the truck driver, a LaSalle County worker, from the car to safety, according to Seneca police.

"Driver was very lucky that his vehicle didn't go into the creek," Seneca police Officer Kelsey Kowalski said. "He was uninjured; he seemed fine, a little shook up."

Officials said this is the first time in recent memory a bridge has collapsed in the area.

Investigators will look into how it happened Tuesday.

River Road between Dupont and Brookfield roads was closed until further notice due to the flash flooding, local officials said.

Road were impassable south of the river.

"There is a bunch of homes and a business on the other side of this," Seneca Mayor Jeff Olson said. "It's going to be important to get it back open."

The water has since receded, and clean-up continued later Tuesday morning.

Seneca-area residents said the flash flooding came out of nowhere, and they barely got to safety.

"As we down there, we heard the walls cracking," said Patience Orsburn, whose house flooded. "That's when we seen the back wall of the basement cave in; we grabbed each other and ran out."

It's been a terrifying ordeal for Orsburn and her family. She's 6 months pregnant and just moved into a home near the Illinois River with her significant other, so they could have more room for their new baby. Now everything is destroyed.

"We went from a tiny apartment, and was all excited to finally start here with our new baby, and now everything is gone," she said.

They managed to escape the flash flood waters after their basement walls began to cave in. They rescued their cat and ran out. They didn't even have time to get their shoes on.

Just outside their door, they saw flood waters rushing down from a hill nearby.

"Just see it rushing, and there is no way to stop or catch anything," she said. "You couldn't do anything; there was no time. You could just grab each other and go; there was no time to think about anything. You didn't think it would hit that fast."