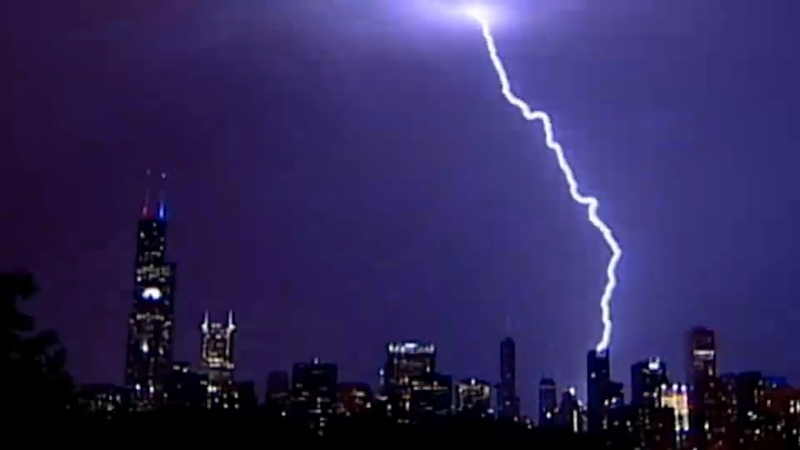 CHICAGO (WLS) -- You may know the slogan, "when thunder roars, go indoors." That's what you should do when a thunderstorm is nearby. Lightning is one of the most dangerous aspects of storms. It is unpredictable, happens fast and often without any warning.

Lightning is one of the most fascinating weather phenomena our planet. There are about 100 bolts of lightning every second on Earth, a patchwork of thunderstorms discharging electricity.

For millennia, people have been trying to understand lightning. The Greeks both marveled and feared lightning as it was hurled by Zues. For the Vikings, lightning was produced by Thor as his hammer struck an anvil while he was riding his chariot across the clouds. Statues of Buddha show him carrying a thunderbolt with arrows at each end. And in North America, tribes believed lightning was due to the flashing feathers of a mystical bird, a thunderbird, whose flapping wings produced the sound of thunder.

Today, we know that there are more than 2,000 thunderstorms active throughout the world at any given moment, and every second there are 100 flashes of lightning on Earth. Each year, lightning is responsible for about 24,000 deaths, about 240,000 injuries and millions of dollars in property damage around the world.

HOW TO STAY SAFE

So, what are some ways to stay safe during lightning? There is no safe place to be outside during a thunderstorm. If you can, head inside. But if there are no options for shelter here are some actions to take to slightly reduce your risk.

30 Minute Rule:
You should wait 30 minutes after you hear the last rumble of thunder before you resume your outdoor activity.

If In A Car:
You are safe from lightning inside a hardtop car as long as you close all the windows, and don't touch metal objects inside the car.

If Inside:
- Don't touch electrical equipment or electronics plugged into the wall
- Stay off corded phones and avoid taking a shower and other plumbing
- Stay away from windows and doors, and stay off porches

Over a 12 year period, fishing is the most dangerous activity to be caught doing during a thunderstorm. And of those victims of lightning, 80% were men.

HOW DOES LIGHTNING FORM?

There is still much we don't know about how it forms. But most lightning forms like this. Electrons begin zigzagging downward known as a "step leader." As the leader nears the ground, it draws a positive charge upward. As the leader and streamer merge, a powerful electrical current flows. The return stroke is what we see, traveling at 60,000 miles per second. The Process may repeat several times along the same path causing a flicker. All of this happens in less than a second.

There are different types of lightning. Most common is intracloud lightning where lightning stays in the same thunderstorm. The next most common is cloud to ground; this the most dangerous as it impacts objects and potentially people on the ground.

Myth: Cars are safe because the rubber tires insulate them from the ground.
Truth: Rubber tires provide no protection from lightning. Cars are safe because of their metal shell and steel frame. Convertibles are not safe.
Myth: Lightning-strike victims are electrified and should not be touched.
Truth: Lightning-strike victims carry no residual electrical charge. It is perfectly safe to touch a lightning victim to give them first aid.
Myth: If it is not raining, then there is no danger from lightning.

Truth: Lightning often strikes outside of the rain area to as much as 10 miles (even greater distances in exceptional situations).
Myth: Heat lightning occurs after very hot summer days and poses no hazard.
Truth: Heat lightning is a term used to describe lightning from a thunderstorm too far away for the thunder to be heard. The lightning hazard increases as you move toward the storm and eventually the thunder will also be heard.
Courtesy of NOAA NWS office in Melbourne, Fla.

- The air in a lightning strike is heated to 50,000 degrees F. It is this rapid heating of the air that produces the shock wave that results in thunder.
- A ground stroke can produce somewhere between 100 million to a 1 billion volts of electricity.
- The average peak current in a cloud-to-ground lightning stroke is 100,000 amperes.
- The estimated diameter of a lightning channel is about 1 inch.
- The length of an average cloud-to-ground channel can range from 2 to 10 miles.
- You can tell how far away a lightning stroke is by counting the seconds between seeing the lightning flash and hearing the thunder.
- Five (5) seconds approximates one (1) mile of distance.
- If you see a flash and instantly hear the thunder, the lightning stroke was very close. Take shelter immediately.
Report a correction or typo
Related topics:
weatherthunderstormlightningsevere weather
Copyright © 2022 WLS-TV. All Rights Reserved.
SEVERE WEATHER
Chicago braces against bitter cold, dangerous temperatures
Wind Chill Advisory issued overnight in some suburbs | Live Radar
Chicago weather forecast includes snow into Monday | Live radar
Baby, 3 others freeze to death in alleged border smuggling near border
TOP STORIES
2 charged with murder of 8-year-old girl in Little Village: CPD
Husband shares journey after losing wife in crash that killed Kobe
Man released from prison after twin brother confesses to murder
IL reports 15,732 new COVID cases, 143 deaths
Who is Rhone Talsma? Chicago Jeopardy! champ dethrones Amy Schneider
Chicago Weather: Mostly cloudy, cold
Kathryn Kates, 'Orange is the New Black' actress, dead at 73
Show More
100% of students, staff at SW Side Chicago high school vaccinated
Supreme Court Justice Stephen Breyer to retire
75 years after Al Capone's death, it's not your dad's Chicago Outfit
Scientists monitoring new omicron subvariant BA.2
1 dead, 38 missing after boat capsizes near Florida; 1 survivor found
More TOP STORIES News