Chicago protests: Parents of children killed by police seek to shift focus from destruction to change

WLS
By Sarah Schulte
CHICAGO (WLS) -- Many families in Chicago can relate to what George Floyd's relatives are going through from their own personal experiences.

Some South Side residents want to regain the narrative and move it away from the focus on looting and destruction.

Steps away from a looted store, Schantell Brooks stood holding a big picture of her son, Michael Westley. The 16-year-old was shot and killed by Chicago police a few years ago.

"My son was killed by Chicago police April 11, 2016," said Tambrasha Hudson, the mother of Pierre Loury. "My baby was running away."

The emotion never goes away for families of loved ones killed by police. They joined community activists Monday to call on Chicago to look beyond the broken glass and return the conversation back to the pain so African Americans have felt for centuries.

"We shouldn't have to be destroy anything to be heard. Why do we have destructive to be heard," community activist William Calloway said.

"That means if you don't like what police are doing, get a badge and you become police and help your people," Bland said.

Former Chicago Bear Matt Forte said nothing will change until all races get involved.

"I don't care if you are from the northern suburbs or whatever, come down here, show up and help," Forte said.

And community activists are urging people to stay vocal with peaceful protests. They fear nothing will change if their voices get lost with the attention payed to looting.
Report a correction or typo
Related topics:
societyprotestgeorge floydu.s. & worldpolice brutalityrallychicago police department
Copyright © 2020 WLS-TV. All Rights Reserved.
GEORGE FLOYD 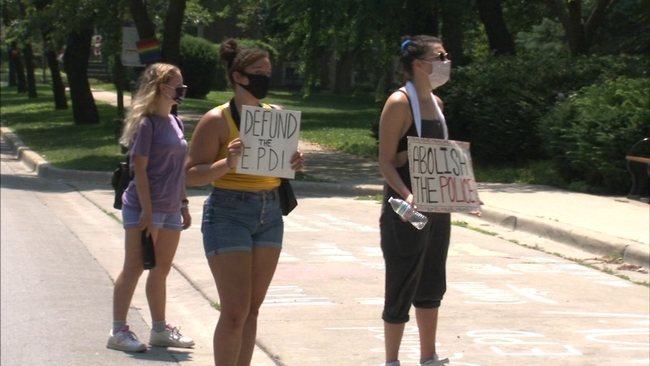