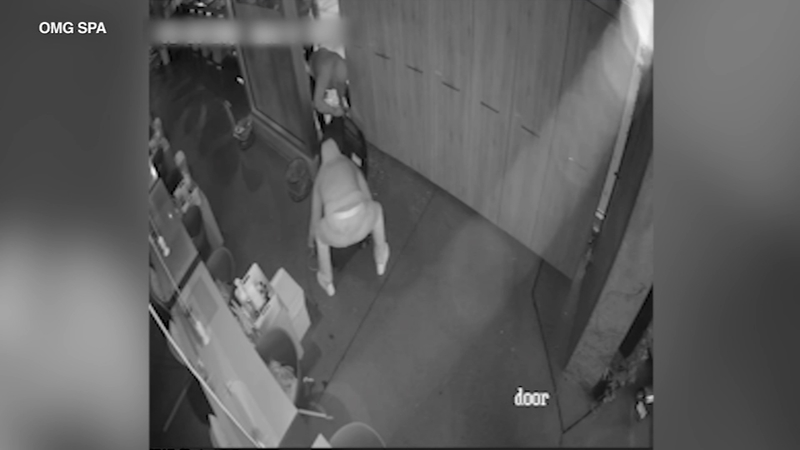 CHICAGO (WLS) -- An ATM was stolen from a South Loop salon Wednesday morning, and it's just one of multiple overnight crimes police are investigating.

Surveillance video appears to show hooded thieves breaking into the OMG Spa and dragging its ATM out a shattered door before driving off early Wednesday morning.

"I think it was literally like, not even a whole minute, they were in and out," manager Mariana Jimenez said.

Jimenez said nothing else was taken, but she wonders if the salon was deliberately targeted.

"You can't even see the ATM from outside," she explained.

Detectives are looking into multiple overnight thefts, but have not yet said if they are connected.

Around 1 a.m., three luxury vehicles were stolen from the Hertz car rental near O'Hare. Police said the thieves took two Infinitis and a Range Rover.

Roughly two hours later, a Northwest Side bar was smashed in, where police say an ATM was missing. Next, burglars hit OMG.

"Shattered glass everywhere. But luckily, no one got hurt," Jimenez said.

Soon after, a nearby dry cleaners was damaged. The manager there said nothing was stolen.

There is still no word from Chicago police on any arrests or possible connections.

But police say a witness saw a suspect flee the bar in a white SUV. Surveillance video from the spa appears to show those thieves also driving off in a white SUV.

And around 7 a.m., police converged on a white Infiniti SUV in the 1800-block of South Lawndale. An ABC7 photographer spotted police taking someone into custody before 9 am.

"People might be scared to come down here now. You never know," Jimenez said. She added she's not sure if she wants the ATM back, because she doesn't want to be robbed again.