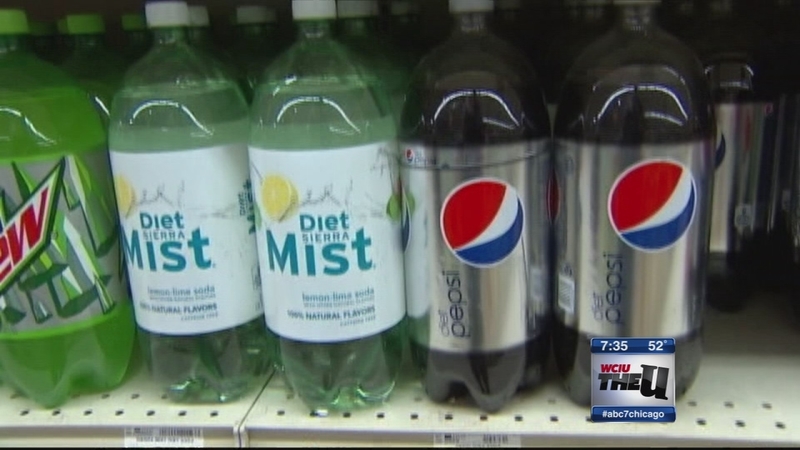 CHICAGO (WLS) -- Cook County residents could soon find themselves digging deeper into their pockets if they want to buy a soda.

"They're starting to tax everything. I mean it's getting a little ridiculous that they're taxing pop," Marty Guzik, Skokie resident, said.

Guzik bought a root beer at lunch and can't believe Cook County is considering the tax.

But Preckwinkle said it's a way to protect people's health.

Preckwinkle is trying to balance a $174 million deficit in her proposed budget. She said without the tax, she'd have to cut spending on healthcare and public safety.

"This is a tough budget that she has presented but it does stabilize us moving forward," Cmsr. Jesus "Chuy" Garcia said.

"You're talking about taxes all over the board being raised," Monty Williamson, manager of the Fish Keg, said.

Even artificially-sweetened diet pop would be taxed. At the Fish Keg on Howard Street, Williamson said an 85 cents 12 ounce can, after the highest in the nation sales tax sells for 96 cents, will cost a $1.08 under the Preckwinkle plan.

"We want to keep our prices as low as possible and its tough with all the taxes that are being charged to us," Williamson said.

The Illinois Beverage Association sent out a release Thursday that said a two-liter bottle of soda priced at 99 cents would cost about 68 cents more if the tax passes the board. That's an increase of about 70 percent.

Many people who spoke with ABC7 Eyewitness News Thursday were against the proposed tax. Debbie Sadowski's 15-ounce double-shot Starbucks energy drink would cost her about 15 cents more.

"I wouldn't want to pay the extra tax. No. I'm against it," Sadowski said.

Dan McHugh said he is for the tax because it could help prevent obesity and diabetes. The World Health Organization urged counties to raise taxes on sugary drinks earlier this week.
"I am for any kind of thing that stops people from being obese," McHugh said.

The American Beverage Association, which is already running ads against the proposed tax on sugary drinks, is suing the city of Philadelphia for imposing a similar tax . The ABA said people should not have to pay a sales tax and a beverage tax on one item.