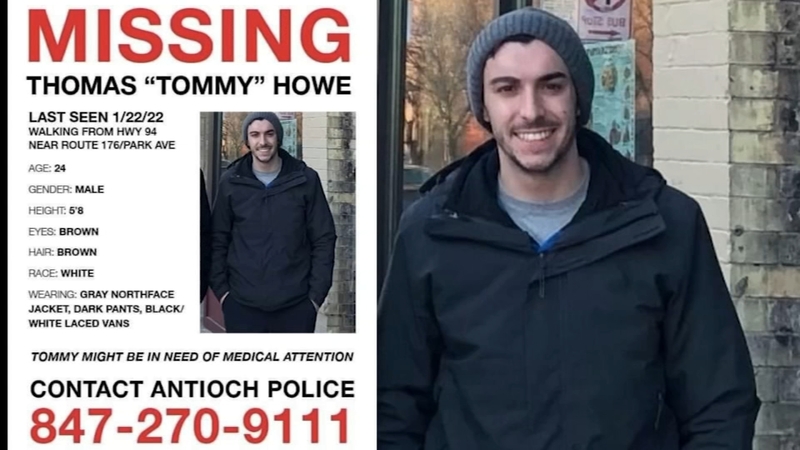 ANTIOCH, Ill. (WLS) -- The family of an Antioch man who went missing three weeks ago after an accident on Interstate 94 is pleading for his safe return.

"In his 24 years, he's accomplished more than we could have ever imagined, all while being one of the most humble people we know," said his father, Tom Howe. "He's the first person to drop everything's he's doing to help someone else out."

"He's the type of person that we all strive to be," said Howe's mother MaryMargaret.

Howe's parents have been asking for the public's help and are now offering a $10,000 reward for information.

"Tommy, if you see this, and if you are confused, please know and remember how deep our love and care is for you and the strong bond that our family has," his mother pleaded. "Please call us if you can."

Two days after the crash, Howe's work cellphone was found in the Old School Forest Preserve, but nothing else was found.

Since Howe vanished, police and volunteers have scoured the Forest preserve with search parties, trained K-9 units, private aircraft and even drones, all with no luck.

His family was emotional Friday and said this is very out of character for Howe. They hope someone knows something that could lead them to their son.

"Please, please, we ask for your help and guidance to bring him home," Howe's mom said.

Police said the investigation remains active and they have been following up on every possible lead they have, with over 200 leads so far.