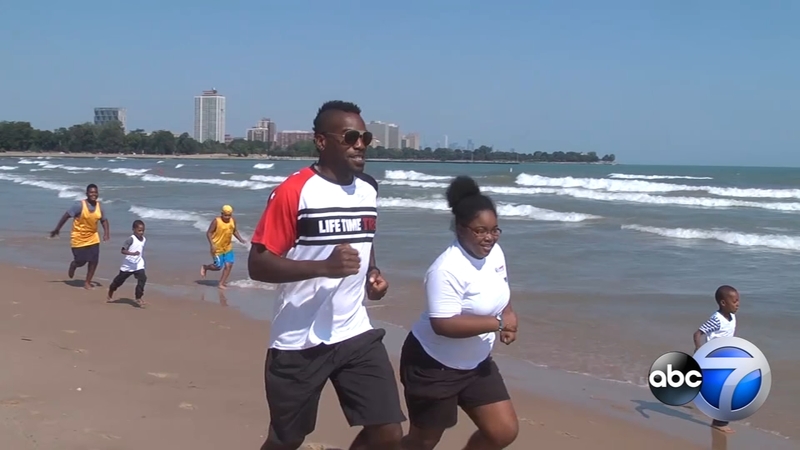 "When I went to my first triathlon races and I looked around and I saw I was pretty much the only black person there, I didn't really have anyone that I could relate to that I could really talk to about my experiences," recalled Fennell.

He believes he's the first professional African American triathlete and wants future generations to benefit from the competition that has given him so much.

"That opportunity of having community, the chance to help build yourself as a person, self-reliance, it just opens up a whole lot more doors," he said, adding, "if it puts you on the path of going to college and then getting a solid job and then living a healthy lifestyle, to me, that's what I see as winning."

On Wednesday he coached kids alongside Tri-Masters Sports Initiative Programs, a non-profit that prepares Chicagoland kids in the water, on bicycles, and on foot for the grueling competitions.

"... We set a goal to compete and complete a triathlon. All those goals that we set goes into their school work, goes into life," said Tri-Masters Executive Director Bernard Lyles.

He said Fennell's presence alone will have an impact on these children.

"He is our representative in the sport and I'm so proud to just meet him and know that he still wants to share his lifestyle and his experiences with the kids," Lyles said, adding, "There's no excuses, no obstacles about why I can't do it. This is why you can do it."

He's glad to work with Max Fennell and generally see other African Americans involved with the sports he loves, like swimming.

"It says a lot...to know that there's other people out there, to know that people are trying as much as you are that are the same race as you," Smith said.

"Doing a triathlon is like life. You get past it and you never give up," she said she learned from the pro.