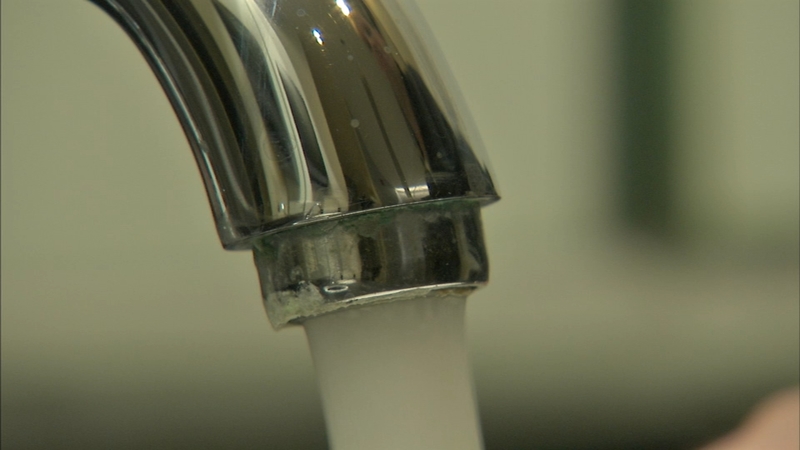 UNIVERSITY PARK, Ill. (WLS) -- Lead in water is a problem across the nation that potentially will be addressed by President Joe Biden's proposed infrastructure plan, but it continues to plague families' homes across Illinois.

The ABC 7 I-Team investigated one of the hardest-hit communities where 7,000 residents have to drink bottled water.

Imagine if you weren't able to use your faucet to drink water, brush your teeth, cook or wash dishes. That's what the residents of University Park have endured, not for weeks, but for years. Now, they have new concerns.

University Park resident Tony Townes won't drink water from his tap, even with a filter. He fears his water is not safe to drink due to lead contamination.

"Our water is not fine until the EPA says our water is fine. It's been going on for two years now," he said.

That's right. It's been nearly two years since lead was first detected in water flowing into the homes in University Park.

"My concerns are showing this community that you care about what you're giving them and what you're putting into their household into their bodies. It's about making things right," resident Eboni Rucker said.

The south suburban village receives its water from Aqua Illinois. In 2017, the private company switched University Park from well water to the Kankakee River and added a chemical to improve the taste and color, inadvertently causing water pipes to leach dangerous lead that was first found by the EPA in 2019.

"If they only would have had genuine concern and care to take the time and properly test the strength of the chemical, all of this could have been avoided," said University Park Mayor Joseph E. Roudez III.

In a statement, Aqua said before adding that chemical to the water, they "did more testing than was required by state and federal law" and "shared a national expert's detailed study with regulators before the transition."

"We want to give a particular focus on environmental justice and so areas where they're disadvantaged historically environmental issues get less attention," Illinois Attorney General Kwame Raoul said.

As a result of the lawsuit, Aqua must complete two six-month testing cycles of the water and supply filters to homeowners. Aqua must also provide bottled water. The company said they will still deliver to residents who are "homebound or physically unable to pick up."

"Clean, healthy, drinking water: everyone should have that justice," Roudez said.

Most residents pick up their weekly supplies at Aqua headquarters.

"I pick up for my elderly neighbors," Townes said.

But University Park Resident Pamela Johnson came herself to get her water.

"It's really hard, especially for elderly," she said.

Aqua Illinois declined an interview, but in written statements said that from the beginning they've "taken unprecedented and immediate action to put our customers' well-being first."

The first six months of EPA data shows the lead levels are now under the threshold of the lead allowed. With six months of testing to go, Aqua said they "agreed with the State to continue to provide free filters and other resources to customers ... as we work on restoring customer confidence."

Mayor Roudez is upset that Aqua tests only 4% of homes. But Aqua said that is above the state's requirement and it offers free tests to anyone who requests them.

Resident Ben Gadison said he's worried about the health of his grand-daughters: "I don't think it should take this long to get straightened out."

The mayor says peace of mind could be very costly for nearly 1,500 families with pipes that could still leach lead.

"If the residents want to ensure that they don't have any lead pipes or anything, then they have to bear the expense themselves on replacing the lead pipes within the home," Roudez said.

Aqua says pipes don't have to be replaced, and said they're using a regulator-approved treatment that focuses "on building a barrier to minimize contact between the fresh water and any lead in the home plumbing."

"I'm in no position to be replace the pipes in the house," Townes said.

Aqua said their customers' health and safety are at the heart of what they do and they "have no intention of stepping away and are committed to providing and maintaining drinking water that meets the federal and state regulatory requirements put in place..."

But Rucker struggles with trusting the company, and wonders: "How can you repair the harm that you caused our community?"