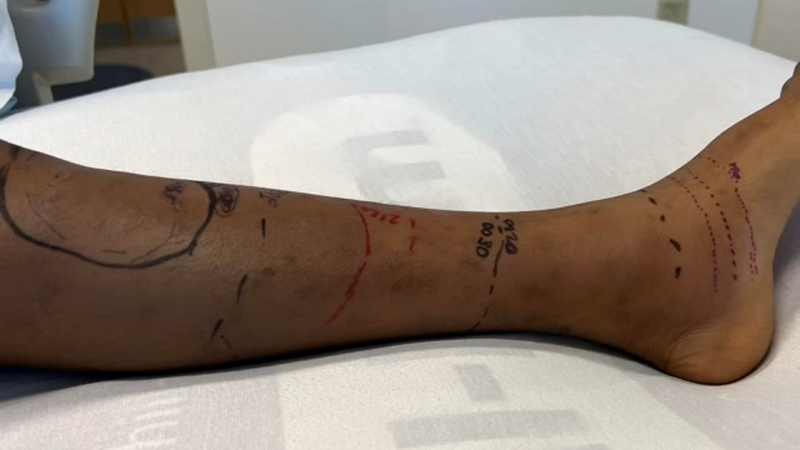 JACKSONVILLE, Fla. -- A fun day playing in the backyard ended with a Florida boy spending several days in the ICU after he was attacked by a venomous snake.

Now, the boy is slowly regaining his strength and learning to walk again.

Elijah Bustamante has his smile back after a scary encounter with a snake left the 7-year-old boy in the hospital.

"I was in the backyard playing and I was going to pick up a rock and the snake jumped out and bit me," he recalled.

Elijah was rushed to a nearby hospital with his leg extremely swollen from the large bite, WJXT reported.

Doctors gave him seven rounds of antivenin and he was kept in the ICU for four days. They believe the snake that jumped out of a bush and bit Elijah was a venomous water moccasin.

"He said like a dark gray with dark spots and a fat head. A lot of the doctors went on their phones and pulled up different ones and every time he picked out one it ended up being the water moccasin snake," said Elijah's mother, Sanita Bustamante.

Florida's Poison Control Center said there have been 40 patients who have reported bites so far this year in the 10 counties in the Jacksonville area.

Spokesperson Mike McCormick said if you are bitten by a snake, call poison control and get medical care immediately.

He also emphasized what not to do.

His next step is relearning how to walk through physical therapy.

In the meantime, his family is avoiding the backyard, especially because the snake was not trapped.

"My message would be, you know, just like when you think it's not gonna happen, we're good, it can happen," Elijah's mom said.