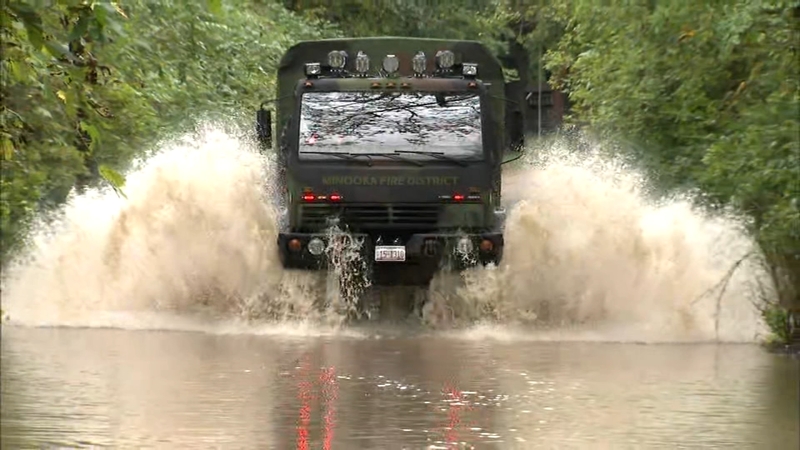 The National Weather Service has issued a Flash Flood Watch for Chicago from Saturday at 10 p.m. to Sunday at 10 a.m.

The most affected areas were Kankakee and Will Counties, and some areas saw over 6 inches of rain.

Residents in those areas continued to dry out from all the rain on Friday, counting their blessings from what could have been much worse.

"We had up to waist-deep water," Nolan said. "We rescued about 11 people last night off the roadways because they were driving on the flooded streets."

Heavy rain and flooding continue to move through the Chicago area Saturday morning.

High standing water was the biggest problem in Minooka and elsewhere in Will, Grundy and Kankakee counties.

Homeowners battled the rising waters, which for the most part stayed short of causing a lasting problem. Flooded backyards and garages appear to be the worst of it.

"The water was all over the place," said Minooka resident Jean Lawler. "We don't have to deal with this too often, but it was a downpour for hours."

By Saturday afternoon, floodwaters had begun to recede.

Authorities are warning residents in affected areas not to drive or walk through flooded streets.

A Flash Flood Warning was in effect for Cook, DuPage, Kankakee and Will counties in Illinois and Lake and Porter counties in Indiana until 1:45 a.m., for LaPorte County, Indiana, until 2:15 a.m. and in Grundy, LaSalle and Livingston counties until 3 a.m.