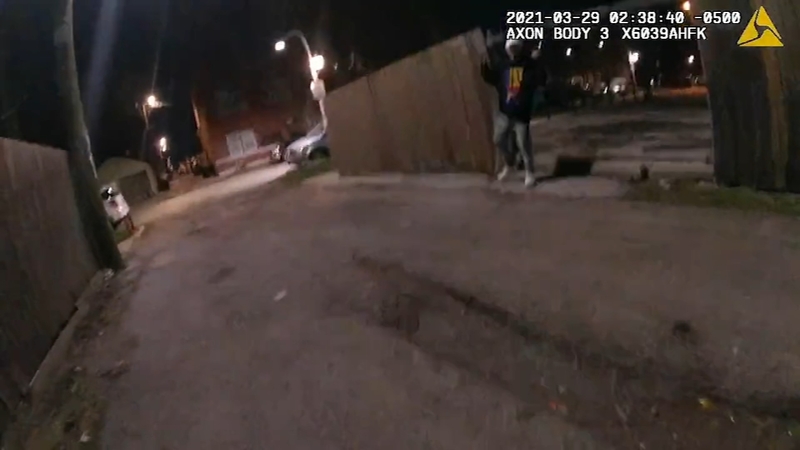 EMBED <>More Videos
CHICAGO (WLS) -- Chicago police bodycam video that captured the deadly police shooting of 13-year-old Adam Toledo was released to the public on Thursday by the Civilian Office of Police Accountability, 16 days after the incident.

Nearly 30 pieces of video and other materials were posted to the COPA website just after 2:30 p.m. Thursday.

The video from the officer's bodycam shows him running down an alley, chasing Toledo. He yells at him to stop and when he catches up with him fires a single shot.

The officer involved in the shooting was identified in the police reports released by COPA as 10th district patrol officer Eric Stillman.

They key moment took about one second, according to Chicago police officials.

Chicago police allowed reporters to view their video compilation of the moments that led up to the fatal shooting of 13-year-old Adam Toledo by a Chicago police officer.

A fraction of a second later, Toledo's hands move up, without a gun, and he is shot in the chest and killed.

Authorities have also released video from Officer Stillman's body worn camera of a gun a few feet away behind a fence Toledo was standing next to, as if he tossed it aside when Stillman had him cornered. Police said Toledo was shot as this played out in about one second.

Another video released shows the shooting from the angle of surveillance camera with a wider view of the alley where it occurred. Toledo can be seen in a gap in the fencing.

Among the videos released by COPA was a suveillance video showing the police shooting of Adam Toledo from a different angle.

The police report says Stillman said Toledo did not follow verbal directions, fled, used significant force and was armed with a semiautomatic pistol.

ABC7 Legal Analyst Gil Soffer, a former federal prosecutor, said the case comes down to a question of when Toledo was shot.

"Within a second before that, we see what appears to be a gun in Toledo's hand and that he drops it before he raises his hands," Soffer explained. "If that's the case, the officer has a very credible defense."

"This incident was solved in .8 milliseconds, so it happened very quickly, it happened probably faster than science had proved an officer would be able to think his way through the situation," said Ed Farrell, former U.S. Marshals Service supervisory inspector.

"You see Mr. Toledo raise his hands and turn around," said attorney Anthony Burch. "If you look at that and listen to what is going on, he is following the directions of the police officer and he's shot."

Initially, a police watchdog group Invisible Project said Stillman 34, did not have a history of deadly force violations or complaints. Thursday night they updated their data, saying Officer Stillman has faced several use of force complaints and official inquiries between 2017 and 2020, none of which resulted in any action.

Stillman's attorney did not respond to messages from the ABC7 I-Team.

Chicago police said Toledo was fatally shot as he and 21-year-old Ruben Roman ran from police down an alley in Little Village about 2:30 a.m. March 29.

ShotSpotter video released by COPA supports the narrative prosecutors gave in court. It records six to eight gunshots, which along with 911 calls prompted police to respond to the area.

At the scene, police arrested Roman who is believed to be the other person in the alley seen on the bodycam video. He remains locked up on gun and child endangerment charges related to the shooting.

Prosecutors said a handgun fell from Toledo's hand. Thursday afternoon the Cook County State's Attorney's Office released a statement about that claim, saying, "An attorney who works in this office failed to fully inform himself before speaking in court. Errors like that cannot happen and this has been addressed with the individual involved. The video speaks for itself."

Police say the gun found at the scene was previously used by Roman and matched the shell casings found at the site. Police believe Roman fired the shots picked up by the ShotSpotter and then gave Toledo the gun.

Even with the release of these videos by COPA, the civilian agency investigators will now examine the timing of how this played out, what the threat was to the officer in the moment, and whether he followed department pursuit and deadly force rules.

COPA will review witness accounts, reports by Stillman and others, and question officers who were present to determine whether the use of force in this case was justified. That process will take some time.

The Toledo family attorney spoke following the video release, saying she wants the bodycam video forensically analyzed and emphasizing that Toledo did not have a gun in his hand when he was shot and was complying with police orders.

"I'm not going to deny that, that it could have been a gun. But I can't tell you with 100% certainty until I have that video forensically analyzed and enhanced," said Adeena Weiss Ortiz, attorney. "But it's not relevant, because he tossed the gun. If he had a gun, he tossed it. The officer said 'show me your hands,' he complied, he turned around."

The attorney for the Toledo family spoke after COPA released bodycam video of the fatal police shooting of their 13-year-old son.

"At the time Adam was shot he did not have a gun, OK? In that slow-mo version, whatever he had in his hand whether it was a gun or something else, there was something in his hand, he approaches the fence, he lets it go, he turns around and he's shot," she added.

Ortiz called for calm in the wake of the newly-released video. She said she wants justice for Adam and peace in the wake of the incident, and thanked the Little Village community for its support on behalf f the family, and at this point has not indicated whether a lawsuit will be filed.

Mayor Lori Lighfoot was visibly upset while speaking ahead of the release of bodycam video of the CPD shooing of 13-year-old Adam Toledo.

In a joint statement Thursday morning, Mayor Lightfoot and the Toledo family's counsel said all agreed that all material related to the shooting should be released, "including a slowed-down compilation of the events of March 29 that resulted in the tragic death of 13-year-old Adam Toledo."

"We acknowledge that the release of this video is the first step in the process toward the healing of the family, the community and our city. We understand that the release of this video will be incredibly painful and elicit an emotional response to all who view it, and we ask that people express themselves peacefully," the statement went on to say.

Lightfoot spoke at a noon press conference Thursday with community leaders. Toledo's death hit home for her, as the mother of a 13-year-old herself.

"Watching the bodycam footage that shows young Adam after he was shot is extremely difficult," she said.

She asked that people think about Adam Toledo and his family first and foremost while viewing the video.

"I also ask that each of us to give them space to breathe," Lightfoot said. "No parent should ever have a video broadcast widely of their child's last moments, much less be placed in the terrible situation of losing their child in the first place."

Lightfoot said that she has not seen evidence that Toledo shot at police.

Earlier in the afternoon, a number of aldermen were also given an opportunity to view the footage themselves at City Hall.

"It was a very difficult video to watch. Very horrific. And I don't think you can put another term to it other than it being tragic," said 29th Ward Alderman Chris Taliaferro.

Taliaferro, himself a former police officer, would not say if the shooting was justified, leaving that to COPA, but he did say his heart went out to the Toledo family, as well as to the officer who fired the fatal shot.

"There was an immediate sense of compassion. The officer immediately tried to preserve Mr. Toledo's life. He immediately began to render aid," the alderman said.

Mayor Lightfoot said the city failed Adam Toledo, and must do more to help families and prevent another tragedy like this.

"It is critical to provide social support to all of our residents especially are young people who are particularly vulnerable to violence. This is again, a truth not up to debate. We've got to do more," she said.

Other city leaders also said the city of Chicago needs to do more to help young people like Adam Toledo have the opportunities they need to grow up and not get caught up in the lure of the streets."

"To me it's all about what can we do for tomorrow and for the next Adam Toledo's of our city. How do we recover our credibility, how to we recover ourselves from this," said 12th Ward Alderman George Cardenas.

"I think the story that we all have to keep in our mind is a 13-year-old boy whose life was taken, and we are all, each and every one of us, complicit in our inability to get this boy the future and his family's future as this young man, this young boy deserved," said Ric Estrada, CEO of Metropolitan Family Services.

Latinx leaders joined the mayor in calling for change and grieving Toledo's death, but asked community members to respond with calm.

"I call for peace," said Karina Ayala-Bermejo, CEO of Instituto del Progresso. "I call for justice, but I also call for non-violence as a mother of three teenagers whose worst nightmare is to get a call like this."

She said she understands that people will feel anger and pain when they see the videos.

She declined to say whether the officer's actions were justified, and said people need to let COPA finish its investigation.

"Even as our understanding of this incident continues to evolve, this remains a complicated and nuanced story. And we all must proceed with deep empathy, calm, an importantly peace," the mayor said.