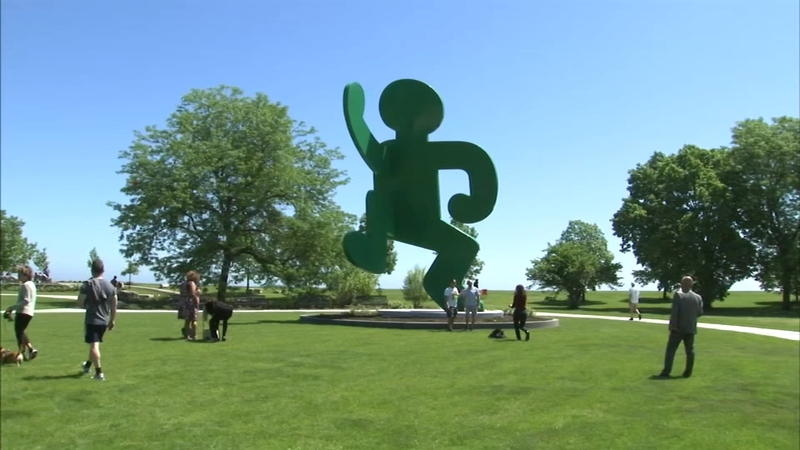 CHICAGO (WLS) -- The AIDS Garden Chicago officially opened Thursday, spanning two and a half acres of the lakefront just south of Belmont.

Mayor Lori Lightfoot and Gov. JB Pritzker were among those who were on-hand for the ribbon cutting.

They were joined by other state and leaders to launch Pride month in the area.

"I see just a handful of guys who survived, so this is a memorial," said Illinois Rep. Greg Harris (D-13th District.).

"It's in memory of every life lost to HIV and AIDS here in Chicago that we dedicate this garden," said Illinois Governor JB Pritzker.

This spot is the city's first public monument to memorialize the early days of Chicago's HIV epidemic and to honor those who continue to fight the disease.

The first phase of this $1.5 million garden was complete in late 2019, and ground was officially broken last June. It fully opened on Thursday.
The garden includes areas designed for reflection, education, honor and pride.

The 2.5-acre location, which includes a 30-foot sculpture, is the original spot of the historic Belmont rocks, a space where the local gay community gathered between the 1960s and 1990s.

Lightfoot shared a story of when she came there long ago before she came out.
"I was amazed to see what felt like a sea of diverse, beautiful humanity that was sitting here, hanging out, dancing, playing music, barbecuing. I'd never seen or experienced anything like that before, and it gave me a sense of assurance that I was making the right decision by coming out and embracing who I was," Lightfoot said.

"This was the destination," said Lori Cannon. "Enjoying the lakefront, this was our place."

"It was a big thing and The Rocks was a place where people came and felt safe," said Donald M. Bell.

Cannon, Bell and Owen Keehnen are among the storytellers visitors can listen to as they walk through the garden.

"Happy times and friends and cookouts," Keehnen recalled. "It's what was needed at a time when the rest of life was not that."

Visitors can scan QR codes throughout the garden to hear their stories. Others are invited to share their stories of those times and those lost, and memories of this historic place.