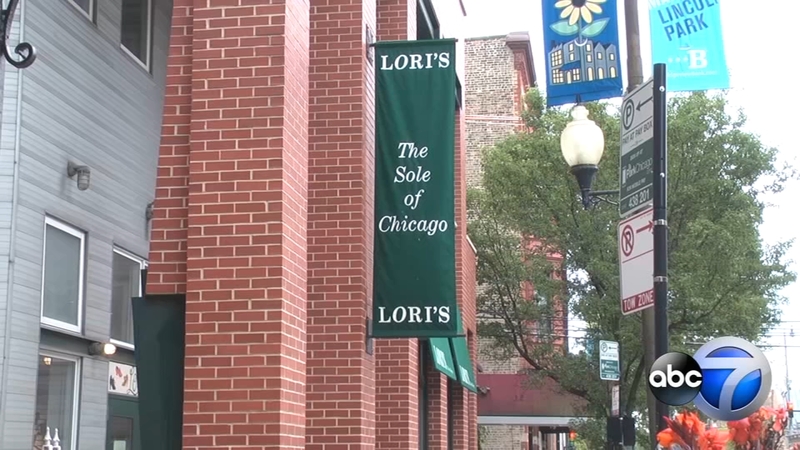 CHICAGO (WLS) -- At Lori's Shoes, there's no shortage of footwear. The Lincoln Park shop boasts all kinds of women's styles-elegant, casual and often colorful. But there's nothing quite like the new sneakers owner Lori Andre designed.

"We wanted to create the red sole," she said, holding the first pair of special addition ALS sneakers she'll be selling this fall.

They're red in support of those fighting the illness, known as Lou Gehrig's disease in honor of the beloved baseball player who himself suffered from it.

You may have also heard about ALS during the viral video "Ice Bucket Challenge" that made the rounds on social media a few years back. People would challenge friends to spread the word about ALS and raise money for research, then dump a frigid bucket of water on their heads. The videos are fun to watch and even involved former President George W. Bush.

ALS "affects the nerve cells that make muscles work in both the upper and lower parts of the body," explains the CDC's website.

As nerves and muscles stop communicating, the CDC goes on to say, muscles weaken and eventually those with the disease become paralyzed. Furthermore, the CDC says no definitive cause has been identified; there is no cure.

"Cognitively you're fine but you're sort of locked in because you have no movement," described Andre, adding, ""you lose mobility where your muscles just become so weak that every day activities... (become) virtually impossible."

Though she'd heard of the disease in the past, Andre found herself becoming an expert two years ago when her husband was diagnosed with ALS.

"When we received the diagnosis our life was at a standstill for a brief moment in time, trying to digest everything," she recalled.

Her husband, Andre said, is one of the luckier patients with the disease progressing very slowly. She added that they haven't changed their lifestyle-jokingly adding that her husband's one limitation is he can no longer "drive to the hoop and make a layup."

"If you saw him you probably wouldn't know that he has ALS," she said.

Still, the illness looms and Andre wants to do her part to find a cure.

"I decided if I was going to put my energy to something that was meaningful, that could raise awareness and also raise funds, that it seemed like shoes would be a very natural thing to do," she said.

She partnered with a manufacturer that also has a family connection to the disease. Together, they've created a deliberately lightweight, elastic shoe meant to be easily worn and provide comfort to women themselves battling ALS. There's also a simple message inscribed above the heel: "Strike out ALS," reads the pull tab.

She hopes all her customers will love it considering it's got "a little fashion" thrown in too.

The new look debuts at the upcoming Les Turner ALS Foundation's ALS Walk for Life on September 29 at Soldier Field. The walk is sponsored by ABC 7.