Ten years ago, Fourth Presbyterian Church hosted an interfaith prayer service. On Sunday night, the downtown Chicago church did it again, hoping to rekindle the message that Sept. 11 should not about anger but unity. At noon Sunday in Chicago, police cars and fire trucks throughout the city stopped and sounded their sirens before the 4th annual charity softball game between Chicago firefighters and police. Before the game, a special 9/11 ceremony was held at Little Cubs Field in Humboldt Park.

Mayor Rahm Emanuel says Sept. 11 is his daughter's birthday, and like every American, he says he'll never forget that day a decade ago.

"When I came home that day 10 years ago, just outside our house, we lit candles with neighbors and sang 'God Bless America,'" Emanuel said.

Other events in Chicago included presentations of the American flag by O'Hare and Midway airports as well as the CTA's presentation of a commemorative message on digital screens across the system reading, "CTA remembers 9/11 - let us never forget."

In Chicago's suburbs, there were numerous memorial dedications and ceremonies marking the 10th anniversary of Sept. 11. In Westchester on Sunday night, sirens were silent and lights flashed as fire and police departments honored all the first responders who died on 9/11.

In Naperville, a ceremony held on Sunday honored the victims of 9/11, including Navy Cmdr. Dan Shanower. A Naperville native, Shanower was 40 years old when he was killed while at the Pentagon.

"If there's one thing I would like everyone to know, it is to think back on those hours, days and weeks immediately after 9/11 and the sense of national unity.There were no political parties that mattered. There was only the united states of america, and that is what we have to get back to," said retired Rear Adm. Rick Porterfield, Shanower's superior.

"The number of people here today, the number wearing red, white and blue, carrying flags -- it was a wonderful, wonderful tribute to everyone who died that day," said Paula Coleman, Shanower's sister.

Several suburbs use World Trade Center beams in 9/11 memorials
One dedication ceremony was under way late Sunday morning in suburban Carpentersville, where a new memorial at the fire station honors local firefighters and those who died in the terrorist attacks.

The ceremony began at 10 a.m., and one of the speakers was a survivor of the World Trade Center attacks in New York City one decade ago. Many more people gathered than there were chairs to seat them.

During the ceremony, the Carpentersville Fire Department planned to unveil its own 9/11 memorial that includes two of the smaller beams from the twin towers. Numerous similar beams have been given to fire departments nationwide. Approximately 9,000 communities applied for the beams, but only 1,200 received them. The stipulation was that they had to be used in the context of a memorial, and the one in Carpentersville was completed all with donations.

Carpentersville also put together what residents are calling a Healing Field near the site of Sunday's ceremony. It contains 2976 flags, one for each person who died on 9/11. Each flag has a name and a ribbon, red for firefighters, blue for police and yellow for civilians lost.

ABC7 spoke to the Carpentersville fire chief about his decision to apply for the beams.

"We were able to receive two, 5 ft. small beams, not the large beams. So, I sat down with a napkin and tried to think what I would do both for the 9/11 victims and the firefighters that served our community in the past, present and future," Chief John Schuldt said.

On either side of the beams are tablets. One of them contains the firefighters prayer that they say whenever they go into a fire and the second one contains the reading that is said at a firefighter's funeral.

A new 9/11 memorial was also unveiled in Des Plaines Sunday morning. Members of the Des Plaines fire and police departments took part in the ceremony at 8 a.m.

The new memorial features a 114-lbs. beam that was salvaged from the remnants of the World Trade Center.

The memorial is outside Des Plaines City Hall.

In Oak Lawn, the 9/11 First Responders Memorial was unveiled, and the sculpture was also built with beams from the World Trade Center. Oak Lawn firefighter Paul Henesy was sent to New York to help with firefighter funerals.

"September 11th brought this country together like I have never seen, and I don't want us to lose that. It seems that is exactly what is happening right now," Henesy said.

Also in Schererville, Ind., a steel beam from the World Trade Center was unveiled to the public during a memorial Sunday. The beam will eventually be incorporated into a permanent memorial.

A number of people touched the beam and took pictures. Town officials have said they are honored to have this piece of history.

The race, which began at 7 a.m., was organized to honor those who lost their lives on 9/11, as well as those who have died in the conflicts in Iraq and Afghanistan.

The Fort 2 Base Race gives those participants a chance to run in honor of a colleague killed in the line of duty in the terrorist attacks.

It also was part of the Great Lakes Naval Station's 100th anniversary celebration. 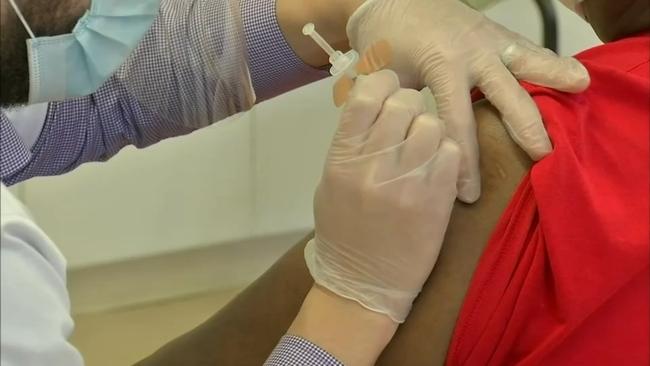