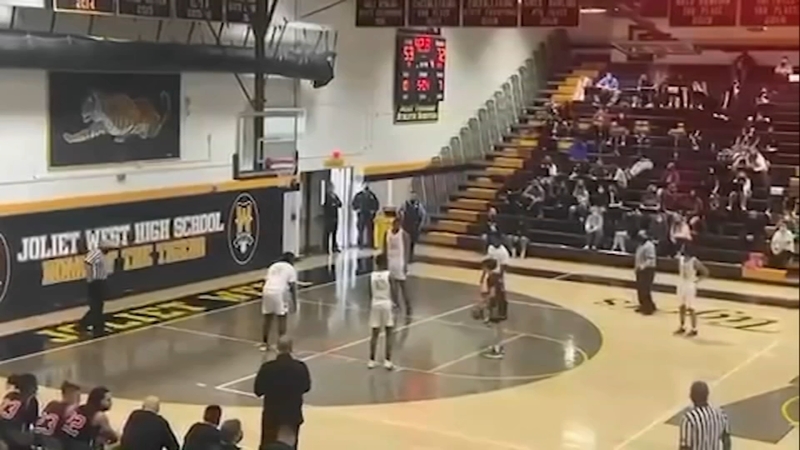 BOLINGBROOK, Ill. (WLS) -- Students are reeling after an anti-Asian racial slur was yelled during a basketball game between Bolingbrook and Joliet West high schools.

The slur was aimed at MJ Langit and his teammates.

"It definitely hurt," he said. "It made me feel, like, belittled."

Josh Aniceto heard a slur during his free throw attempt.

"I honestly just don't think anything about it because I'm the one playing and they're watching me, so I just really want to prove them wrong," he said.

"It's disheartening," said Joy Molano Vergara, parent. "It triggers memories for me, but also with family and close friends."

The person who yelled the slurs has been identified is not a student of Joliet West. Still, Joliet Township District 204 responded by banning the fan from all school events for the remainder of the year.

In a statement, the district said in part, "This behavior is not reflective of the values of Joliet West High School, our district, or the West basketball team, and we are deeply disturbed and embarrassed that this incident took place."

The Bolingbrook team and community hope this could be a teachable moment.

"What I want to come out of this is for hate of all races, not just Asians but all other races, to just come to an end," Langit said.

The school and community are already rallying together. When Bolingbrook hosts Homewood Flossmoor in another game Tuesday, all players, coaches and parents will wear shirts supporting stopping hate speech.

"It's definitely a special feeling because it's probably one of the first times I've ever had this much support for an incident like this because this isn't the first time this happened," said Langit.

The racial slur didn't slow Langit and his team down; they won the game.