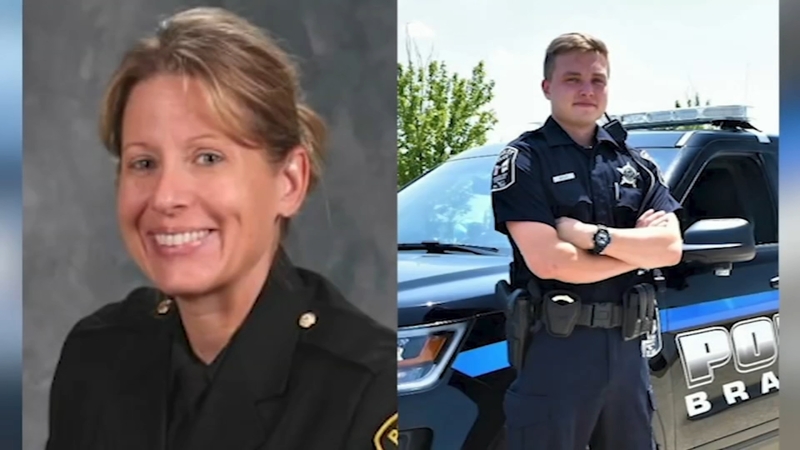 BRADLEY, Ill. (WLS) -- A suspect in the shooting that killed Bradley Police Sergeant Marlene Rittmanic and critically wounded her partner appeared in court Wednesday after being extradited from Indiana, officials said.

Darius Sullivan and Xandria Harris have both been charged with murder and attempted murder in the shooting last week.

Sullivan appeared in court in Kankakee Wednesday, where he was denied bail. He had been taken into custody in North Manchester, Indiana, where he was awaiting extradition.

Harris appeared in court on Monday where she was denied bail.

Bradley Police Chief Craig Anderson read a statement from the family of Officer Tyler Bailey, who remains in critical condition, but is slowly progressing.

"It will be a long and difficult battle for Tyler, we are elated with every small step forward," Anderson said.

The wife of Sgt. Rittmanic said in a statement, "Our world has been turned upside down, obliterated and hopelessly broken. Kankakee County has lost a leader in community policing."

"We are asking for the fullest extent of consequences for these individuals," Rowe said. "We want everyone held to account."

Police would not answer questions at Wednesday's press conference to explain what criteria needs to be met for the death penalty to be considered.

According to Rowe, 25-year-old Darius Sullivan first shot Officer Bailey when the two officers knocked on their door at the Comfort Inn the night of Dec. 29, then chased Rittmanic down the hallway of the hotel and shot her again.

Flags were flying at half-staff across the county Wednesday as the community continues to cope with the loss.

"It truly gives us hope that there is a chance for humanity win," Bradley Police Deputy Chief Craig Anderson said.

Funeral arrangements have been made for Sergeant Rittmanic, with services at at 10 a.m. Friday at Olivet Nazarene University in the Hawkins Centennial Chapel.