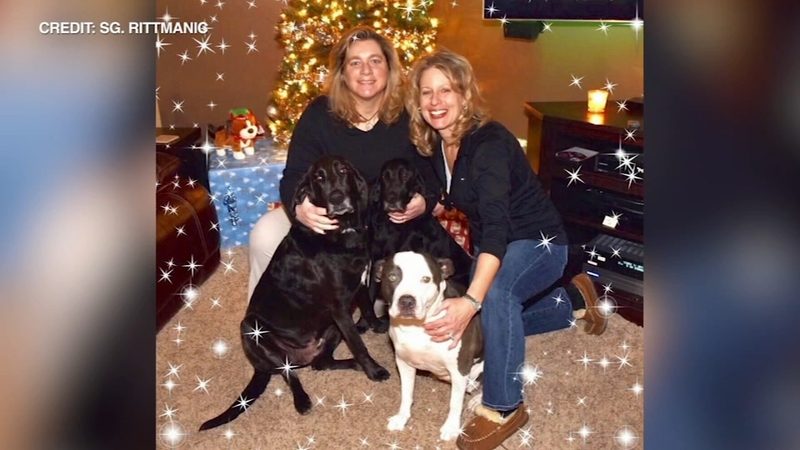 Rittmanic and her partner responded to a call Wednesday night of dogs barking in an unattended car in the parking lot at the Comfort Inn off of Route 50, the Kankakee County Sheriff's Office has said. They went to the hotel room where the car's owner was staying when police say the people inside the room began attacking the two officers, shooting them.

Rittmanic, 49, was killed and her partner Officer Tyler Bailey, 27, was critically wounded in a motel shooting last week.

Visitation for Rittmanic will be from 2 to 7 p.m. Thursday at Olivet Nazarene University in the Hawkins Centennial Chapel, according to her obituary.

A law enforcement procession will immediately follow. The public is encouraged to line the procession route to show support. Private interment will follow in Abraham Lincoln National Cemetery in Elwood.

Rittmanic is being remembered as "a leader in community policing."

Illinois State Police released a statement Monday morning on behalf her family and the Bradley Police Department, heralding her dedication to her work and thanking the community for their outpouring of support.

"Marlene believed in people and her ability to speak to the community with respect; meet them where they are in life; try to understand their true needs; and work together to find a solution that produced the least disruption in people's lives," the statement said. "To her - the job was about making her community safe for everyone, she believed - and stated, 'just because you can, doesn't mean you should.'"

Rittmanic was awarded Law Enforcement Officer of the Year in 2020, the ISP statement said.

"The community of Kankakee County came to a complete stop to stand in the cold to witness our hero, wife, mother, sister, daughter, aunt - Sergeant Marlene Rittmanic-Stua be transferred from Riverside to the Kankakee County Sheriff's Department and again from the Sheriff's Department to Clancy Funeral Home," the statement said. "We saw many familiar faces and complete strangers - We are more than grateful for you all and we know that you too are feeling the loss."

But the Bradley Police Department is also warning people of fake fundraisers claiming to be for Rittmanic.

In lieu of flowers, memorials in her honor may be made to the Marlene Rittmanic Memorial Fund at Federated Bank in Bradley. Memorials will be accepted at the services and the Clancy Gernon Funeral Home in Bourbonnais, which is assisting with arrangements.