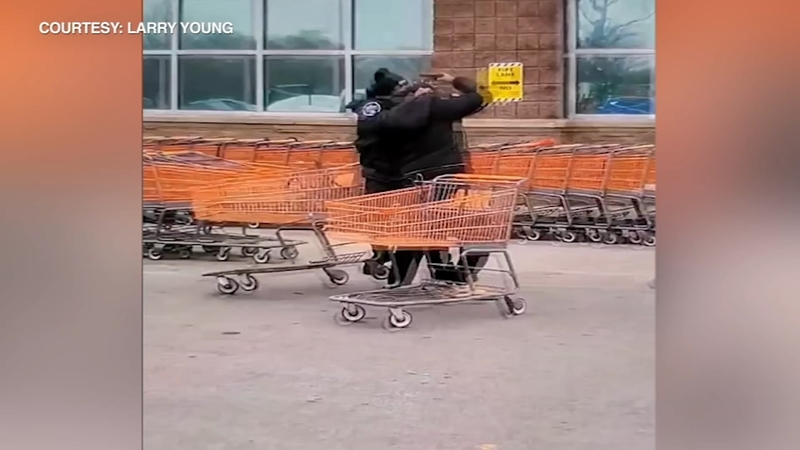 CHICAGO (WLS) -- A security guard shot Thursday while confronting an alleged shoplifter at the Home Depot in Brighton Park is in a coma, according to his family.

A Chicago police officer was also shot in the altercation, but has since been released from the hospital and returned home. The shoplifting suspect was killed.

CPD Superintendent David Brown said the officer was shot around 5 p.m. in the 2400-block of West 46th Street while chasing the suspect shortly after he shot the guard. The alleged gunman, who kept running after shooting the guard and police officer, was killed later in a shootout with other officers, police said.

The struggle was caught on cell phone video by a customer on his cell phone.

"I see four guys on one guy, when I seen them all on one guy I knew it was a shoplifter because I deal with it every day," said Larry Young, witness.

"They start backing off one by one, each guy starts backing off," Young said.

Except the store security guard. As the suspect breaks free he quickly pulls out a gun and fires. The camera jolts in obvious shock as the security guard collapses on the ground, bleeding.

The suspect retrieves his shoe and runs off.

"I thought either way they were going to hold him 'til the police came or something like," Young said. "I was never expecting him to turn around and shoot him in the head."

The guard was taken to the University of Chicago Medical Center with a gunshot wound to the head. Family identified him as Kevin Lockett and said he remains in critical condition, comatose.

A shooting at a Brighton Park has left a security guard in grave condition and his three daughtes are just praying he can pull through.

The 55-year-old father of three had emergency surgery Friday morning.

"He is in a coma state, responding to pain but not opening his eyes, not able to speak," said Arielle Lockett, daughter. "He had a lot of swelling to the head. They took him to surgery to see if they could remove the bullet. They got some of it, but there are fragments left."

The Lockett family heard about the police officer being shot, but had no idea their dad was also involved in the incident and had been rushed to the hospital. The last time they heard from him, he was on his way to work.

"He always tells us before he gets off his phone that he loves us, and I never knew that would be the last time I talked to him before that happened," said Adrielle Lockett, daughter.

The tight-knit family is now waiting to learn more about how the incident started. Lockett had worked at the Home Depot for six months without any issues.

"He is going to school to be a social worker at Chicago State. He was working in a factory and wanted something more laid back, so he said 'I will go into security,'" Arielle said.

The police officer was shot in the shoulder and was treated for non-life-threatening injuries at Mt. Sinai Hospital, Brown said. He was released from the hospital Thursday evening, flanked by a force of Chicago police officers, alert and at attention, as each saluted the injured officer.

No information has been released about the suspect who was killed.

At the scene of the shooting, officers blocked off a residential stretch of 46th Street between Western Avenue and Rockwell Street as residents congregated behind the police tape to catch a glimpse of the investigation and exchange rumors over the sound of helicopters.

In the last two weeks, three other Chicago cops have been wounded in shootings.

He noted that law enforcement officers across the country are "under attack," reflecting on the cop who was shot and killed responding to the recent mass shooting in Boulder, Colorado.

"I'm thankful for the police and everyone who did their job to bring this to a quick and swift end," Lopez said Friday.

He decried the violence.

"It's a neighborhood store, and any one of us could have been that victim yesterday," Lopez said. "Two people went to work yesterday thinking it was going to be just another day on the job, one's clinging for his life, as you said, and an officer who was gunned down trying to pursue the suspect. Nothing it that important to bring us to where we're at today."

Last Saturday, an officer was shot in her hand during a SWAT standoff in the Austin neighborhood by a man who allegedly wanted to "lure" cops to the area. On March 15, an off-duty officer was ambushed by two gunmen while stopped in traffic in the Calumet Heights neighborhood.

RELATED | Off-duty Chicago police officer ambushed, shot in Calumet Heights
And a day before that, an on-duty CPD sergeant was shot while standing in the parking lot of the Gresham District police station, at 7808 S. Halsted St. The bullet grazed his chin, and he was released from a hospital later that day.

Chicago's Civilian Office of Police Accountability is investigating the shooting. Anyone with information is urged to contact 312-746-3609 or visit chicagocopa.org.