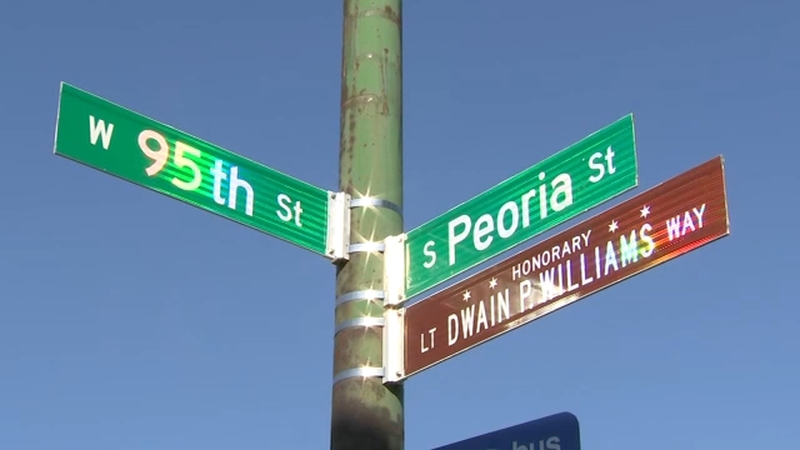 CHICAGO (WLS) -- A retired Chicago Fire Department lieutenant was honored Saturday, more than a year after he was fatally shot during an attempted carjacking on Chicago's South Side.

South Peoria and 95th streets in the Washington Heights neighborhood are now the site of Lt. Dwain P. Williams Way.

City leaders and firefighters stood beside Williams' family Saturday afternoon as the honorary sign was unveiled.

Its namesake is for a man who is remembered by his family as a talented musician and his work in trying to address gun violence in the city.

That same violence that claimed his life.

"Our patriarch, our rock, our hero, and our family soul was senselessly murdered," said Williams' nephew, Marlon Williams.

In December of 2020, surveillance video showed the moments the 65-year-old man was leaving out of a popcorn shop in Morgan Park when an armed group tried to approach him in an attempt to steal his car, according to police.

Gunfire was exchanged, and Williams was hit and later died.

Now, a little more than a year later four people, including a teenage boy, are charged in his shooting death.

His family said they are happy his legacy is now erected for all to see.

"You may see his name in some readable text, you should remember who he was - a man of God, a warrior for justice," said Willams' widow, Karen Williams.