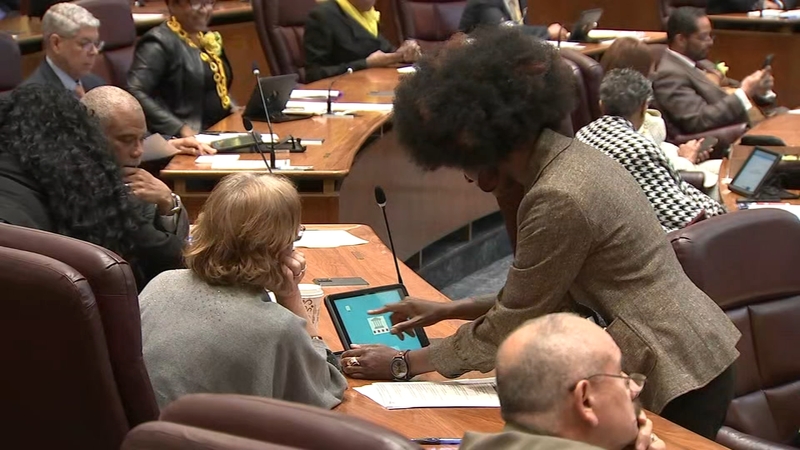 CHICAGO (WLS) -- The Chicago City Council moving into the 21st Century Wednesday, with a few speed bumps on day one of electronic voting.

"Council will come to order, please use the pad to log your presence," Mayor Lori Lightfoot said as the council debuted electronic voting.

"It actually went fine," said Ald. Sue Sadlowski Garza, 10th Ward. "There was a few glitches but I think, welcome to the age of electronics. I think it's about time that we brought City Council up to speed."

As the first actual vote took place in the afternoon, the tally board lit up with green "yes" votes.

"A couple of us had technical difficulties because the network wouldn't connect," said Ald. Walter Burnett, 27th Ward.

City Clerk Anna Valencia, who oversaw the implementation of the new systems, thanked aldermen for their patience.

"Today was history in the making," she said. "And we're excited over the next few months for the aldermen to get used to this new procedure and e-voting."

Earlier, some alderman called for ethics reforms after Valencia and her lobbyist husband, who does business with the city, failed to properly report their statements of economic interest.

"So the fundamental issue right here is that public office should not be used for pushing back the public office for personal gain," Ald. Silvana Tabares, 23rd Ward. "We're here to serve the public."

Valencia accused Tabares of being a tool of her opponent Alexi Giannoulias in the Secretary of State race.

"I have talked to the board of ethics and everything that I need to amend, I have amended as soon as I found out that we had made a mistake, a human error," Valencia said.

The mayor took heat from aldermen about the process to choose a casino finalist after she introduced an ordinance to establish a special committee of committee chairs and vice-chairs to advise her on the best choice.

"Every single member of city council will have more than ample opportunity to participate obviously, in a public engagement," Lightfoot said.