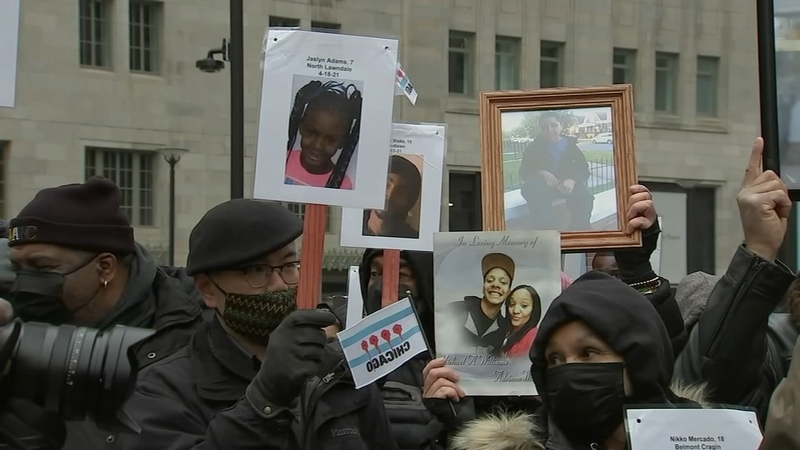 "You see us carrying pictures, pictures of more than 79 victims who were 18 or younger," said Father Michael Pfleger of St. Sabina Church. "I know of two young people who have been shot in the last 20 hours."

Pfleger, who helped organized the March for Remembrance and Peace, said they chose downtown for the demonstration because violence isn't just a South Side and West Side issue; it's a Chicago problem. He said everyone should be up in arms about the gun violence epidemic.

According to Chicago Police Department data, there have been at least 794 homicides in 2021, the highest number since 1995. Black people account for the overwhelming majority of the victims.

"Our children are becoming an endangered species and our children deserve the right to live," Pfleger said.

Superintendent David Brown described 2021 as a challenging year at a press conference on the city's crime numbers Thursday. Brown promised more detectives to solve murders and more officer engagement with the community.

Reverend Jesse Jackson said more needs to be done to get the people responsible for the killings off the streets.

"We must turn in killers. We must not be a sanctuary for killers," Jackson said before marching with the demonstrators.

"So are we not as concerned about the epidemic of violence because it mostly Black and Brown being killed. That's no longer acceptable. If you want the city to do well, take care of all the city," he said.

Those who have been impacted by the violence say everyone must work together to prevent another deadly year.

"We have to make a change and it starts with our communities but it also starts with detectives," said Tenika Blackman, who is one of countless Chicago mothers who have lost a child to gun violence.

Teyonna Lofton survived a shooting last year that happened while she was celebrating her high school graduation.