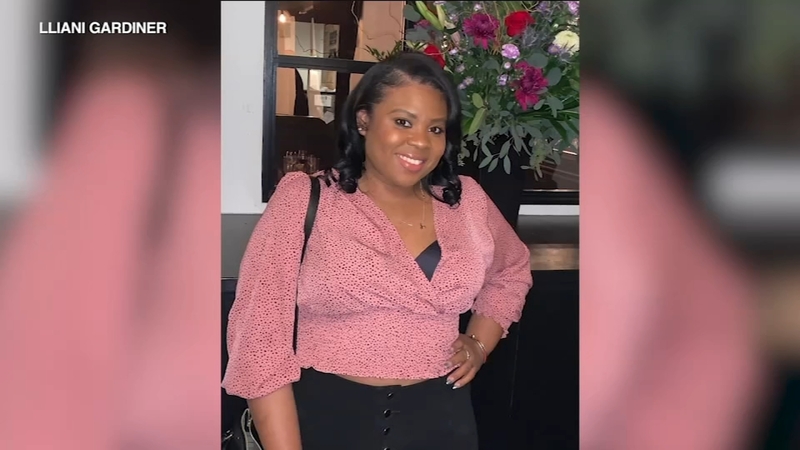 EVANSTON, Ill. (WLS) -- Family has identified the woman killed in a hit-and-run after a nearby shooting Sunday morning in North Center on the North Side.

Janelle Gardiner was 37-years-old, but she was so much more than that, her family said. She was a daughter, a sister, an aunt, a cousin, and while not a mother herself, a second mother to a 10-year-old.

And on Monday, her grieving family shared her story from the Evanston home in which she was born and raised.

"Everyone goes through their period of finding themselves. And Janelle went through that. But in doing that she found herself by also loving on other people. So she was in her true happy place," Gardiner's cousin Paula Peters said.

A happy place which, Saturday night, included going to an Arlo Parks concert with her sister and others. The life of the party that night, Gardiner was headed home around 3 a.m. when a grey Toyota Camry slammed into the Nissan Rogue in which she was a passenger near Irving Park Road and Western Avenue, throwing her from the vehicle and killing her.

"She was taken from us too soon," said her sister Lliani Gardiner. "I love her so much. She deserved so much more from this life."

Chicago police said the Camry was involved in a rolling shootout in the moments before the crash.

"Our family lost a true angel," said Peters. "She was the backbone to us, a role model to my daughter. She was our rock."

"Janelle was amazing," said her mother Karen Gardiner. "She was so loved, and she loved everybody the same way."

"That night she shined so bright. She was just on her way home. We were meeting at her house and we rode in separate cars," Lliani Gardiner said. "I never thought that when she got in the car it would be my last time seeing her. But she was happy, and I have to find peace in that."

Investigators said the people inside the Camry fled on foot. And while Gardiner's family tries to find peace with what happened, they also want those responsible for her death brought to justice.

"Please step up and do the right thing for our family. That's all that we ask," her brother Charles Gardiner said.

"I want my little grandchildren to be able to enjoy Chicago the way my children grew," Karen Gardiner said.

Police said Monday no arrests have been made. The investigation is still ongoing.