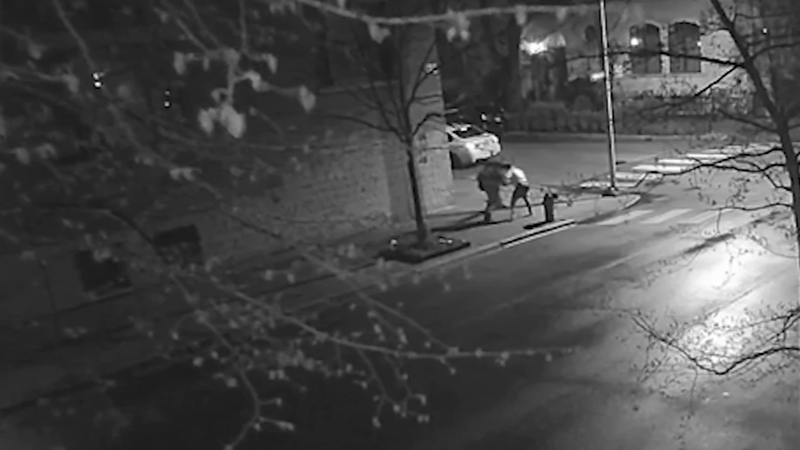 CHICAGO (WLS) -- A 19-year-old Oak Park man has been charged in a violent robbery and shooting in the Lincoln Park neighborhood that left a 23-year-old man fighting for his life.

WATCH: 'We will not tolerate violence': Police announce charges in Lincoln Park shooting

But before that, he, himself was shot four days after Earley's shooting near "The Bean" sculpture. He escaped from a hospital before being arrested at his home over the weekend.

The day after the attack, detectives began going through the video and were able to identify Brownlee as a suspect, Chief of Detectives Brendan Deenihan said. Then on May 10, Brownlee was wounded near "The Bean" sculpture in Millennium Park and was taken to Stroger Hospital.

By the time detectives in the case realized Brownlee was at Stroger, he was already gone, "probably understanding what was happening," Deenihan said.

Brown stressed the importance of private security cameras, noting that footage of the shooting helped lead to the arrest.

"They help us solve crimes faster," Brown said. "But more importantly, they help us bring violent offenders off our streets to justice.

"We will not tolerate violence in this city," the superintendent added. "Too many precious lives are being hurt or taken away because of a sheer disregard for human life, and that is unacceptable."

Brownlee also faces armed robbery charges in connection with incidents on May 5 and 6:

Brownlee appeared in court Tuesday, where bond was denied. In court, prosecutors said an earlier victim's wallet was found where Earley was shot at Webster and Wayne. Police said Brownlee confessed to his crimes, and that after arresting him they recovered clothing similar to what is seen on various surveillance video, as well as a .9mm handgun, the same caliber used to shoot Earley.

Chicago police believe Brownlee has also been involved with a robbery crew that is responsible for an extensive pattern of armed robberies over the previous two weeks, across Lincoln Park, Lakeview, Edgewater and Uptown, 2nd Ward Alderman Brian Hopkins said.

In those attacks, suspects wearing ski masks were driving stolen cars around residential neighborhoods in the overnight hours, looking for unsuspecting people walking alone or in small groups.

They would then jump suddenly from the vehicle with guns drawn to rob their victims of phones, purses and wallets.

Deenihan noted that robbery crews in Chicago often "become more violent as they go along," though he couldn't say exactly why Earley was shot when the other victims were not.

"And so I can't tell you specifically is that the reason. You know, obviously, the victim in this case, you know, fought back ... You guys can see on the video, his initial instincts are to fight back and then immediately it leads to the shooting," he said.

Brown said Tuesday these are Brownlee's first adult charges; Cook County State's Attorney Kim Foxx confirmed he only had two misdemeanor arrests as a juvenile, marking a quick escalation in a young offender.

"We have five innocent victims and a community that has been terrorized," Foxx said.

Earley's shooting was caught on surveillance video. The recent culinary school graduate could be seen walking near Wayne and Webster avenues when he was approached by an armed robber.

They were seen engaging in a brief struggle before Earley was shot three times as the robber continued to demand Earley disclose his cell phone's passcode.

On Friday, Earley's brother posted an update on GoFundMe, saying Dakotah is no longer on life support.

Over the weekend, Earley's leg was amputated below the knee due to injuries he suffered in the shooting. He has also undergone jaw surgery, and is currently unable to speak.

On Tuesday morning, his mother was flying from Atlanta, where she lives, back to Chicago. She said her son is in good spirits. He is now breathing on his own.

She said she was happy to hear that police have a suspect in custody for her son's shooting.

"I'm glad that they have a suspect. I hope that it's that person, and I hope, I mean, if it's a crew, then I hope they get the rest of them," Joy Dobbs said.

And Tuesday night, after telling her son the good news, she said he echoed the sentiment.

It's been very difficult for Dobbs to watch her 23-year-old son fight for his life in the hospital.

"Nobody should have to go through this. And especially for the world to see," she said. "I just remember screaming ... because I knew it was him just walking down the street, like I know how he walks. And just to hear him screaming, and I couldn't do anything, I just lost control."

But, he's improving every day.

"He's a fighter, he's resilient and I'm just so proud of him," Dobbs said.