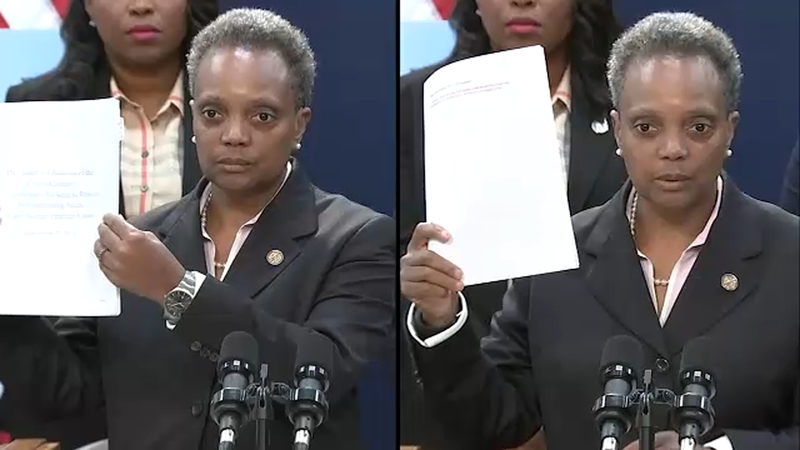 CHICAGO (WLS) -- Mayor Lori Lightfoot stepped up the pressure on the Chicago Teachers Union as negotiations appeared to be going nowhere Monday morning.

The union set a strike date of October 17, and with just 10 days until teachers plan to walk off the job, the mayor accused them of not having any sense of urgency to get a deal done.

The teachers union said it was trying not to get involved in a he-said-she said situation, but then did after the mayor and CPS put them on the spot about negotiating in good faith.

Lightfoot and her CPS leadership team suggested this morning that the Chicago Teachers Union may want a strike more than a new contract.

"Recently, instead of meeting us at the bargaining table to solve problems our counterparts have focus their energy on preparing for a strike rather than avoiding one. We can't bargain alone," said Lightfoot.

RELATED: 2019 CTU Strike: What teachers are fighting for

The mayor contrasted the 50-page detailed offer CPS has given to the teachers with the five pages she said her team has gotten back in writing from the union during her 141 days in office.

"I am concerned that CTU leader ship is not exhibiting this sense of urgency needed to move these negotiations forward in a substantive way," Lightfoot said.

The union accused the mayor of being misleading.

"The reality is with the change in administration's CPS didn't get down to serious negotiations until August of this year, so we've been working on a very compressed timeline," said Robert Bloch, CTU General Counsel.

Monday CTU President Jesse Sharkey said he was trying to stay out of the public back and forth.

"The CTU comes to the bargaining table with dozens of members and representing the concerns of people all across all of our schools and we're going to try to take the voices of those folks and lift them up today," Sharkey said.

Concerns about class size and support staff salaries have stalled negotiations. The union said CPS has the money to fix the problems. The president of the Board of Education said their offer presented to teachers is responsible, but can't meet all their demands.

"It will not put CPS back into the financial trouble it was just a few years ago, it does not make promises CPS can't keep," said Miguel del Valle, president of the Chicago Board of Education.