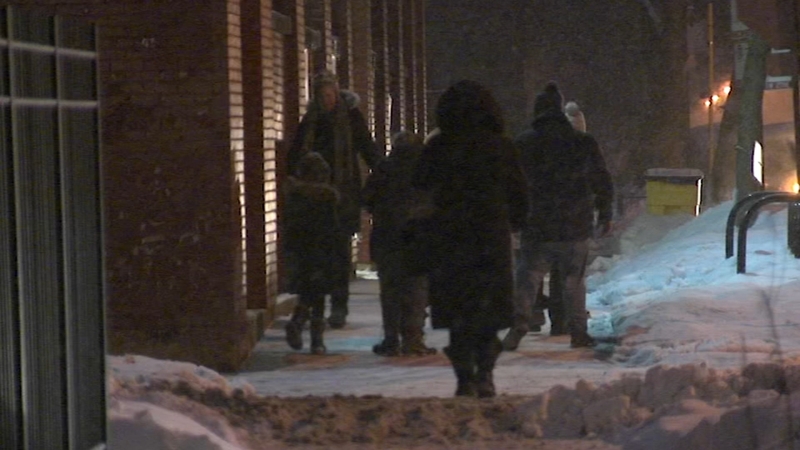 CHICAGO (WLS) -- The Chicago area is bracing for historically cold temperatures on the heels of a major winter storm that dumped several inches of snow across the Chicago area Monday.

A Wind Chill Advisory goes into effect for Northern Illinois and Northwest Indiana from 4 a.m. to 6 p.m. Tuesday. A Wind Chill Warning goes into effect at 6 p.m. Tuesday through 12 p.m. Thursday. Wednesday's expected high is well below zero, and wind chills will make it feel like as much as 50 degrees below. It has the potential to be the second-coldest day in the history of Chicago.

The Chicago area is bracing for historically cold temperatures on the heels of a major winter storm that dumped several inches of snow across the Chicago area Monday.

Chicago Public Schools announced they will close schools Wednesday due to the cold. The temperatures could present a hazard for children traveling to and from school, CPS said. CPS buildings will also be closed Wednesday due to the weather and all after school activities are canceled.

CPS schools will be open Tuesday. The district will make a decision about classes Thursday on Wednesday afternoon.

Niles Township High School District 219 will also close schools on Wednesday, and will hold classes Tuesday. All after school activities at Niles North, Niles West and Niles Central will are canceled Tuesday and Wednesday. They will decide later whether schools will reopen Thursday.

The Federal Aviation Administration said some flights arriving at O'Hare were delayed an average of 5 hours and 19 minutes due to a traffic management program put in place as a response to the snow, ice and weather.

Dozens of warming shelters in the city and throughout Cook County have been opened as an additional safety precaution. Officials say everyone should limit their outdoor exposure over the next few days.

RELATED: Find a Chicago area warming center near you

The city has also added warming buses on the streets to encourage the city's most vulnerable to be safe.

"Check on the well-being of other residents, friends, and neighbors, especially seniors and people with disabilities," said OEMC Acting Executive Director Rich Guidice.

Sam Franke, a furnace repairman for Four Seasons, has been working 15-hour days ahead of the extreme cold.

"When you get down to negative-20, the homes in Chicago are not really meant, they're not built for that type of weather," he said.

To keep your home as warm as possible, Franke recommends you replace your furnace filter and keep vents clear, lower blinds and close drapes, and tonight, before going to bed, raise the temperatures a few degrees to offset the inevitable loss of heat.

If you have a high-efficiency furnace, clear the intake and exhaust of snow and ice. It can pose a carbon monoxide risk.

"If the system keeps turning on and off, on and off, just go outside and check and make sure that's clear," said Franke.

Starting Monday night residents should trickle their faucets. If your pipes freeze never thaw them with an open flame. Instead, use a hair dryer.

And overall, know your limits. In temperatures this cold frostbite and hypothermia can happen in minutes.

"Don't be a tough guy and try to go outside and do stuff during this weather. This is not the time for home improvement projects outside," said Dr. Laura McIntyre, Northwestern Immediate Care.

The South Shore Line said trains would operate on a reduced scheduled Wednesday and Thursday due to the extreme weather. They will also bus passengers from South Bend to Michigan City from Tuesday through Friday morning. Click here for more information and to view the modified schedule.

Northwestern University will be closed from 8 p.m. Tuesday to 12 p.m. Thursday due to the extreme cold. The university will continue to provide "essential services" including policing, facilities management and residence hall dining.

Columbia College Chicago announced it will close Tuesday evening through Wednesday due to the weather. The closure begins at 6 p.m. Tuesday through all of Wednesday and applies to all academic and business operations of the campus.

The Lincoln Park Zoo will close early Tuesday, at 3 p.m., and remain closed Wednesday for the safety of animals and visitors, except for several species acclimated to the climate, like polar bears.

In the city, 3.1 inches of snow fell at O'Hare International Airport and 2.9 inches fell at Midway Airport. In the southern suburbs, Oak Lawn got 4 inches and Homewood got 3 inches of snow.

Between 3 and 8 inches of snow fell throughout the area, ending by late Morning. Higher snow totals were recorded in the northern suburbs close to the Wisconsin border, including in McHenry (8 inches), Gurnee (7 inches), Algonquin (6 inches), Arlington Heights (5 inches) and Fox Lake (5 inches). In the western suburbs, Romeoville got 4.9 inches of snow and Aurora got 5 inches.

On the heels of the snowstorm comes potentially historic cold as the polar vortex continues to bear down on the area.

TAKE PRECAUTIONS FOR, IN YOUR CAR FOR EXTREME COLD
EMBED More News Videos

Your car can be your oasis in the extreme cold, but you must take precautions and be prepared.

Your car is your oasis when it comes to dealing with record-breaking cold, and you should be prepared to keep it running and to take shelter in it if needed during the freezing days ahead.

"We sell a lot of batteries, we sell a lot of deicer for the windshield wipers, salt for the driveway," said Frank Wilson, employee at AutoZone in the city's North Center neighborhood. "We sell a lot of fuel supplements to actually put in the fuel to keep the fuel from freezing."

AAA said its roadside assistance call volume for Illinois is up 81 percent over this time last year, and 100 percent for Indiana. Drivers should keep an emergency kit in their car for roadside emergencies during extreme weather.
AAA recommends packing: a flashlight, a blanket, a cell phone charger, safety triangles, a snow brush, jumper cables, and water.

At Ashland Tire, owner Jack Gordon has helped Chicagoans through 30 winters. He said passenger vehicles have become far more reliable in that time, but people must think ahead and maintain their own tires. He said the most common thing people forget is probably making sure they have good air pressure in their tires.

Good tires coupled with proper defensive driving will do more to keep you out of the body shop in winter than just about anything.

Clear the snow from your roofs and shovel those sidewalks; preparation before the extreme cold sets in can make all the difference.

It may not be the best weather to be climbing a ladder, getting on a roof and scraping snow away, but having a professional do it could prevent major water leakage problems in your house, especially when the deep freeze sets in.

"It causes blockage, so that water goes into the house," Chuck Neuhaus of Hanson Roofing explained.

Roofers said as long as the snow and ice stay frozen you shouldn't have a problem; the issue is that when it warms up and it melts, the water has to go somewhere.

Residents also got a good workout shoveling snow from their driveways, and plow drivers in Glencoe got in some overtime Monday. The LeMonds family, who are experiencing their first Chicago winter, said they're glad they have snowblower.

In the city, the day got off to a slow start thanks to the blanket of snow. Some residents found that even though they were prepared for their commute, they didn't get very far.

"We start driving and then we turn around because traffic was not moving," said Elbis Uruchima.

So Uruchima returned to his Portage Park home and started shoveling instead of taking his son Adam to school. The 11-year-old has enjoyed his unexpected snow day.

"He says he's helping but he's just playing with the dog," his father said with a laugh.

Some got unexpected snow days and most Chicago residents scrambled to shovel snow before extreme cold sets in Tuesday night.

Amy Kruska spent 10 minutes bundling up her young kids to get them outside to avoid cabin fever.

"They do get a little stir crazy and start bouncing off the walls and the couches and the beds, and all that," she said.

RELATED: What to do with your kids when it's too cold to go outside
By mid-morning the snow had moved out of the city, leaving residents so clean off sidewalks, front walks and cars. And the age-old tradition of dibs - people claiming the parking spots they've dug out on Chicago's side street, appeared again.

"It's a one-way, you got graded streets where it turns to ice and you can't get out because everyone doesn't have an SUV, so it's a whole lot of problems," he said.

The snow began falling Sunday night and moderate snow persisted until about 9 a.m. Light snow is expected to continue in the afternoon and winds are also creating blowing and drifting snow, reducing visibility.

The snow made for a messy commute across the area Monday. The ABC7 Stormtracker checked out conditions on Lake Shore Drive Monday morning, where the roadway was covered in snow, as was the outbound Eisenhower Expressway.

The Chicago Department of Streets and Sanitation deployed 287 snow vehicles to clear the city's streets, focusing on the city's arterial streets and Lake Shore Drive before transitioning to side streets when the snow stops.

Some drive times soared on the Kennedy into downtown at an hour and 40 minutes. In the city, salt trucks struggled to keep up since the snow kept coming down. Commuters were forced to take it slow.

"I was going real slow like 5 or 10 miles an hour," said commuter Tyreece Woods. "Both hands on the steering wheel just making sure you know what I'm saying just being careful."
According to CTA, during conditions like this, track switch heaters are turned on to keep them from freezing and to keep trains moving at a consistent pace.

The city's buses are equipped with engine pre-heaters so that they can be started up quickly and to keep commuters warm.

The Illinois Tollway reminded drivers who need help that they can call *999 for motorist assistance. Stranded motorists should turn on their emergency lights and remain in their vehicles until help arrives.

When there is snow and extreme cold the Tollway recommends that you have your cellphone fully charged before heading out, be sure tires are properly inflated, keep your gas tank at least half full to avoid gas line freeze-up and keep a cold weather safety kit in your car with items such as a flare, a blanket and flashlight.

ABC7 meteorologist Larry Mowry explains how the Polar Vortex is responsible for the bitter cold in late January and February.

SNOW IN THE SUBURBS

"We have to pick them up," said Palatine Township Pace driver Tracy Sypura. "No ifs, ands or buts. This is a life-threatening situation."

Rosemary Monsen, 84, relies on that ride. She has to get to her dialysis appointment no matter what the conditions look like.

The transportation system is just one way Palatine Township helps their residents out when the winter weather hits.

"We strive to stay open we have services crucial for individuals," said Palatine Township Assistant Administrator Anna Chychula. "We have a food pantry on Monday."

The Palatine Township Food Pantry helps residents stock up on supplies, making sure they have what they need at home before the record breaking cold sets in