Chicago Public Schools closed Friday; Lightfoot hopeful for deal with CTU in 'next day or so' 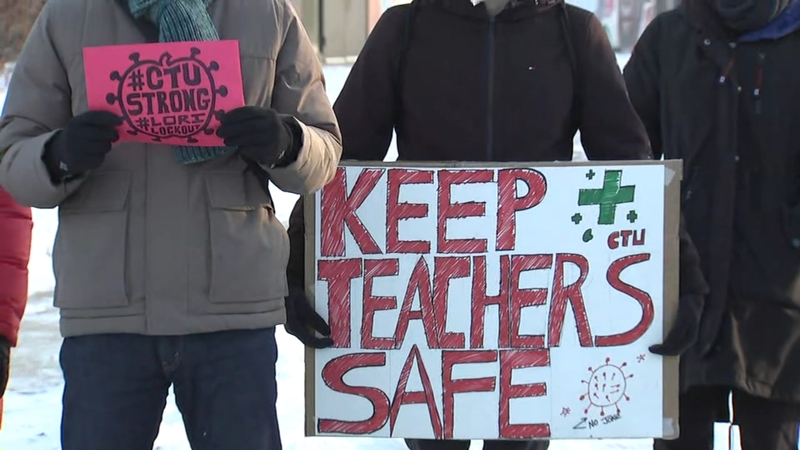 CHICAGO (WLS) -- For the third day in a row, Chicago Public Students were not in class Friday. But Mayor Lori Lightfoot expressed optimism that a deal can be worked out with the Chicago Teachers Union to reopen schools.

Both sides said they're committed to being at the bargaining table all weekend. CPS says it will have more to say about the status of Monday's classes, but already many principals are telling students not to show up on Monday.

In a joint statement Friday evening, Lightfoot and Martinez said: "Bargaining sessions continued today and went into the evening. The sessions remain productive but must be concluded this weekend."

A spokesperson for Chicago Public Schools then released a statement that said: "CPS is committed to working toward an agreement with the Chicago Teachers Union throughout the weekend, and we are dedicated to working day and night so we can get our students back to school next week, hopefully on Monday. We know families need to plan ahead and we will be sending additional communication over the weekend with a status update regarding classes on Monday."

Seven CPS families with students at 10 schools filed a lawsuit Friday against CTU accusing them of an illegal work stoppage.

Teachers are demanding all students and staff be tested as a condition to return to their buildings before the January 18 date agreed to in their vote earlier this week. The CTU has accused Mayor Lightfoot of refusing the state's help with saliva testing.

IDPH said it made the offer over the summer, but CPS says it instead awarded a testing contract to a private vendor.

On CNN Friday night, Lightfoot said talks on the testing issue have yielded progress, and she is still ruling out a district-wide move to remote learning.

"There's no reason why we can't get a deal done this weekend and get our kids back in school, but there's got to be goodwill on both sides," Lightfoot said.

"Well, my hope is that we're going to get a deal struck here in the next day or so," Lightfoot said. "It gets our kids back in school in person learning in a deal that covers the duration of the school year and we don't have any additional disruptions."

Also on Friday, seven CPS families with students at 10 schools filed a lawsuit against CTU accusing them of an illegal work stoppage. Some of those parents are unable to work from home, and some have children with special needs. Their attorney is seeking an injunction to force the teachers back into the schools, calling their job action illegal.

"CTU can't unilaterally act when it comes to what they think is safe and not safe for our children for their well-being," said Jeffrey Schwab, plaintiffs' attorney. "That's a decision that does include their input, but it also includes the input of parents and other staff and principals."

One of those parents, Laurel Golden of Jefferson Park, has three sons in three CPS schools that are now making three different decisions about being open or closed.

"Extreme frustration," he said. "I mean, this is something they should have been figuring out a month ago already. Everybody is talking about what's best for them, but nobody is bothering to ask necessarily the parents or the kids. We want them in school."

Teachers also say they want to be in school. The union denied that anyone has stopped working, and characterized this as a lockout.

"Our teachers, our parents, our students, we all want to be safe in school," CTU organizer Linda Perales said. "The mayor can make that happen by stepping up and meeting out demands and ensuring safety."

Meanwhile, parents and students are hoping that the negotiators reach a deal soon to get kids safely back in school.

At Morgan Park High School, students were coming in, not for classes, but instead to pick up care packages with essentials, including Chromebooks in case students can't return to schools and have to resume e-learning.

"My hope is that we actually go back to school, so they're just giving us this little care package, just to say that they actually care about our health and that they care about our safety, too," Morgan Park student Markel Chaplain said.

When asked if she had any confidence kids would be back in school on Monday, Morgan Park parent Dee Stallion said, "I doubt it. If they're giving us a Chromebook it's no school on Monday. It's school at home."

While most schools remained closed, at Mt. Greenwood Elementary, the principal opened the school for parents who needed a safe haven for their children due to work or other schedule conflicts.

Katie Rondeau stopped by to get material for her second grader and was grateful she and her husband work opposite shifts and can manage the situation.

"I wish they would have figured this out before the kids went back to school," Rondeau said. "They had two weeks of a break to figure this out and they waited till we were back in school for two days and then waited until midnight so that parents didn't know what the deal was."

And she's not alone. An online petition with more than 3,000 signatures is pushing for CPS to return to in-person learning and not go remote.

A group of 25 state lawmakers also entered the fray, signing a letter calling for more robust testing and high-quality masks for a safe return to in-person learning and calling for a pause to remote learning until that can happen.

"We continue to advocate and press upon Chicago Public Schools to work with us as we are trying to figure out the differentiated approach to how we address this," said State Sen. Cristina Pacione-Zayas, D-Chicago.

Lane Tech allowed students to come to the building for a short time for activities.

The principal sent out a note to families preparing them for next week too, saying the high school will be open for in-person activities Monday, Wednesday and Friday for tutoring, gym opportunities and even board games.

CTU argues with COVID cases on the rise, keeping kids and staff inside school buildings is not safe.

"When we came to school this Monday, I saw five times the number of students in quarantine," said CPS teacher Jackson Potter. "We saw staff members getting ill, we saw lower attendance. This wave was already making a large impact, and we weren't ready for it."

As for parents, some said they understand the frustration felt by teachers, but they just want their kids back in class.

"It stinks to be at home," said CPS parent Doug Davis. "It stinks to be remote. I don't really want them to be remote, my son went thru that last year as a freshman. It was a hard experience. Luckily he had sports but I think for a lot of kids, it's really, really, tough and just going into school is great but I want them to really be learning things."