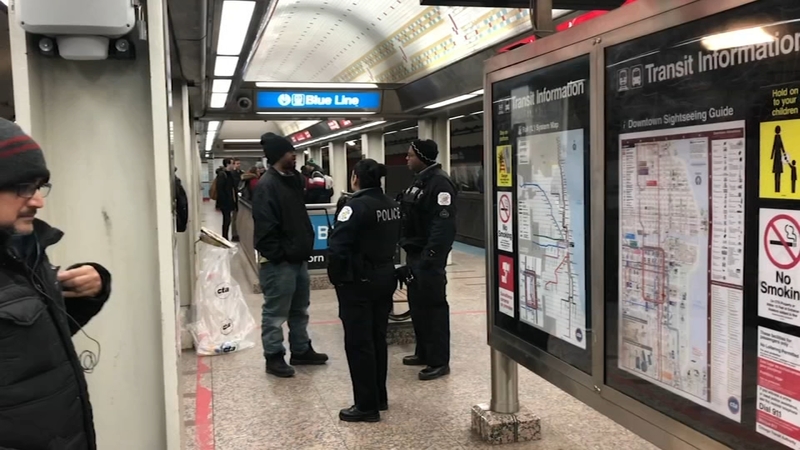 CHICAGO (WLS) -- New data showed violent crime on CTA trains is up 17% so far this year compared to last year, and Chicago officials are responding.

The CTA said it is increasing security to help combat the rash of crimes, but the recent violence has many riders on edge.

"Every time I come, I'm afraid there is always something going on whether it's in the morning or evening," said commuter Rose White.

Just Tuesday night, a man was shot on a CTA Red Line train near 63rd Street after police said the 25-year old was involved in an argument with four people. One of them pulled out a gun and began shooting. The victim was shot in the stomach and was taken to the hospital in critical condition. Red Line service was temporarily suspended between Roosevelt Road and 95th Street.

In response, the CTA announced it will double the number of unarmed security guards on the Red and Blue line trains, the two busiest rail lines, during key hours of operation to try to combat crime.

Though they won't have arrest powers, the guards can contact CPD quickly.

"To our CTA riders, I want you to know that we are aware of how some of your riding experiences have changed," Carter said.

Jerad Kluting said he was attacked on a CTA Red Line train near Fullerton Avenue over the weekend and was left with a concussion and two broken ribs. He was coming home from his own birthday celebration.

"The guy looked at me, targeted me, said a choice of homophobic slurs," he recalled. "And then he got extremely close in my face and looked at me straight in the eye, and I just looked at him and I said, 'There's cameras all over.' And then he took a shot and I went down."

Brown said officers will be divided into teams that will focus on gang and narcotics crimes on the transit system, as well as patrolling the busy rail lines. CPD said it is adjusting resources from the Bureau of Counterterrorism to better address shifts in crime patterns. CTA will also expand its use of contracted security guards.

"Though we are proud to have one of the best transit systems in the country, that reputation and everything we're doing to keep it will mean nothing if CTA customers don't feel safe taking public transportation," Lightfoot said. "Violence on our transit system must end, as people shouldn't have to fear for their lives when they're commuting around our city. This partnership between CTA and CPD will help to protect them and contribute greatly to our citywide mission to create a safer Chicago."

Earlier Wednesday, the Chicago Transit Board approved two new contracts for unarmed private security guards, which have been part of CTA's daily operations for more than two decades. The new CTA security guards will now be deployed seven days a week with expanded coverage during evenings, overnights, and on weekends, Carter said.

CTA security guards will focus on enforcing CTA's Rules of Conduct, which prohibit activity such as smoking, taking up more than one seat, playing loud music, or harassing and bullying other customers. The guards will also have conflict resolution and deescalation training.

"The expansion of security guards on trains and buses, and in stations, is just one part of our ongoing, comprehensive efforts to provide the most comfortable, safest commuting experience for customers," said Carter. "Having a visible presence of guards is an important deterrent to misbehavior and also helps demonstrate our commitment to addressing our riders' concerns."

"A safe CTA is an integral part of building a safer Chicago," said Brown. "This collaboration between the Chicago Police Department and CTA demonstrates to all residents that we're making every effort and using every resource. Whether residents are headed to work or school, a sporting event or the museum, every rider should feel safe."

Those that frequent trains knew something needed to be done.

"Me and my friends talked about it because we've heard this and we feel better because maybe there will be more security around, just people paying attention to what's going on, and hopefully that reduces it and makes us feel safer moving on," said Alana Faulds, another commuter. "Yeah, I guess I feel good about that. I don't know what it will actually look like. I hope it actually helps."

CTA officials said they believe the added security guards could act as a deterrent and some riders agree.

"Right now, they don't have any security, but with adding some and even more, it would deter some people some of these young guys thinking its easy pickings or whatever. It would help it out a lot," said commuter Nathan Bell.

CTA officials said they are also working to expand partnerships with social service agencies to help with issues of homelessness to provide support.