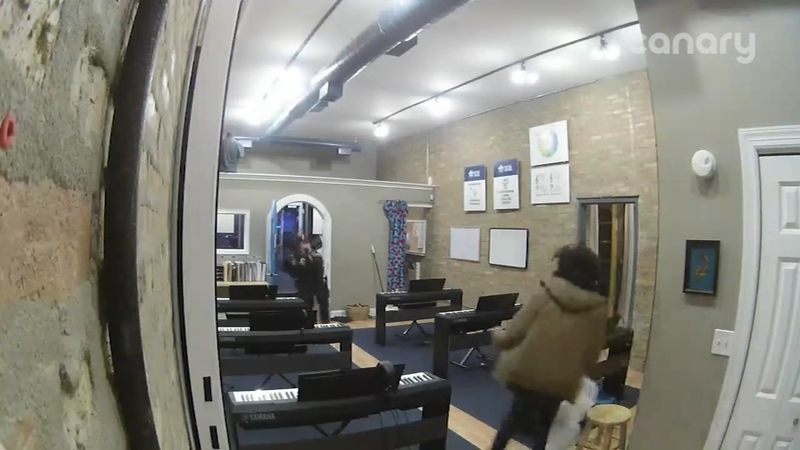 DES PLAINES, Ill. (WLS) -- More than a year after a bank robbery in the suburbs led to a police chase and deadly shootout inside a Chicago music store, there are new questions about what happened.

Those questions come from the Des Plaines police chief. Officers from his department were involved in the pursuit that ended with the robbery suspect dead and a teenager shot and wounded inside the music store.

Chief David Anderson believes the public didn't get the full scope of what happened that day. He said, based off surveillance video, it is possible one of the alleged robbers may have shot the teenager.

In November 2019, a then-15-year-old Rylan Wilder was shot during a confrontation between a Des Plaines police officer and an alleged armed bank robber at a Chicago music school.

Now that the Des Plaines Police Department has had more time to review the evidence, the chief says there is some doubt as to who shot Wilder.

"There's a possibility that offender may have also contributed to the young man's injuries," Anderson said.

Wilder's shooting came after a Des Plaines armed bank robbery. One of the suspects was arrested near the bank, but police say the other suspect, Christopher Willis, carjacked a vehicle and led police on a chase into the city where he shot a Chicago police officer in the head before running into an Irving Park music store. The officer survived.

"What led our officer into that store was trying to stop that armed offender who had just shot in the community, openly," Anderson said.

Chicago police said Officer James Armstrong shot and killed Willis, but also shot the teen in the arm. Chief Anderson hopes experts can take another look at the evidence.

"At least two pops are heard just prior to Officer Armstrong's rifle going off," Anderson said.

"The problem is the evidence, the video, makes very clear that it was Officer Armstrong that shot Rylan Wilder," said Tim Cavanagh, an attorney for the Wilder family.

Cavanagh said the family is in the middle of an ongoing lawsuit against multiple parties, including Des Plaines and Officer Armstrong.

"They have enough problems you know in life, dealing with Rylan's horrific injuries, than to have a police chief raising invalid questions," Cavanagh said.

Wilder, the youngest musician to play a Chicago music festival, has undergone multiple surgeries. Doctors are still unsure if he will regain full use of his arm.

"The wound or wounds - which are extensive - are not consistent with a nine millimeter gun," Cavanagh said. "He could raise all the questions he wants, but it's just nonsense."