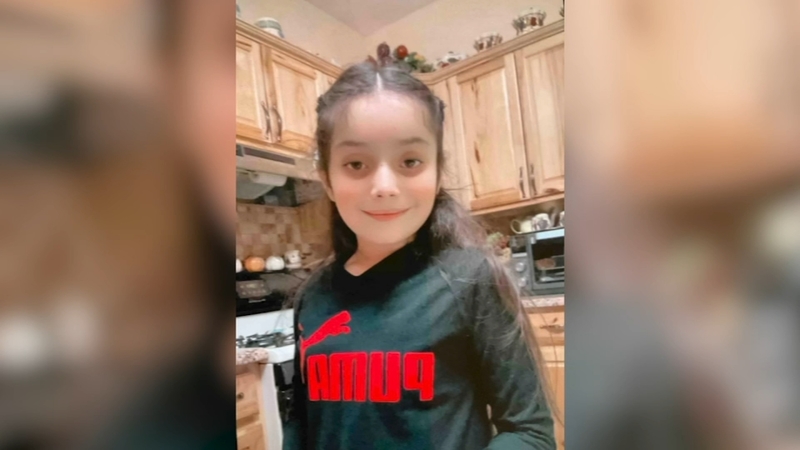 CHICAGO (WLS) -- A memorial dedicated to an 8-year-old girl that was shot and killed by a stray bullet in Chicago's Little Village Saturday continues to grow at the corner where she lost her life.

The young girl was shot in the head as her mom sought refuge from the gunfire that was erupting around them in the Southwest Side neighborhood.

The medical examiner's office identified the girl as Melissa Ortega, a student at Emiliano Zapata Academy in Little Village. The Chicago Teachers Union released a statement on her death.

"Tonight, our union mourns the loss of another student from one of our school communities. This suffering is becoming all too familiar for many of Chicago's children and families, who our educators nurture and support every day," the statement said. "The Chicago Teachers Union sends its love to Melissa's family and the Zapata Academy community, and wish them peace and healing from this heartbreaking tragedy."

Dozens of people gathered at the corner of Pulaski and 26th Street Sunday to express their grief and their outrage over the death of a little girl most of them never even met. The crowd swelling to the point where it spilled out onto what is, especially on Sundays, a very busy street.

Police officers and activists took advantage of the crowd as they handed out fliers, hoping to get any information that leads them to their shooter.

Residents and community members gather to remember Melissa Ortega. If you have any information contact the @Chicago_Police or leave an anonymous tip at https://t.co/tiYRTLc0eV. #CPDMediaCar

"This child that was killed. Her life did matter. She had a life. Her family wanted to give her a better life," said Elizabeth Ramirez, with Families Seeking Justice.

Ortega was walking with her mother in the 4000 block of West 26th Street. around 2:45 p.m. Saturday when the alleged shooter was dropped off in a vehicle, got out of the car and began firing, Chicago police said.

Investigators said her mother heard the shots and found the girl had been struck by the gunfire. Ortega later died at Stroger Hospital, police said.

SEE ALSO: I Am A Gentleman hosts meeting in Oak Lawn to address gun violence against children

Neither the girl nor her mother were the intended target, police said.

"I am outraged and heartbroken that yet another young child's life was cut short -- a senseless, heartbreaking casualty of the gun violence that plagues our Little Village community. Melissa Ortega could have been any of my grandchildren and instead of living out her dreams, she was struck down by a stray bullet. I feel her parents' pain and anger. How many children must we lose before we change course," said Little Village residentCongressman Jesús "Chuy" García (IL- 04).

A 26-year-old man, who police said was the intended target, was also shot in the back and transported to Mount Sinai Hospital in critical condition.

Authorities have not said if the victims knew each other.

"You discharged that weapon on a little 8-year-old girl. I don't care who your targets were. You targeted that little girl. Because if you weren't targeting that little girl, she would still be living here today," said crisis responder Andrew Holmes.

Another 8-year-old-girl was sitting in the backseat of a car when the window was shot out during the shooting, police said. She was not struck.

"I'm asking that area over there and any individual that knows anything about this shooting, stand up for this baby! Let's give this individual up. The baby is coming out of this hospital riding to the medical examiner's office," Holmes said. "This should've never happened!"

Now, detectives are left to solve yet another crime in the city that claimed another life far too soon.

Ocampo said, ironically, he was at a nearby funeral home when he heard the shots.

"I just froze and just sat down. I didn't know what happened. I just sat there," Ocampo said. "It really isn't safe. There's a lot of crime here supposedly and there's a lot of shootings. This is like gang territory."

This shooting happened as many businesses were open in the area.

Police are looking through surveillance video, but have yet to give a description of the shooter.

Ortega's family was not at the memorial Sunday, but those in touch said the mother and child only moved to Chicago from Mexico a few months ago in search of a better life.

Her relatives are now trying to raise enough money to take her body back to her hometown for burial.

"Our country must address the root causes of violence on our streets. Though justice and fairness will never bring Melissa back to us, we must commit to end the scourge of gun violence and the lack of opportunity that haunts communities like ours across this country. Working class communities need access to affordable housing, education, healthcare, and living-wage jobs. Our neighborhoods and families cannot wait," García added. "I join her family and our neighbors in praying for Melissa and for an end to the violence that plagues our city. Today we mourn, tomorrow we turn our grief into collective action."

The shooting follows a violent week in the city that saw at least five children shot on Tuesday alone.

On Twitter, Mayor Lori Lightfoot encouraged anyone with information about the shooting to come forward.

We wake today to the murder of 8-year-old Melissa in Little Village.

Amy and I send our sincerest condolences to this heartbroken family and shattered community.

"We cannot let fear cause us to lose our humanity," Lightfoot said. "Please come forward so that Melissa's family will know that there is justice for her."

"There may be a temptation by some to take matters into their own hands to avenge Melissa's murder," Lightfoot said. "Do not compound one tragedy with a series of others. In this time of grief, promote peace, not more violence."

Chicago Police Department Superintendent David Brown also issued a statement on Twitter encouraging people to report any information they may have about the deadly shooting.

Fear and violence, guns and gangs have no place in this city, and it will take all of us working together to stop it. If you have any information about this senseless crime, please call our anonymous tip line: 833-408-0069. Eligible tips can receive a reward of up to $15,000.

"Fear and violence, guns and gangs have no place in this city, and it will take all of us working together to stop it," Brown said. "If you have any information about this senseless crime, please call our anonymous tip line: 833-408-0069. Eligible tips can receive a reward of up to $15,000."