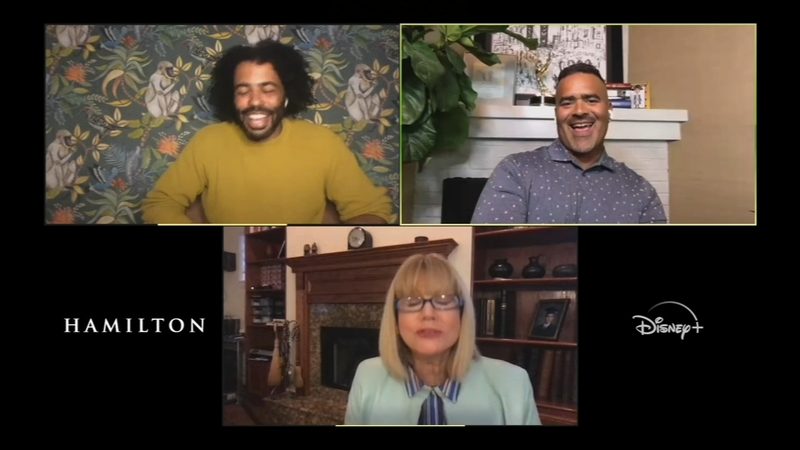 CHICAGO (WLS) -- "Hamilton" stars Daveed Diggs and Christopher Jackson say they both believe the musical, which starts streaming on Disney+ Friday, has a message about revolution for our troubled times.

"A lot of people are feeling very passionate about not allowing business as usual to continue, in terms of how we govern ourselves, how we police ourselves, all of these things," said Diggs, who plays Thomas Jefferson and Marquis de Lafayette. "I've been Black my whole life, so this feeling is not a new one to me. 'Hamilton' has an opportunity, by the way the show was built itself, to help the conversation continue further past the moment where it stops making headlines."

The legacy of George Washington has been challenged during the latest wave of protest and unrest. Jackson played America's first president in the original Broadway production of "Hamilton."

"Facts need to be facts; he is a man who is capable of a great deal and he failed in a great way," Jackson said. "There are plenty of people that we've always celebrated, we've venerated them, but we didn't vet their history."

Jackson, a native of Cairo in downstate Illinois, dreamed big as a kid but didn't necessarily imagine being part of something as iconic in entertainment history as "Hamilton."

"Dreams are funny that way, they always end up bigger than what you imagined. I'm part of a fantastic, creative brotherhood that puts a lot of good things out into the world, and that I can be part of it, I'm representing Cairo until I die, so I'm very happy to be there," he said.

The filmed version of the "Hamilton" Broadway production begins streaming on Disney+ Friday. You need a subscription to watch it.