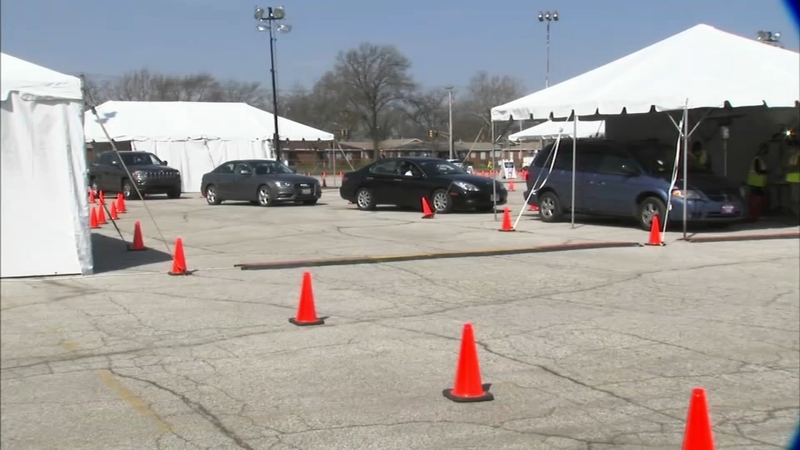 INDIANAPOLIS (WLS) -- Gary, Indiana is at the center of the state's ongoing push to get Hoosiers vaccinated.

A new mass vaccination site at the old Roosevelt High School opened Tuesday in Gary as the state lifted its mask mandate.

The advisory from Gov. Eric Holcomb allows municipalities to make their own rules on where and when Hoosiers will have to mask up. It went into effect at midnight Tuesday.

Holcomb's amended mask advisory will still require masks in schools and state-owned buildings, as well as at COVID testing and vaccine sites.

"I am appreciative that he lets the local authorities make their own decisions, but I think it sends a mixed message to people that we are at the end," Gary Health commissioner Roland Walker said.

Right now, Walker said he is keeping a close eye on the rising number of COVID-19 cases, adding that he's seen two large spikes in the past few weeks.

The city of Gary, like several other communities, has decided to keep its mask mandate in place for the foreseeable future.

"We want to make sure there are no barriers to anyone getting vaccinated," said Dr. Kristina Box, Indiana Health Commissioner. "If you are eligible, if you are 16 and older, you can get the Pfizer vaccine."

The site, which officially opens on Wednesday, has the capacity to provide up to 2 thousand shots per day. An additional 1,000 doses are also available through the mobile vaccination units.

"The federal government has said we will have enough vaccine in the coming weeks to do this," Box said.

Officials plan to vaccinate at least 100,000 people in the next eight weeks.

"Right here in Gary, Indiana we are turning that light brighter and brighter every day," Box said.

The site opened on the same day that Indiana Gov. Eric Holcomb chose to lift the state's mask mandate. He insisted he made the change based off data.

"I am liberated from any political motivation," Gov. Holcomb said.

Holcomb's amended mask advisory will still require face coverings in schools and state-owned buildings, as well as at COVID testing and vaccine sites.

The city of Gary, like several other communities, has decided to keep its mask mandate in place for the foreseeable future.

"I still could not be any more clear about the need to play this through until the very end," Holcomb said.

As COVID rates in the state climb, top health officials are preparing for another spike in cases.

"We will expect that the numbers will go back up after spring break, after NCAA, after Easter," Box said. "We ask you to continue those mitigations."

She emphasized the importance of vaccinating Hoosiers as quickly as possible.

"We are seeing an increase in cases in our younger population," Box said.

"That is why we are trying to get the message out that we want those 20, 30, 16-year-olds, to get out and get vaccinated. They want their lives back."

IN Gov. Holcomb announced the opening of a mass COVID vaccination site Tuesday in Gary.

Initially the site will use the Pfizer vaccine which requires two doses, and for the last two weeks of the eight-week program, they will use the Johnson and Johnson vaccine, which has just one dose.

Government officials said Gary's diverse population makes it attractive in their effort to reach areas hard-hit by COVID-19. They said 1 million people live within a 30-minute drive of the high school, and nearly two-thirds are African American or Hispanic.

An additional 1,000 doses per day will be allocated to mobile units that will host clinics in underserved communities throughout northern Indiana.

Overall, 12,679 Indiana residents have died from COVID-19 and 692,240 have contracted it since the start of the pandemic.

Indiana lawmakers vote to boost their power over emergencies

Indiana legislators have voted to give themselves more authority to intervene during emergencies declared by the governor.

The votes on Monday in the House and Senate will go to Republican Gov. Eric Holcomb, who has questioned whether the proposal is allowed under the state constitution and said last week he would veto it.

Holcomb has faced criticism from some conservatives over coronavirus restrictions he's imposed by executive order over the past year.

Republican legislative leaders praise the governor's actions during the pandemic but say the bill is meant to allow the input of lawmakers during extended emergency situations.