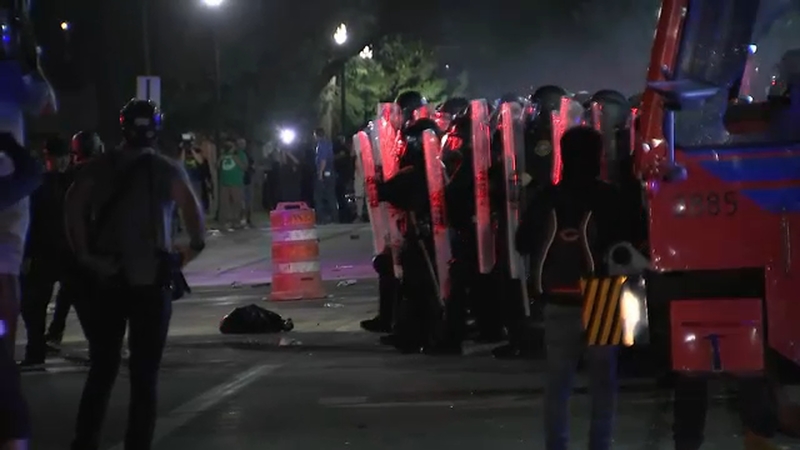 The National Guard has been called in again, and a curfew is in effect for a second night.

The oppressive August humidity and decades of racial tension reignited by video of police shooting Jacob Blake in the back is imploding the small city.

Earlier in the evening there were small gestures of peace, attempts at healing. Two straight nights of destruction have left the city a skeleton of itself.

"I'll be in front of my house and so will my neighbors," said Robert, an armed citizen who declined to give his last name. "Everybody's on edge. This is ridiculous."

"What a lot of people assume is I'm on the other side, I'm not. When I saw that video of that man being shot int he back by police, I was disgusted," said Kevin Matthewson, a former Kenosha alderman. "I agree with them on most of what they're saying, let's just keep it peaceful."

National Guard and riot deputies filed into the now fortified courthouse, but other than that police, or any law enforcement, are practically invisible. Protesters are again occupying a center square, but on the streets there's a small line of defense

"If you gonna be down here, come here correct. Talk to us, let us know how we can fix this together," Franklin said. "Of course we take your help, but you not going to come in here, take over the situation, tear down our city, our resources for our kids and family, and think you gonna go back home. No, no, no."

Police in riot gear cleared protesters from the park they were occupying shortly before 10 p.m.

The Kenosha Common Council called an emergency meeting Tuesday afternoon to discuss a response to the unrest that set buildings and cars on fire Monday night. They voted to put an emergency declaration into place until Friday.

Kenosha residents came out to clean up after a second night of unerst and fires following the shooting of Jacob Blake by a Kenosha police officer.

A council member told the ABC7 I-Team the details of the declaration were still unclear.

Overnight, multiple buildings burned as protests turned violent again in Kenosha. The epicenter of the unrest was near Civic Center Park.

"It just seemed like something out of a dream," said resident Jasmine Davis. "You know, it was just very devastating. I could not rest, literally I was up all night."

Protesters are angry about the police shooting of 29-year-old Jacob Blake, an unarmed Black man who was shot seven times in the back in front of his children on Sunday.

Personal insults and full water bottles flew from the crowd into a line of Kenosha police guarded by riot gear.

Buildings in downtown Kenosha were damaged, tagged, surrounded by broken glass. Some were burned beyond repair.

"So close, where I literally could see the flames before I came off my porch," Davis said.

As the sun came up in Kenosha, buildings along 60th Street near 11th Avenue continued to smolder.

With help from volunteers and his family, Abel Alejo cleaned up what was left of his taco shop and convenience store. He said even after the cleanup, the destruction has put him out of business.

"I know what happened here in Kenosha with the police shooting. But I think there are better ways to deal with the issues than destroying the neighborhood," he said.

"I can understand the anger, but this right here is ridiculous," said Kenosha resident Edward West. "Tearing up our own community."

For many longtime Kenosha residents the damage to their town is heartbreaking, even as many say they understand the anger and frustration many feel over the police shooting of Jacob Blake.

The Kingdom Word Ministry Church is the only building on the block without serious damage.

"We're looking at it as a miracle. The only thing standing is a church. Hopefully it's a symbol to the world that can bring some peace," said Pastor David Montgomery.

David Raymber loaded what he could of his possessions into his van and headed out. He said he and other residents stood outside their apartment building last night to protect it from crowds destroying other buildings, but he won't be here to do it again Tuesday night.

"They have told us to get out if we can and only take what's necessary," he said.

"I moved up here two months ago and the community has been so good to me and when this happens," he said. "I can't not give back."

Lumber to cover up windows is in short supply.

"We are cleaning up but we need boards. There aren't any in town or in any other towns nearby. We've checked and there is none," said volunteer Tanya McLean.

And some saw the opportunity for growth and change from this unsettling time.

Hot spots kept popped up inside what's left of this Department of Corrections building as fire crews rushed to several fires overnight.

"He should be charged with attempted murder," he said. "There was nothing that could justify you using a tool that kills people against my nephew, who had virtually done nothing wrong and broken no laws."

Blake's family said he is being treated at a Milwaukee hospital, where he is in stable condition.

Kenosha police are asking people to withhold passing judgement until all the facts are known. Blake's uncle called on people to stay peaceful.